(RNS) — Bishop Vashti McKenzie, a recently retired bishop of the African Methodist Episcopal Church, has been named the interim president and general secretary of the National Council of Churches, the ecumenical organization announced Tuesday (May 10).

McKenzie succeeds Jim Winkler, who left the post on Jan. 31 after serving in the role since 2013. She officially started on April 1 and is expected to serve a two-year term.

The NCC announced the transition as it welcomed the bishop to her first business meeting of the organization, which includes 37 member denominations from Protestant, Anglican, historic African American, evangelical, Orthodox and peace church traditions.

“The National Council of Churches is blessed to have Bishop McKenzie in this key leadership role,” said Bishop Teresa Jefferson-Snorton, board chair, who is also the leader of Christian Methodist Episcopal Church congregations in Florida and Alabama, in a Tuesday statement. “She brings the necessary insight, expertise, and ecumenical commitment to the Council.”

McKenzie is the first woman to serve in the combined role of general secretary and president of the NCC. She is the third woman and first African American woman in the general secretary post. She retired in July from the AME Church, after being named as bishop in 2000, the first woman to hold the title in the historically Black denomination’s more-than-200-year history.

“I look forward to the opportunity to enhance the great work that the NCC has already done and look for strategic ways to amplify its voice,” McKenzie said in a statement. “It is critical in this season of divisiveness in our country that we remain vigilant and visible advocates and bridge builders.”

Her previous ecumenical work, in roles such as delegate and preacher, includes the World Council of Churches and the World Methodist Council.

Officially founded in 1950, the NCC has its roots in the Federal Council of Churches that started in 1908. The organization has made combating racism a core aspect of its work in recent years.

Last week, the board held a retreat in Montgomery, Alabama, with programs that expanded upon NCC’s “A.C.T. NOW to End Racism” initiative that was started in 2018. 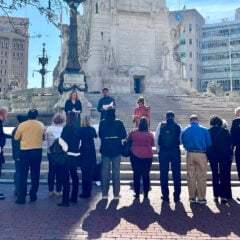