(The Conversation) — The leaked draft of Justice Samuel Alito’s opinion in Dobbs v. Jackson Women’s Health Organization, which has sent shock waves across the United States, indicates that a majority of Supreme Court justices will likely overturn the constitutional right to an abortion granted in Roe v. Wade. Employing unusually harsh language, Alito declared that “Roe and Planned Parenthood v.Casey must be overruled” because of the decisions’ “abuse of judicial authority.”

“Roe was egregiously wrong from the start,” Alito wrote, and its “reasoning was exceptionally weak.”

He also asserted that neither abortion nor privacy is mentioned in the text of the Constitution, nor should they be considered to be “deeply rooted in the Nation’s history or traditions” so as to be worthy of protection.

As a professor of constitutional law who has taught about reproductive rights for more than 20 years, I argue that Alito’s legal reasoning leaves out several established constitutional principles also not mentioned in the text – such as separation of powers and executive privilege – as well as rights that conservatives hold near and dear like the right to marry and parental rights.

Alito’s claim that a right to an abortion “was entirely unknown in American law” until Roe is unfounded. Historically, abortion was not completely illegal, even in Puritan New England. The first abortion restrictions were enacted in the U.S. in the 1820s.

Even then, they generally outlawed abortions only after “quickening,” the early equivalence of fetal viability – the ability to survive outside the mother’s womb. Alito’s legal rationales aside, the legal debate over abortion is as much a religious dispute as it is a constitutional one. 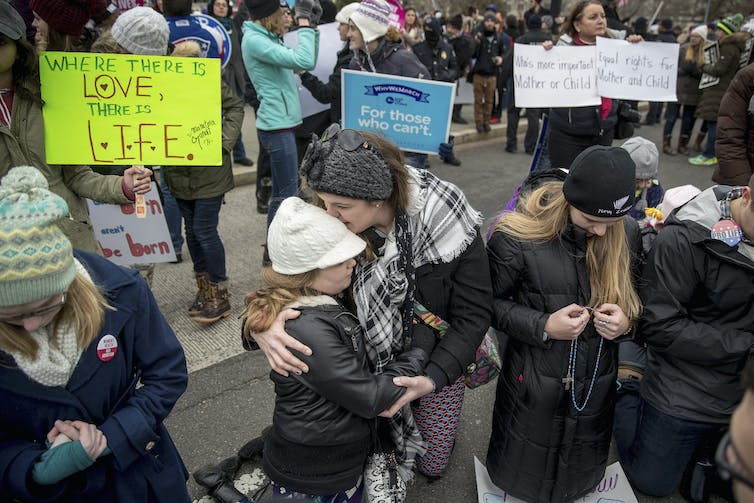 Anti-aboriton activists kneel and pray in front of the Supreme Court Building during the annual March for Life in 2017.
AP Photo/Andrew Harnik

Most anti-abortion rallies have signs and banners with religious admonitions such as “pray for life” and “pray to end abortion.”

Today, the Catholic Church’s strong opposition to abortion and contraception is well known. However, in an interesting recent book, “Abortion in Early Modern Italy,” historian John Christopoulos argues that prior to 1588, the Catholic Church’s position on abortion was more ambiguous. Before then, the church did not necessarily oppose abortion before quickening, but in that year shifted its position through a papal declaration that pronounced that the human soul is created at the moment of conception, known as “ensoulment,” and that all abortions were murder.

In addition to Catholic groups such as Priests for Life, opposition to abortion is driven by other conservative groups with Protestant members, including the Faith and Freedom Coalition and the Family Research Council.

More militant anti-abortion groups such as Operation Rescue and Operation Save America also state their opposition on religious grounds. According to one OSA official, “Satan wants to kill innocent babies, demean marriage and distort the image of God.”

As philosopher Peter Wenz argued in his book “Abortion Rights as Religious Freedom,” one’s opinion about whether a pre-viable fetus is a person is a religious decision. Abortion restrictions interfere with this right to religious freedom.

Several liberal denominations agree. A 1981 resolution of the United Church of Christ declares that “every woman must have the freedom of choice to follow her personal and religious convictions concerning the completion or termination of a pregnancy.” And according to the National Council of Jewish Women, Jewish law does not recognize a fetus to be a person but instead teaches that abortion is permitted and even required when a woman’s health is endangered.

Yet for conservative Christians who believe that life or ensoulment begins at conception, there can be no compromise on the issue of abortion. And the issue of abortion has long been a priority among conservatives in a way not shared by liberals. This helps explain much of the staying power in the anti-abortion movement. Fifty years of legal precedent support the right to abortion. But anti-abortion activists’ moral certainty about the issue is so strong that, in their eyes, even this half-century of precedent seems destined to crumble.

After all, they reason, legal rules and principles are rarely absolute. For them, the religious certainty about the wrongness of abortion provides an answer that the law lacks.

(Steven K. Green, Professor of Law, Director of the Center for Religion, Law & Democracy, Willamette University. The views expressed in this commentary do not necessarily reflect those of Religion News Service.)