(The Conversation) — The Catholic Church’s official line on abortion, and even on any artificial birth control, is well known: Don’t do it.

Surveys of how American Catholics live their lives, though, tell a different story.

The vast majority of Catholic women have used contraceptives, despite the church’s ban. Fifty-six percent of U.S. Catholics believe abortion should be legal in all or most circumstances, whether or not they believe they would ever seek one. One in four Americans who have had abortions are Catholic, according to the Guttmacher Institute, which advocates for reproductive health.

It’s a clear reminder of the complex relationship between any religious tradition’s teachings and how people actually live out their beliefs. With the U.S. Supreme Court poised to overturn Roe v. Wade, the 1973 ruling that protects abortion rights nationwide, religious attitudes toward a woman’s right to end a pregnancy are in the spotlight. But even within one faith, there is no one religious position toward reproductive rights – let alone among different faiths.

As a scholar of gender and religion, I research how religious traditions shape people’s understandings of contraception and abortion.

When it comes to official stances on abortion, religions’ positions are tied to different approaches to some key theological concepts. For instance, for several religions, a key issue in abortion rights is “ensoulment,” the moment at which the soul is believed to enter the body – that is, when a fetus becomes human.

The catch is that traditions place ensoulment at different moments and give it various degrees of importance. Catholic theologians place ensoulment at the moment of conception, which is why the official position of the Catholic Church is that abortion is never permitted. From the moment the sperm meets the egg, in Catholic theology, a human exists, and you cannot kill a human, regardless of how it came to exist. Nor can you choose between two human lives, which is why the church opposes aborting a fetus to save the life of the pregnant person.

As in any faith, not all Catholics feel compelled to follow the church teachings in all cases. And regardless of whether someone thinks they would ever seek an abortion, they may believe it should be a legal right. Fifty-seven percent of U.S. Catholics say abortion is morally wrong, but 68% still support Roe v. Wade, while only 14% believe that abortion should never be legal. 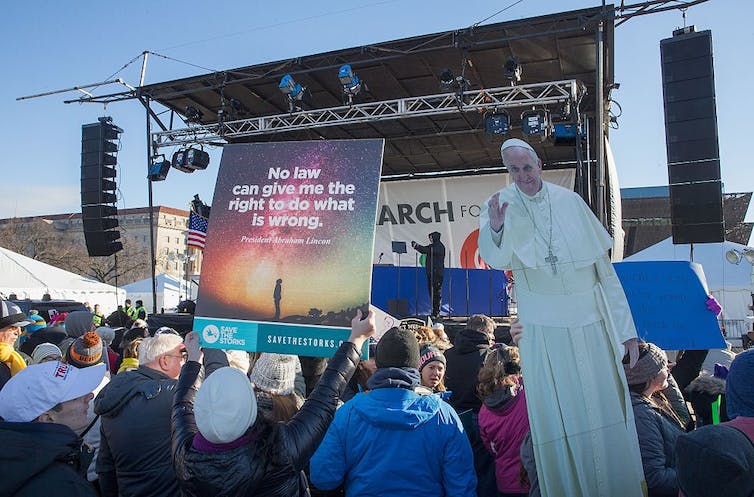 People opposed to abortion gather at the Washington Monument during the 2017 March for Life rally in Washington, D.C.
Tasos Katopodis/AFP via Getty Images

Some Catholics advocate for abortion access not despite but because of their dedication to Catholic teachings. The organization Catholics for Choice describes its work as rooted in Catholicism’s emphasis on “social justice, human dignity, and the primacy of conscience” – people making their own decisions out of deep moral conviction.

Other Christians also say faith shapes their support for reproductive rights. Protestant clergy, along with their Jewish colleagues, were instrumental in helping women to secure abortions before Roe, through a network called the Clergy Consultation Service. These pro-choice clergy were motivated by a range of concerns, including desperation that they saw among women in their congregations, and theological commitments to social justice. Today, the organization still exists as the Religious Coalition for Reproductive Choice.

There are myriad Protestant opinions on abortion. The most conservative equate it with murder, and therefore oppose any exemptions. The most liberal Protestant voices advocate for a broad platform of reproductive justice, calling on believers to “Trust Women.”

Muslims scholars and clerics, too, have a range of positions on abortion. Some believe abortion is never permitted, and many allow it until ensoulment, which is often placed at 120 days’ gestation, just shy of 18 weeks. In general, many Muslim leaders permit abortion to save the life of the mother, since classical Islamic law sees legal personhood as beginning at birth – though while many Muslims may seek out their religious leaders for guidance about or assistance with abortion, many do not.

Jewish tradition has a great deal of debate about when ensoulment occurs: Various rabbinic texts place it at or even before conception, and many place it at birth, but ensoulment is not as key as the legal status of the fetus under Jewish law. Generally, it is not considered to be a person. For instance, the Talmud – the main source of Jewish law – refers to the fetus as part of the mother’s body. The biblical Book of Exodus notes that if a pregnant woman is attacked and then miscarries, the attacker owes a fine but is not guilty of murder.

In other words, Jewish law protects a fetus as a “potential person,” but does not view it as holding the same full personhood as its mother. Jewish clergy generally agree that abortion is not only permitted, but mandated, to save the life of the mother, because potential life must be sacrificed to save existing life – even during labor, as long as the head has not emerged from the birth canal.

Where Jewish law on abortion gets complicated is when the mother’s life is not at risk. For example, contemporary Jewish leaders debate whether abortion is permitted if the mother’s mental health will be damaged, if genetic testing shows evidence of a nonfatal disability or if there are other compelling concerns, such as that the family’s resources would be strained too much to care for their existing children. 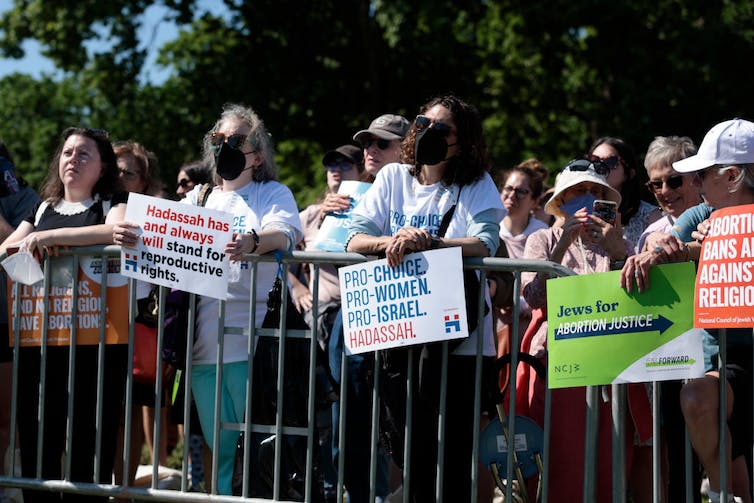 American Jews have generally supported legal abortion with very few restrictions, seeing it as a religious freedom issue – and a question of life versus potential life. Eighty-three percent support a woman’s right to an abortion, and while many might turn to their clergy for support in seeking an abortion, many would not see a need to.

A different view of life

As much diversity as exists in Christianity, Islam, and Judaism, there is likely even more in Hinduism, which has a range of texts, deities and worldviews. Many scholars argue that the fact so many different traditions are all lumped together under the umbrella term “Hindusim” has more to do with British colonialism than anything else.

Most Hindus believe in reincarnation, which means that while one may enter bodies with birth and leave with death, life itself does not, precisely, begin or end. Rather, any given moment in a human body is seen as part of an unending cycle of life – making the question of when life begins quite different than in Abrahamic religions.

Some bioethicists see Hinduism as essentially pro-life, permitting abortion only to save the life of the mother. Looking at what people do, though, rather than what a tradition’s sacred texts say, abortion is common in Hindu-majority India, especially of female fetuses.

In the United States, there are immigrant Hindu communities, Asian American Hindu communities, and people who have converted to Hinduism who bring this diversity to their approaches to abortion. Overall, however 68% say abortion should be legal in all or most cases.

Buddhists also have varied views on abortion. The Religious Coalition for Reproductive Choice notes: “Buddhism, like the other religions of the world, faces the fact that abortion may sometimes be the best decision and a truly moral choice. That does not mean there is nothing troubling about abortion, but it means that Buddhists may understand that reproductive decisions are part of the moral complexity of life.” 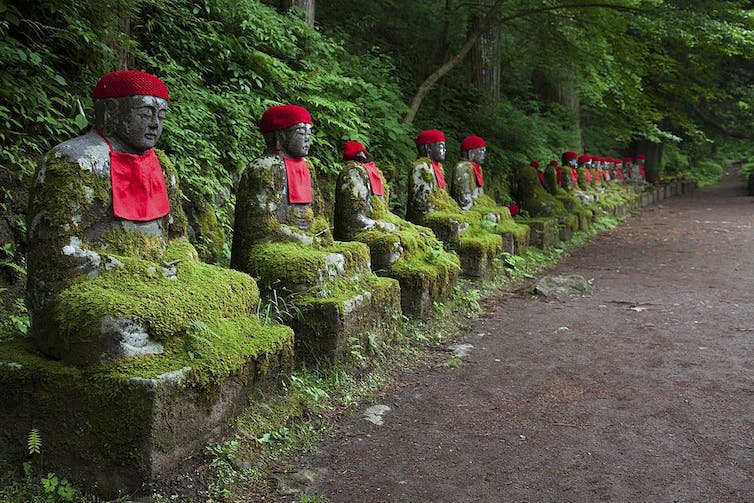 Japanese Buddhism in particular can be seen as offering a “middle way” between pro-choice and pro-life positions. While many Buddhists see life as beginning at conception, abortion is common and addressed through rituals involving Jizo, one of the enlightened figures Buddhists call bodhisattvas, who is believed to take care of aborted and miscarried fetuses.

In the end, the Buddhist approach to abortion emphasizes that abortion is a complex moral decision that should be made with an eye toward compassion.

We tend to think of the religious response to abortion as one of opposition, but the reality is much more complicated. Formal religious teachings on abortion are complex and divided – and official positions aside, data shows that over and over, the majority of Americans, religious or not, support abortion.

(Samira Mehta, Assistant Professor of Women and Gender Studies & Jewish Studies, University of Colorado Boulder. The views expressed in this commentary do not necessarily reflect those of Religion News Service.)