ANAHEIM, Calif. (RNS) — In the summer of 2008, Morris Chapman stood before a gathering of thousands of Southern Baptists in Indianapolis for their annual meeting and denounced the evil of sexual abuse.

Then, Chapman, president of the Southern Baptist Convention’s Executive Committee at the time, told his fellow Baptists the SBC would not set up a database to track abusive pastors — citing local church autonomy.

Fourteen years later, Chapman raised his hand with a yellow ballot in it on Tuesday afternoon (June 14), joining a host of other Southern Baptists meeting in Anaheim to approve a series of reforms to address sexual abuse in the nation’s largest Protestant denomination — including the creation of a website that will track abusive pastors and church workers.

The “Ministry Check” site would list those convicted of abuse, those named in a civil judgment and those credibly accused of abuse by an independent investigation.

“I was proud to support without question the final recommendations of the Sexual Abuse Task Force and even more proud as I sat on the convention floor and listened to the debate among convention messengers who had resolved to move forward now,” he said in a statement.

The 8,133 local church delegates, known as messengers, who were gathered in Anaheim seemed determined to change the direction of the 13.7 million-member denomination, reversing years of inaction and obstruction on the issue of abuse.

Last month, an investigation authorized by messengers at last year’s annual meeting in Nashville, Tennessee, found that SBC leaders had downplayed the issue of abuse in local churches for years while demonizing abuse survivors as enemies of the church.

But those survivors refused to give up and by sheer force of will and tears and tenacity eventually moved the nation’s largest Protestant denomination to action. During the meeting, SBC leaders repeatedly thanked survivors, and the messengers approved a resolution asking survivors for forgiveness for their inaction. 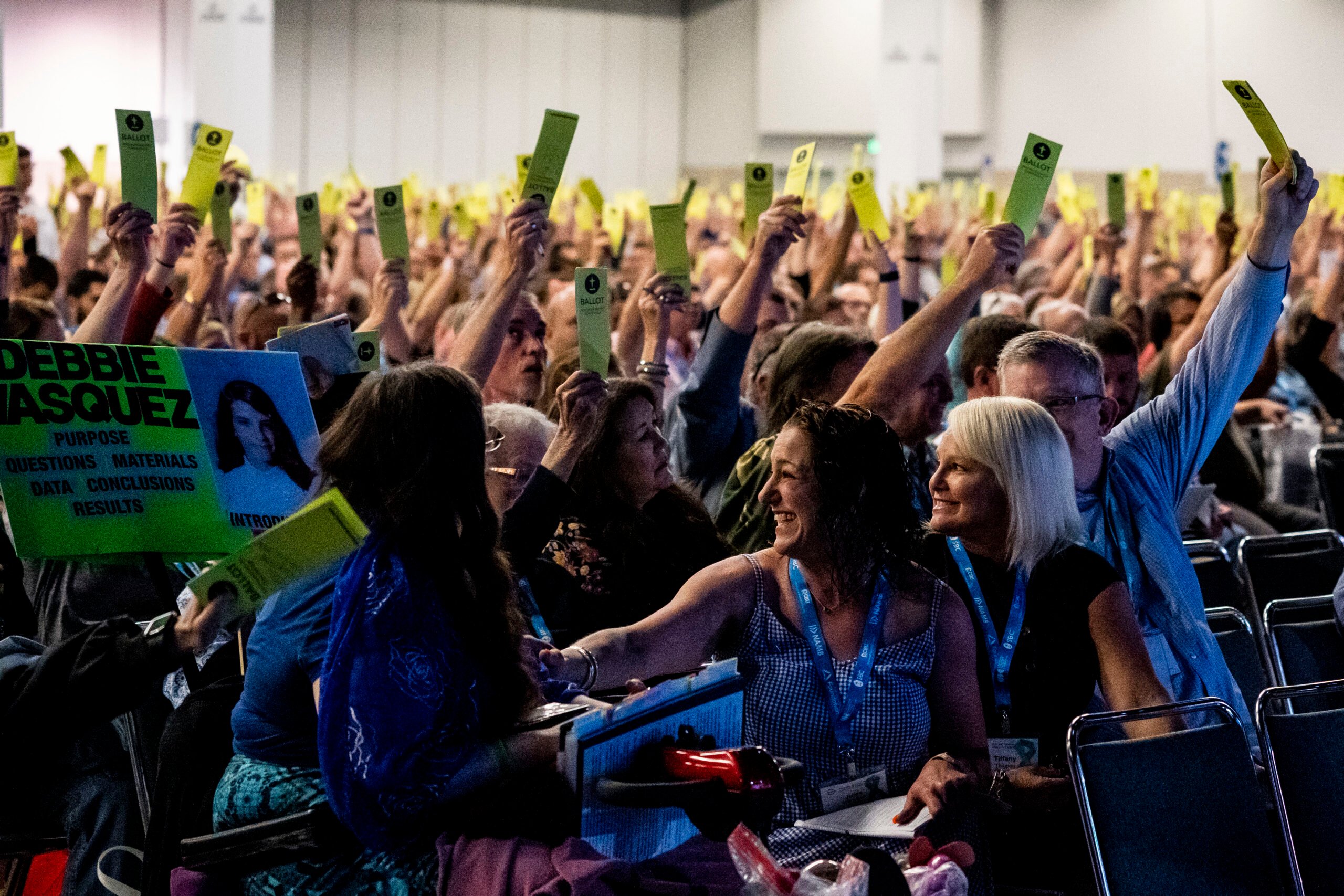 All had given their consent to be named.

“The tenacity of survivors in refusing to give up was really vital,” said Woodson.

The SBC gathering, which drew more than 10,000 people, began Sunday with a pastors’ conference, followed by two days of meetings. It was part worship service, part family reunion and mass deliberative body — guided by both the Bible and “Robert’s Rules of Order.”

The meetings swung from powerful worship and singing to moments of intense debate, overseen by Ed Litton, an Alabama pastor who has served as SBC president for the past year.

When the debate violated what longtime parliamentarian Barry McCarty named the “gentle formality” called for by Robert’s Rules, Litton gently but firmly rebuked messengers, saying he would not allow them to shout down unpopular views or disparage anyone by name.

That was difficult at times. 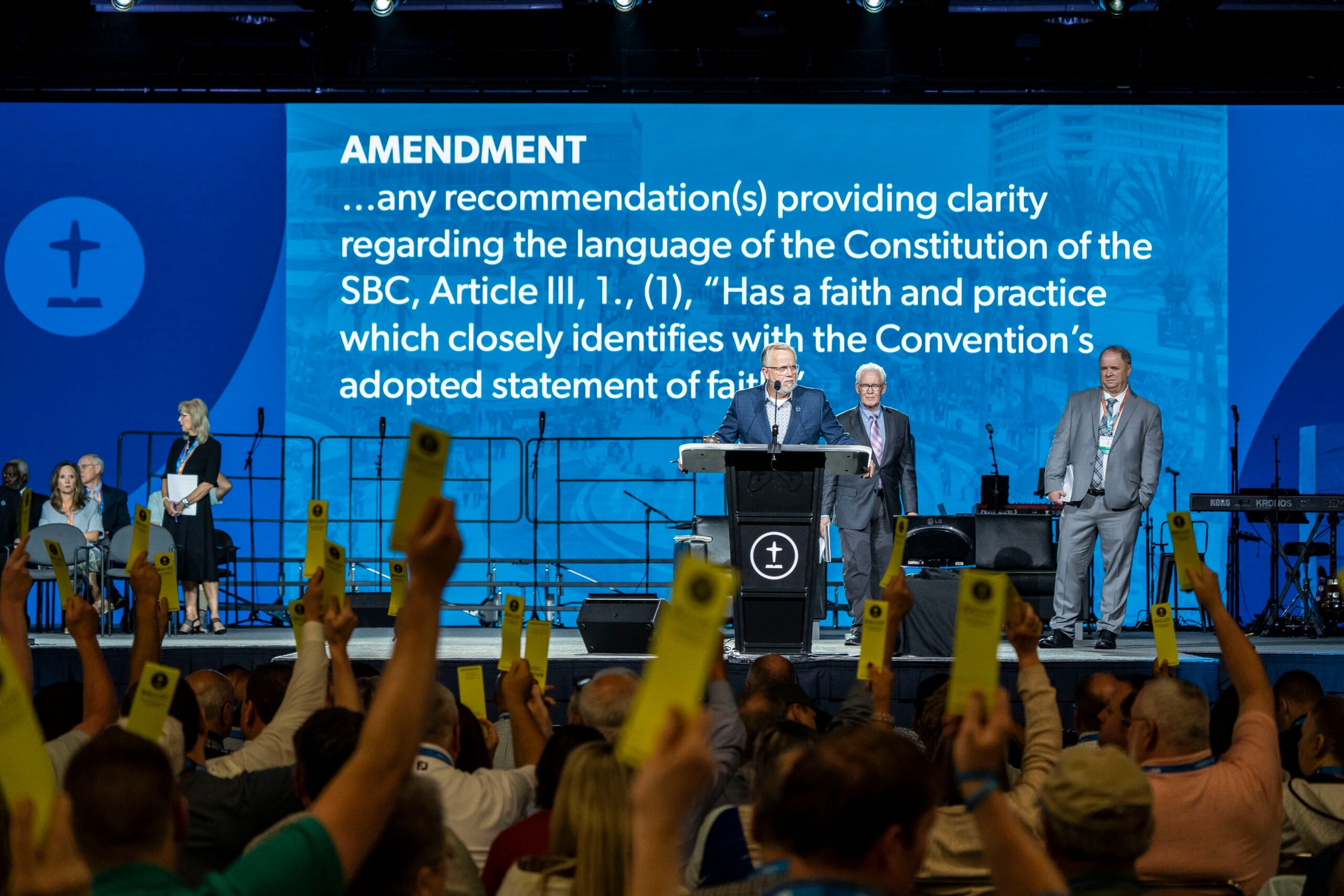 The convention has been roiled by controversy in recent years, mainly driven by a group called the Conservative Baptist Network, which believes women pastors and liberal ideas like social justice and critical race theory are invading the convention. The CBN, along with its allies, backed a pair of anti-“woke” candidates — Florida pastor Tom Ascol, who ultimately lost the SBC presidential race on Tuesday, and Voddie Baucham, a best-selling author and preacher — who are vocal critics of current SBC leadership.

During the meetings, there were disputes over the meaning of the word “pastor” as well as debates over abortion — including some messengers calling for SBC leaders to support legislation to treat women who choose abortion as murderers — and calls for investigating several SBC entities.

At several points, messengers from the floor began shouting angry responses to speakers — including the chair of a committee charged with deciding whether or not to expel a California megachurch for having women pastors and a former seminary president who claimed the SBC had no problem with sexual abuse. At other points, messengers who could not get to a microphone to speak began to shout “point of order,” trying to interrupt the proceedings.

Despite the contentious topics up for debate, Litton and McCarty also reminded Southern Baptists of the need for common courtesy.

“This is a human organization full of human beings — let’s show each other a little grace,” said McCarty at one point. Right after the reforms were passed by an overwhelming majority, Oklahoma pastor Mike Keahbone got up to pray. Before he started, Keahbone confessed he was angry with some of the messengers, especially those who had been critical of some of the abuse reforms. In one of the most moving moments of the meeting, he asked those messengers to forgive him.

“We’re brothers and sisters, we ought to be able to have hard discussions without being mean to each other and hurtful,” he said in an interview after the meeting. “There’s a line. And we were crossing it.”

Former SBC President J.D. Greear, a North Carolina megachurch pastor, summed up the determination of messengers to combat abuse during an evening workshop on trauma-informed responses to abuse. During his term as president, Greear had urged Southern Baptists to care for survivors and to expel any church that mishandled abuse.

He told those gathered for the workshop — held after abuse reforms were passed — that he’d been waiting in line at the microphone, hoping to speak in favor of those reforms. He was going to end by telling messengers: “We all know what we came here to do.”

The meetings were also filled with reminders of why Southern Baptists work together — including a “sending celebration” where messengers were introduced to 52 new missionaries on their way to join their 3,600 colleagues around the world. Paul Chitwood, head of the SBC’s International Mission Board, urged his fellow Baptists to continue to cooperate, despite their differences, so more people could learn about Jesus.

“This is why we must stay together,” he said. 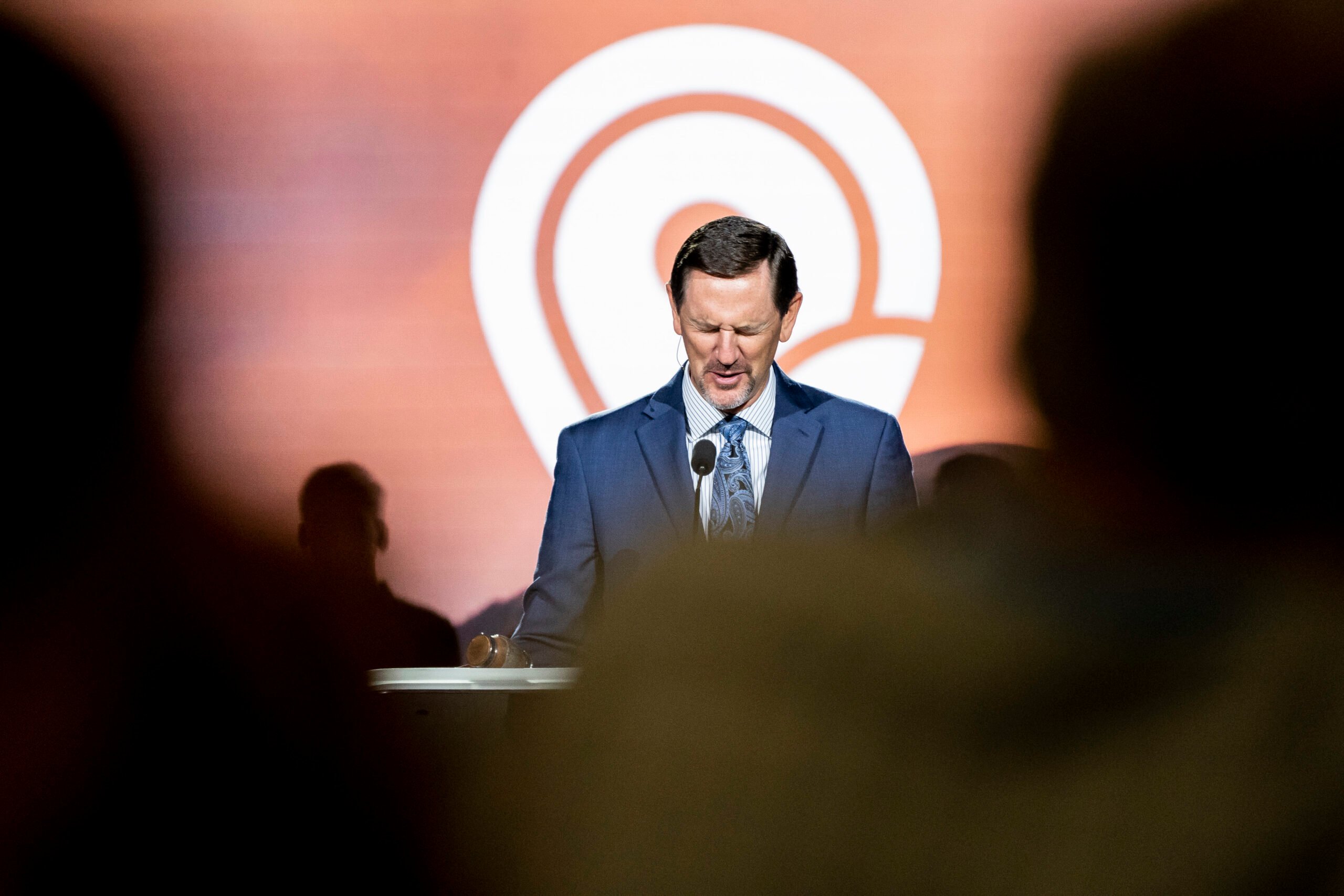 That same issue of evangelism was also raised by an unlikely source — Scarlett Nokes, an attorney at the Nashville-based Bradley law firm that represents the SBC’s Executive Committee. Bradley was hired after the SBC’s longtime lawyers quit in a controversy over the abuse investigation, but the firm had come under fire for being LGBTQ-friendly.

Standing with her pastor and two other ministers, Nokes said she joins other Southern Baptist lay people in considering secular workplaces where they are employed to be their mission field.

“I ask myself and every one of you: How does the gospel advance if we insulate ourselves from the world entirely?” she said, drawing applause. “If we’re to be the light of the world referenced in Matthew 5, we have to be in the world, not surrounded by like-minded Christians and Southern Baptists all the time.”

Outside of the convention hall, Southern Baptists greeted old friends, ate at food trucks and listened to worship music from students at California Baptist University while sitting under palm trees. Unlike the previous year’s meeting in Nashville, where street preachers with bullhorns criticized Southern Baptists for being too “liberal” and spewing angry rhetoric, the mood was festive.

A group of street preachers showed up on Sunday ahead of the pastors’ conference but gave up after their bullhorns were drowned out by worship music.

Messengers also wandered the massive exhibition area, filled with displays from Baptist colleges, seminaries, mission and disaster relief groups, as well as other vendors that ranged from a pastoral staffing firm to the Creation Museum. 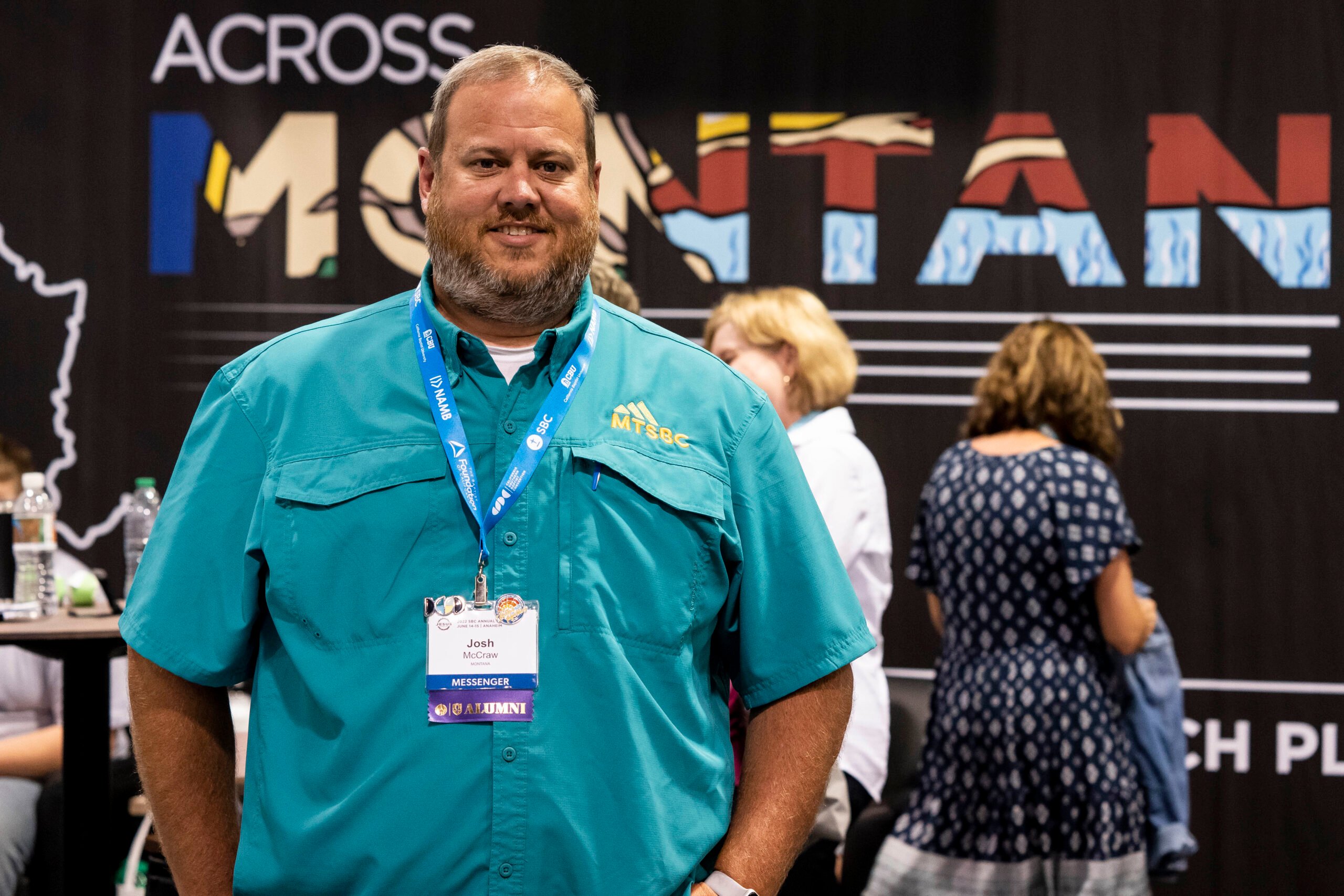 At a booth sponsored by the Montana Southern Baptist Convention, Josh McGraw, pastor of Big Horn Baptist Church, chatted with messengers, hoping to convince some of them to come to Montana to plant churches. A Mississippi native, McGraw had been a truck driver when he first felt called to ministry at age 33, seven years ago.

A pastor friend introduced him to the Big Horn church, a congregation of about 15 people, in a town that has “40 people in the winter and 300 in the summer.” After a visit and a try-out sermon — one of his first, ever — McGraw and his family moved to Montana and have been there ever since.

“I’m still learning how to preach,” he said with a smile.

Small churches like his need the convention, he said, because they can’t do everything on their own. While SBC megachurches often dominate headlines, the average church has about 65 members. McGraw works part time at the church and spends his day on staff at a water and sewer utility. He’s also taking classes at a SBC seminary online and trying to help out the state convention. That leaves little time for dealing with denominational dustups.

“I’m not really involved in that,” he said. “I’m just doing my job and I’m just sharing Jesus.”

Adelle Banks contributed to this report.