(RNS) — When the Rev. Frank Tumino, pastor of St. Augustine, walked into his Catholic church in the Park Slope neighborhood of Brooklyn on the last Saturday in May, he found physical and spiritual wreckage: Angels that had decorated the front of the building were decapitated, Communion wafers were scattered across the altar and, most shocking, an 18-karat gold tabernacle, where the sanctified Eucharist was stored, had been stolen.

According to a press release from the Diocese of Brooklyn, the tabernacle was worth more than $2 million but is “irreplaceable due to its historical and artistic value.”

This description could apply to the fixtures in many houses of worship, and the theft in Brooklyn has many assessing their security and insurance.

Leiza McKenna, a senior fine arts consultant at Church Mutual Insurance Co., a nationwide insurer of religious organizations, said her company is checking in with clients and updating their policies. 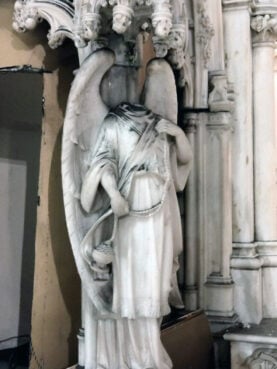 “We’re hoping that there are no copycats out there, but if there are, we feel confident that we’ve got the measures in place to protect with insurance as much as possible,” she said.

Washington National Cathedral, one of the country’s largest and most-visited houses of worship, makes constant security a priority, said Kevin Eckstrom, chief communications officer of the cathedral. “We have rare items that are always being watched because of their value and heritage,” he said, citing statues of the Rev. Martin Luther King Jr. and Mother Teresa as among its most precious furnishings (along with its 10-bell peal and carillon, though, at more than 2 tons, these would be difficult to make off with).

But not all religious organizations have the resources to protect their possessions, said Eric Spacek, the assistant vice president of risk control at Church Mutual Insurance Co. Nor do houses of worship typically take the same approach to security other public places and businesses do.

“Houses of worship tend to be trusting places,” Spacek said. “Plus, there are budgetary restrictions in many churches. Their security could be seen as a volunteer effort.”

After a man entered the San Fernando Cathedral in San Antonio, believed to be the nation’s oldest, and toppled century-old statues, the cathedral reassessed its security. Today, said its business and finance manager, Elizabeth Cardenas, its coverage is “extensive.” 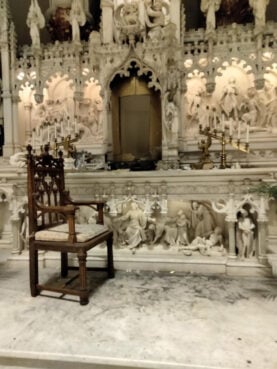 Insurance, of course, can only cover material goods, as members of St. John the Evangelist Catholic Church in Hydes, Maryland, realized recently. Just two months before the Brooklyn break-in, the 200-year-old church was similarly violated when its tabernacle was stolen.

The theft felt baffling, said Megan Malkus, St. John the Evangelist’s communications coordinator and a lifetime member of the church. “That kind of stuff just doesn’t happen here,” said Malkus. “It opened our eyes to the fact that bad things happen to good people.”

In the weeks since the robbery, a donor supplied St. John the Evangelist with a new tabernacle, which is now bolted into place. The church also installed a new security system.

Malkus said the church community’s most valuable response was to unite in the face of adversity, and she advised St. Augustine’s congregation do the same.

“Sure, the tabernacle can be replaced because of its monetary value, blah, blah, blah,” said Malkus. “But, in our minds, someone came in and stole Jesus from the church. Still, through Christ, we can all come together and support each other.”

RELATED: RIP Catholic News Service — gone too soon and when we needed you most