He never saw himself starring in a documentary about the Roman Catholic Church’s relationship with its LGBTQ members.

He never set out to write or speak on issues related to LGBTQ people and the Catholic Church at all, he said.

And yet a film chronicling Martin’s ministry to LGBTQ Catholics — “Building a Bridge,” which was produced by Oscar-winning filmmaker Martin Scorsese and premiered last year at the Tribeca Film Festival — is streaming now on AMC+.

The documentary release comes as Martin launches an LGBTQ Catholic resource called Outreach, sponsored by America Media, where he is editor at large. Outreach includes a new website and a conference hosted in person for the first time this weekend at Fordham University in New York.

“I really feel like it’s been an invitation from the Holy Spirit to just continue to see where this goes,” Martin said.

The idea for the documentary about Martin’s ministry came to Brooklyn-based filmmaker Evan Mascagni not long after he moved to New York. Mascagni had grown up in a “really Catholic” community in Kentucky — so Catholic, he joked, he didn’t even realize there were other religions — but he had distanced himself from the church in college. 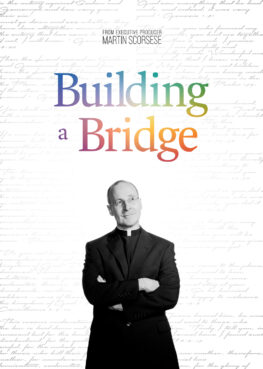 His mom kept sending him posts by “this cool priest she follows on Instagram,” who also was based in New York, he said.

When he finally attended a talk by the priest, who turned out to be Martin, Mascagni said he was “blown away.”

“I’d never felt energy like that in a Catholic church, honestly,” he said.

Mascagni also realized Martin’s story dovetailed with a story that co-director Shannon Post wanted to tell about a friend of hers who was among the 49 people killed when a gunman opened fire at the Pulse nightclub in Orlando, Florida.

Pulse was one of the city’s best-known gay clubs, and the 2016 shooting was the deadliest mass shooting in modern U.S. history at the time.

The response to the shooting — or, rather, the lack of response — by the Catholic Church was one of the reasons Martin said he first felt “emboldened” to write and speak publicly about the church’s relationship with LGBTQ people, he said.

“I was a little disappointed with the church’s official response to the massacre. What struck me at the time was that even in death, this community is largely invisible to the Catholic Church,” he said.

The filmmakers began following Martin not long after his book “Building a Bridge: How the Catholic Church and the LGBT Community Can Enter Into a Relationship of Respect, Compassion, and Sensitivity” was published in 2017. They filmed as some of the priest’s talks were canceled over fears of protest by conservative Catholic websites such as Church Militant, which also have organized social media campaigns against him. They kept rolling as he celebrated a Pre-Pride Mass at St. Francis of Assisi Church in New York and met at the Vatican with Pope Francis, who later wrote to Martin about the Outreach conference, previously held online.

“I pray for you to continue in this way, being close, compassionate and with great tenderness,” Francis wrote.

In that time, Martin said he’s become more confident — “primarily because I had that meeting with the pope.”

The priest’s message to the church has become “a little bolder,” he said.

“At the beginning, it was just like, ‘Treat these people with respect.’ Now it’s more, ‘Listen to them, accompany them, advocate for them,’ which is something I might not have said before.”

He sees the film as part of that work.

“I know that 1,000 times more people will see this movie than ever read my book or come to one of my talks. I understand the power of the media, and so, therefore, I wanted to support them as much as I could,” he said. 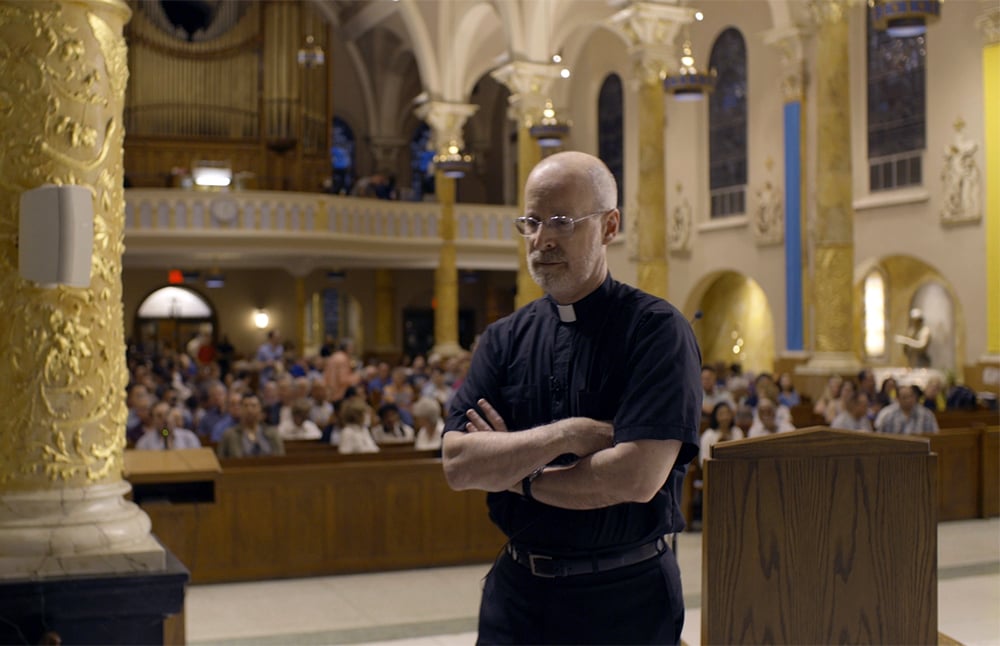 Martin said he realized Mascagni and Post were serious about making a documentary about his ministry when they showed up in Dublin, where he was invited to speak to the World Meeting of Families organized by the Vatican’s Dicastery for the Laity, Family and Life.

Being followed by cameras was “a threat to humility” as a priest, he said. But it came at the same time opponents were bombarding him with messages he was going to hell, so, he joked, “it balanced.”

It isn’t his first brush with fame. Martin has appeared on “The Colbert Report” and “The Late Show With Stephen Colbert” as the unofficial chaplain of Colbert Nation. He also has worked with Scorsese on two previous films, appearing as a priest in “The Irishman” and offering insight as a consultant for “Silence.”

Scorsese ended up becoming executive producer of “Building a Bridge” after hearing the documentary was in the works and reaching out to Mascagni and Post.

“If Martin Scorsese is asking you to see a rough cut, you’re gonna work as hard and as fast as you can to get it done,” Mascagni said, laughing.

Alongside Martin, “Building a Bridge” shares the stories of LGBTQ Catholics, their families and their parish ministries as they intersect with the priest and with the church.

It also features Michael Voris, founder of Church Militant. Mascagni said he wanted to show the impact Voris and his followers have had as they’ve opposed Martin’s ministry.

Voris told Religion News Service he thought the documentary was a “fair representation” of himself and Church Militant. 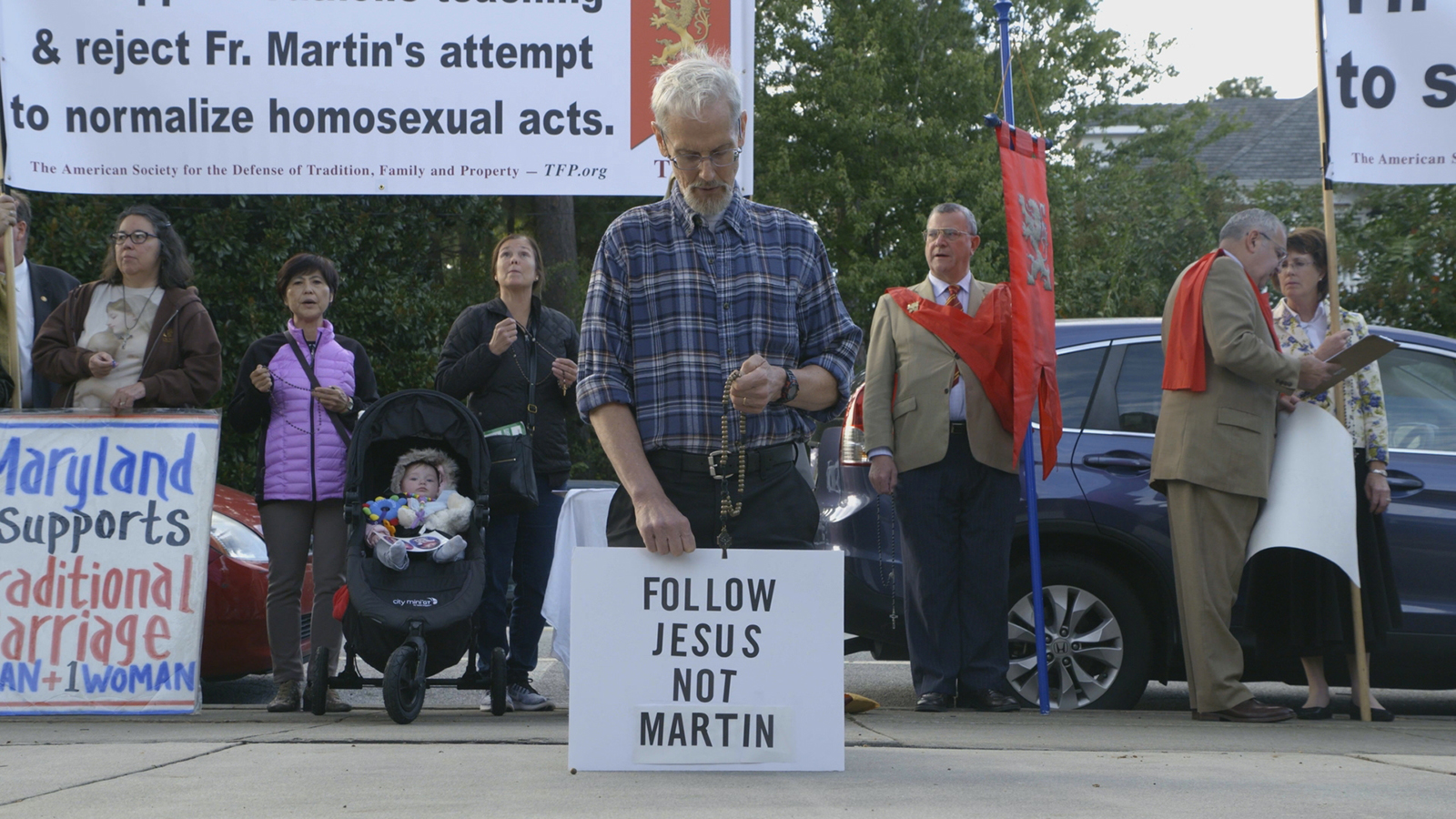 But, he said, “What sticks in my craw about it is that the church’s teaching doesn’t catch any real airtime.”

The Catechism of the Catholic Church refers to “homosexual tendencies” as “objectively disordered.” It also calls for LGBTQ people to be “accepted with respect, compassion, and sensitivity.”

The latter is the message Martin emphasizes, and the one the priest said he hopes audiences will take from “Building a Bridge.”

“I just hope that it helps LGBTQ Catholics see that there’s a place for them in their own church — it’s their church, too — and also for Catholic leaders to hear these voices,” Martin said.

“This is where Jesus not only wants us to be, but is. I mean, they are a part of the body of Christ.”