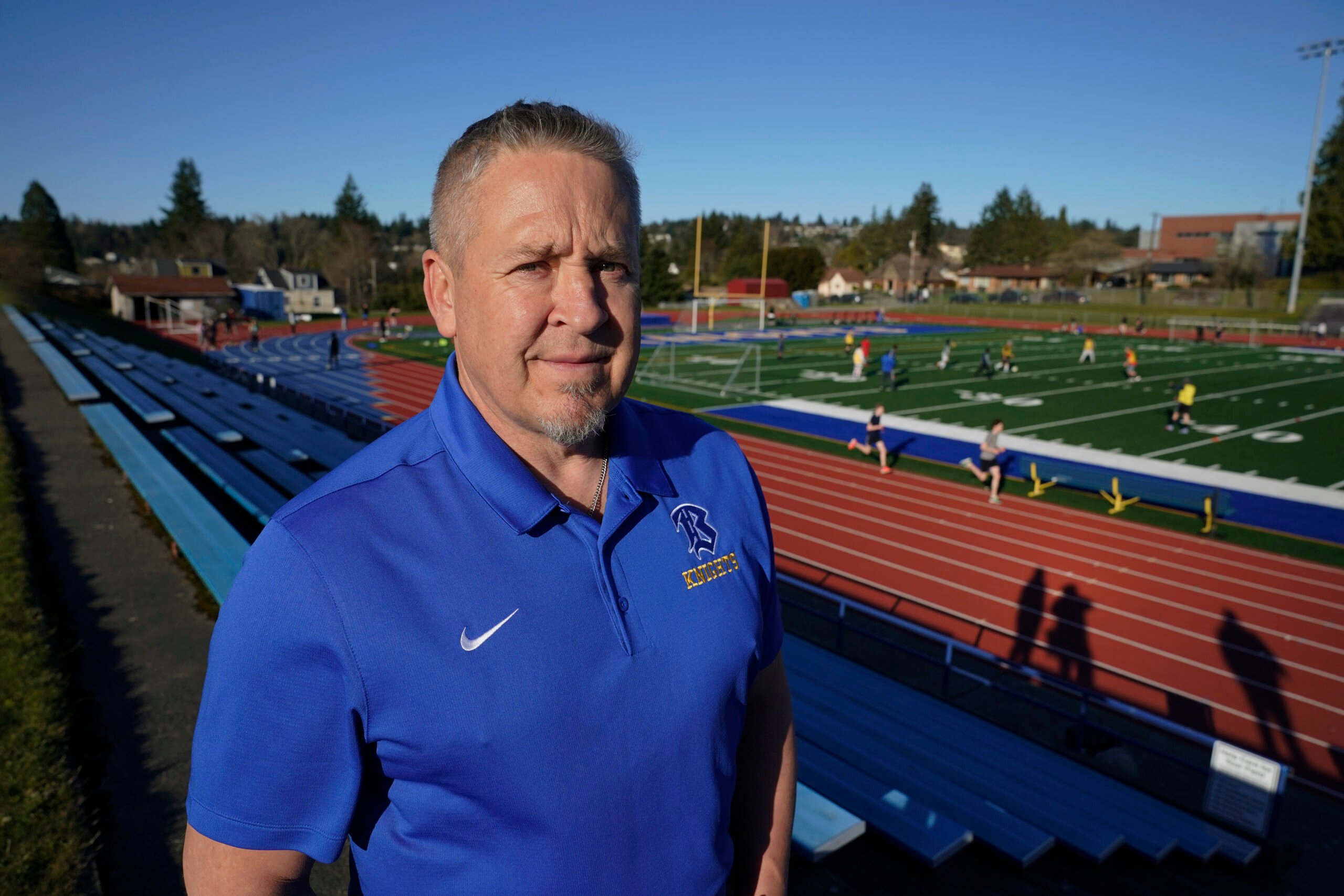 Joe Kennedy, a former assistant football coach at Bremerton High School in Bremerton, Washington, poses for a photo March 9, 2022, at the school’s football field. After losing his coaching job for refusing to stop kneeling in prayer with players and spectators on the field immediately after football games, Kennedy took his arguments before the U.S. Supreme Court on April 25, 2022, saying the Bremerton School District violated his First Amendment rights by refusing to let him continue praying at midfield after games. (AP Photo/Ted S. Warren)

Last Thursday (June 23), the Supreme Court struck down a New York law that had placed restrictions on carrying concealed weapons outside the home.

This Monday, the Supreme Court upheld the right of Joseph Kennedy, a football coach at Washington High School in Bremerton, Washington, to kneel and pray on the field after a game.

As reported by The Associated Press:

The Supreme Court said Monday that a high school football coach who knelt and prayed on the field after games was protected by the Constitution. The court ruled 6-3 for the coach with the conservative justices in the majority and the liberals in dissent.

It is not only that Kennedy engaged in this act of personal piety. It had been wider than that small gesture.

He started coaching at the school in 2008 and initially prayed alone on the 50-yard line at the end of games. Students started joining him, and over time he began to deliver a short, inspirational talk with religious references. Kennedy did that for years and also led students in locker room prayers. The school district learned what he was doing in 2015 and asked him to stop out of concerns the district could be sued for violating students’ religious freedom rights.

He stopped leading students in prayer in the locker room and on the field but wanted to continue kneeling and praying on the field himself after games. The school asked him not to do so while still “on duty” as a coach after the games. When he continued, the school put him on paid leave. The head coach of the varsity team later recommended he not be rehired because, among other things, he failed to follow district policy.

Here is what is happening, before our eyes. The Supreme Court is now in the process of institutionalizing and thus normalizing sectarian prayer in places that should be, to mischievously quote the late Richard John Neuhaus, “the naked public square.”

Why do I say “mischievously”? Because the late Father Neuhaus, whom I greatly respected, and who bemoaned the rise of American secularism, is probably doing gleeful somersaults in heaven, celebrating this Supreme Court decision.

In their dissent, the liberal judges affirmed such prayer moments are coercive, even subtly so.

I agree with their dissent. I fear the social repercussions on the Jewish child, the Muslim child, the Hindu child, the Jain child, etc., who objects to being pushed into what will certainly be a prayer that has a specific Christian coloring to it. Bremerton assistant football coach Joe Kennedy, obscured at center in blue, is surrounded by Centralia High School football players as they kneel and pray with him on the field after their game against Bremerton on Oct. 16, 2015, in Bremerton, Washington. (Meegan M. Reid/Kitsap Sun via AP, File)

Or, let me put it this way, Coach Kennedy is using the mantle of his religious privilege — that of being the majority faith in this country.

Imagine a Jewish football coach coming in and saying to the students: “OK, gather ’round here, everyone. We gonna say the Sh’ma — in Hebrew. Repeat after me …”

If you are having trouble imagining that, then imagine a Muslim coach: “Let us all bow toward Mecca and say, ‘There is one God and Muhammad is his prophet.'”

This is potentially dangerous stuff. When you mix religious privilege with a bunch of adolescents playing sports, and throw in kids who do not conform, especially in a locker room — someone is going to get hurt.

It goes beyond that. It is not only that the Supreme Court is normalizing public prayer, of the variety that excludes those of us who are part of religious minorities.

It is also that the Supreme Court is simultaneously setting the default switch of American public religion to Christianity, and a particular kind of Christianity — an assertive evangelical Protestantism, and an equally assertive Catholicism — with an accompanying vision of an America that has returned to the 1950s: white, Christian, nondiverse and heterosexual.

Indeed, those three terms — “White,” “Christian,” and “American” — have been used interchangeably so often that in many contexts, including in the lexicon of non-White, non-Christian immigrant communities, they remain synonyms for one another.

There is no room for the Jewish people in this picture. We Jews have been here before. We have seen augmented nationalistic movements with aggressively Christian soundtracks. That was called the European Jewish experience.

It also led to the creation of Zionism. Jews became tired of living in a majority culture that endangered them, and/or forced them to explain or erase themselves.

I daresay the actions of the Supreme Court, and those that might predictably follow, will cause more Jews to question their place in America.

But, my point, and my plea, is even larger and wider than this.

To quote Thomas Paine: “These are the times that try men’s (and women’s) souls.” We need a unity of souls, a growing coalition of liberal religious voices.

It is time for all of us to join the resistance.