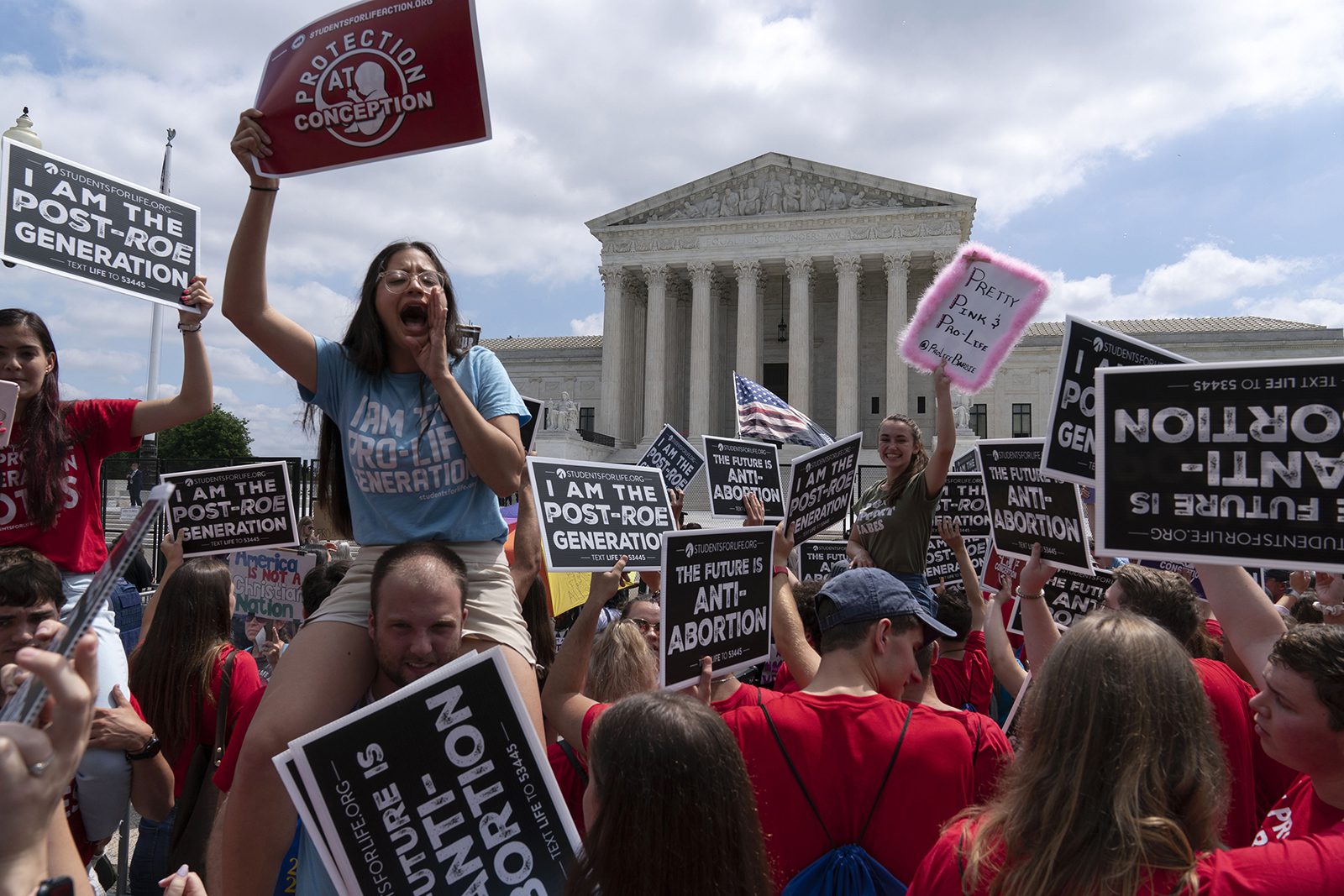 Anti-abortion protesters celebrate outside the Supreme Court in Washington, Friday, June 24, 2022. The Supreme Court has ended constitutional protections for abortion that had been in place nearly 50 years, a decision by its conservative majority to overturn the court’s landmark abortion cases. (AP Photo/Jose Luis Magana)

(RNS) — With the fall of Roe v. Wade, it seems at first glance like everything has changed. But with many aspects of our faith-based abortion politics, already some of the same old dynamics are showing themselves to be as stubborn and stable as ever.

The euphoria of a massive victory generations in the making has given way to two certain realities: First, abortion will still be legal in much of the country. And second, legislating morality is difficult: Many women will still obtain illegal abortions, daring the state — and the pro-life movement itself — to deride them as criminals worthy of surveillance, pursuit, prosecution and punishment.

The pro-life movement, so often disappointed in politicians who take their endorsements and endless campaign cash, watches helplessly as major Republican standard-bearers drag their feet.

And despite their victory at the U.S. Supreme Court in the overturning of Roe v. Wade, right-wing Catholics hammer Catholic Democrats who agree with the church’s social teachings on nearly every issue — except those directly related to human sexuality.

The only apparent difference is that pro-life Catholics’ political power could be more vulnerable than ever.

The basic problem is this: The conservative Catholic achievement, shared with evangelical Christian conservatives, is thoroughly anti-majoritarian and was attained only through a succession of dramatically unusual and arguably unethical and unconstitutional steps. In their glee, they seemed not to have stopped to realize that this highly unpopular outcome would have never happened at all if it depended on the votes of majorities.

A president who lost the popular vote conspired with a Republican Senate “majority” elected by a minority of voters to use unprecedented tactics and rationales to pocket two Supreme Court seats.

Now, having seen its will thwarted, the majority of Americans are already fastening on the pro-life movement’s most extreme proclivities. After a 10-year-old Ohio girl was raped and prominent anti-abortion voices at first implied the story was made up, they then resorted to saying that elementary school children like the Ohio victim should be forced by the state to deliver their rapists’ babies.

Georgetown historian Michael Kazin has compared the anti-abortion religionists’ position to that of the evangelicals who pushed Prohibition on the country: Their success might, Kazin implied, be their undoing, and eventually, as anecdotes like the above show, “make the anti-abortion movement seem more sadistic than virtuous.”

The early warning signs are not good. There seems to be a firm consensus that pro-life politicians, who hate the welfare state at least as much as they hate abortion, will not expand the social safety net to match the proliferation of unintended births. The movement’s chief policy solutions, for which it endlessly self-congratulates, are crisis pregnancy centers where all expectant moms, presumably including tween rape victims, can get free diapers and comforting Bible verses.

Though perhaps rare, stories like the one out of Ohio will become a constant drumbeat of national news. Don’t be surprised, then, when Republican governors decline to take the lead in forcing unspeakably traumatized children to give birth. 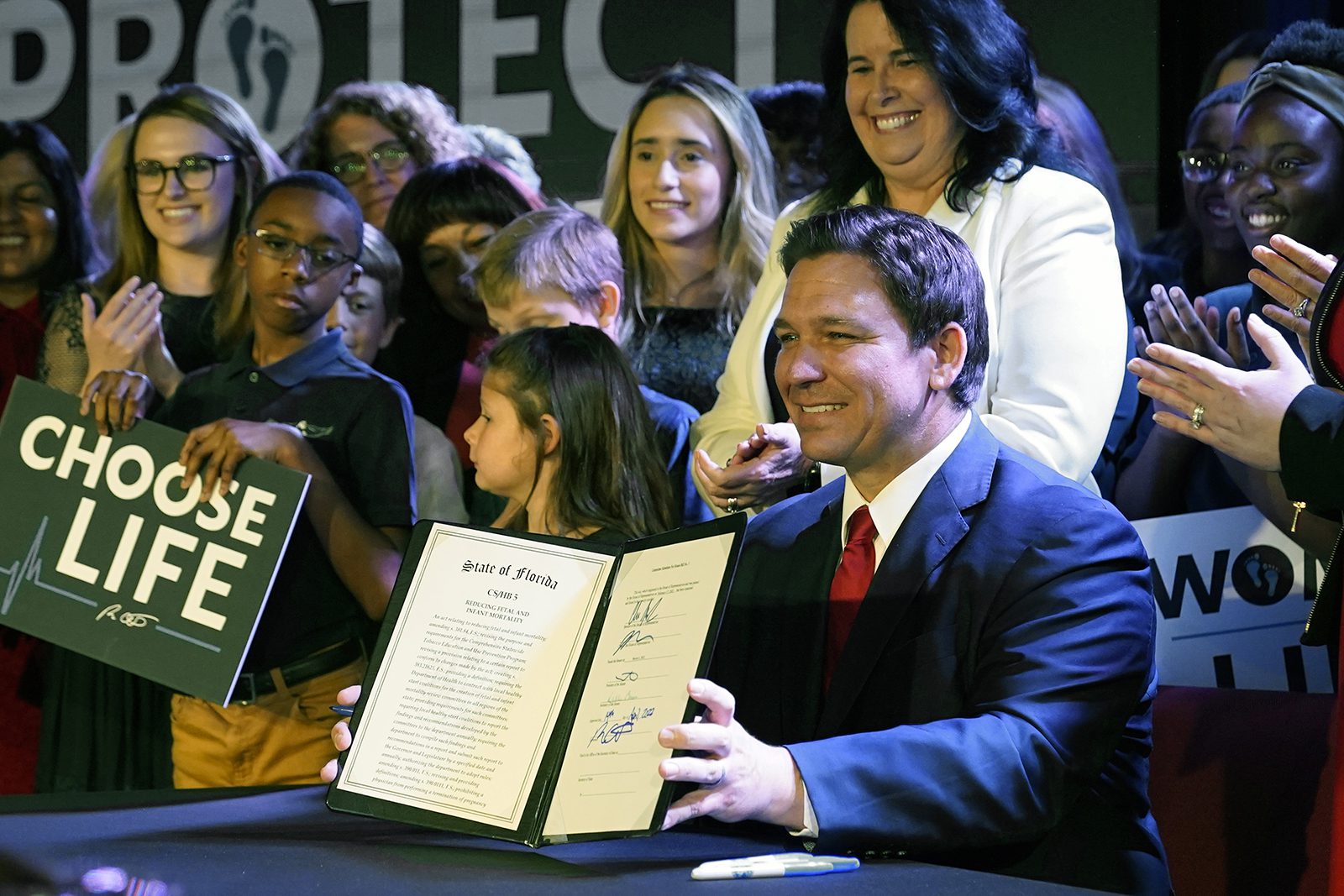 Last week, The New York Times ran an article under the headline “A culture warrior goes quiet,” explaining how Florida Governor Ron DeSantis has offered no specifics about abortion policy in the weeks since the Supreme Court released its decision in Dobbs v. Jackson Women’s Health Organization.

Two leading pro-life advocates in the state expressed mild dismay to the Times, and two national religious-right leaders, Penny Nance of Concerned Women for America and Ralph Reed of the Faith & Freedom Coalition, gave DeSantis a pass to do what is best for himself politically.

What’s best for DeSantis may well mean doing nothing.

In April, DeSantis signed a 15-week ban and, after Roe officially fell, offered a message of congratulations. But while he is never shy about denigrating “the Left” or people concerned about racial injustice, DeSantis apparently has no appetite to push for state or federal laws that would criminalize all or even most abortions, which, according to the CDC, preponderantly occur before 13 weeks.

DeSantis, a nominal Catholic, could earn the worshipful adoration of the pro-life movement if, after he is reelected in November by a comfortable margin, he calls the comically gerrymandered Republican legislature into special session to pass a six-week-heartbeat ban or criminalize abortion outright.

And while that may make him an even stronger candidate for the GOP presidential nomination, it carries general-election risks in a country where 61% of Americans think abortion should be legal in all or most cases.

This is why you haven’t heard either DeSantis or former President Donald Trump say they want to ban abortion nationwide. They need to get elected in order to help the pro-life movement achieve its unpopular aims through anti-democratic means.

So far, Republicans have shown they can win the Electoral College vote with as little as 45% of the popular vote and in turn nominate unelected and unaccountable Supreme Court justices to engineer unpopular policy outcomes that no Congress would pass. But without the safety net of Roe v. Wade in place to stifle the pro-life agenda, taking a hard-line anti-abortion stance has likely become an act of political suicide.

Republican candidates such as DeSantis will continue to outdo each other in all manner of culture-war-base stoking — see the Florida governor’s war against Disney and public schools on LGBTQ issues. But neither DeSantis nor his chief rival for the Republican nomination, Donald Trump, is likely to campaign on forcing rape victims to carry their pregnancies to term. Even these two find the vindictiveness and authoritarianism of pro-life extremism a bridge too far.

RELATED: As states ban abortion, a new spotlight on an old battle over sex education

With their victory on Roe, however, when DeSantis announces for president, the governor of a Republican state where abortion is still mostly legal will be hailed as a pro-life hero. But even anti-abortion movement leaders aren’t likely to want him to take a hard-line stance — they also know there is no majority-rule path to a national ban on abortion.

Once the rank-and-file gets over the flush of victory in Dobbs, therefore, the pro-life movement and the Republican Party dance will continue in a slightly different form. The movement will agree it needs more money, more Republicans, more right-wing judges and another champion whose road to the White House depends on delivering just enough to keep the forever war against abortion going, but not enough that the whole thing falls apart.

(Jacob Lupfer is a writer in Jacksonville, Florida. The opinions expressed in this commentary do not necessarily reflect those of Religion News Service.)