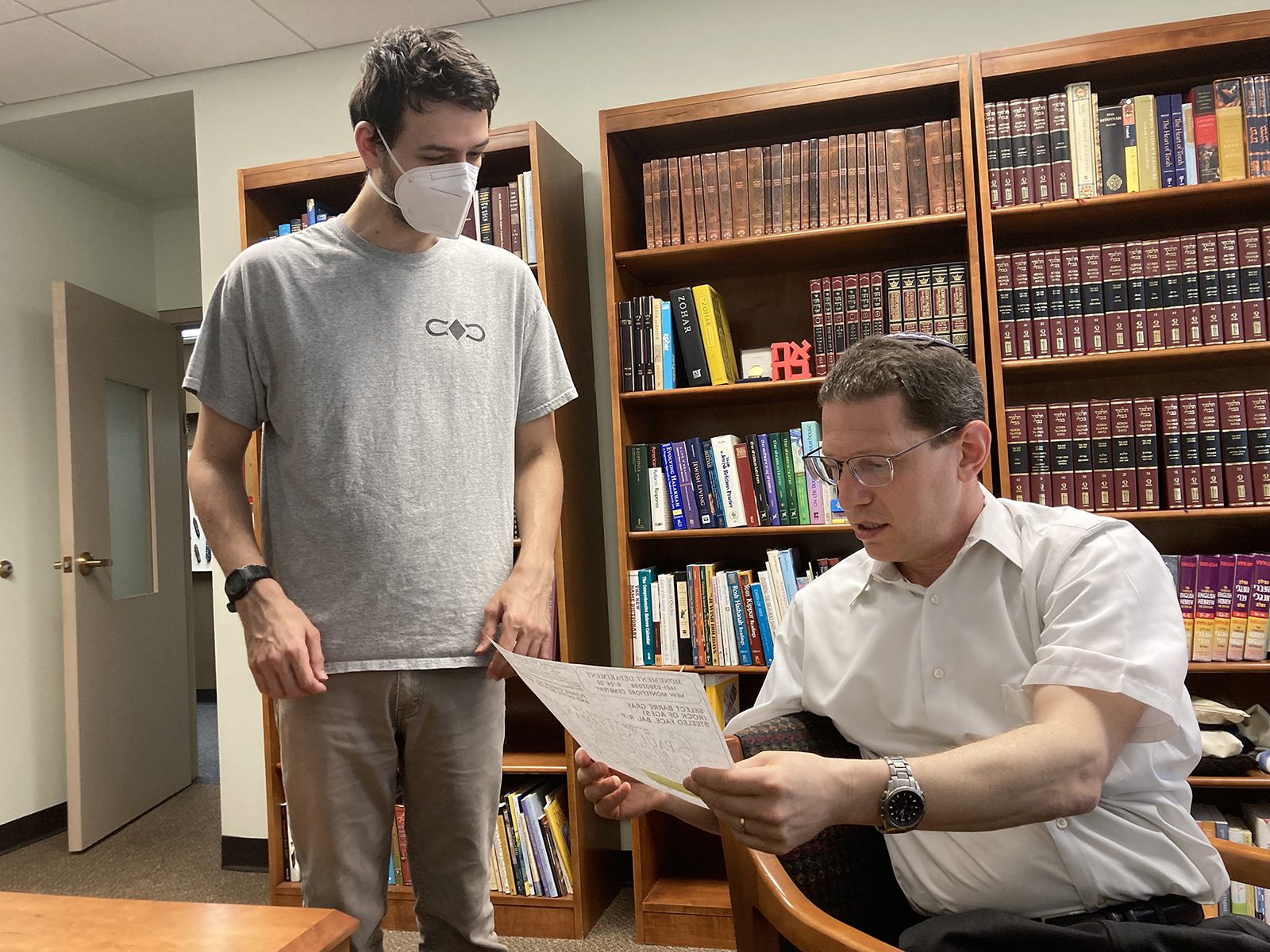 WINSTON-SALEM, N.C. (RNS) — At Rabbi Charlie Cytron-Walker’s third Shabbat service in his new congregation, gun safety was uppermost in his mind, as it has been for months now.

In his 10-minute sermon on a recent Friday evening at Temple Emanuel, the 46-year-old rabbi spoke of his trip earlier that week to the White House, where he and his wife helped celebrate the signing of a bipartisan gun safety law.

It was nearly six months to the day since Cytron-Walker’s life had changed dramatically, when he and several congregants at his previous synagogue, in Colleyville, Texas, were held hostage by a gunman who demanded the release of a person in prison. After 11 hours, Cytron-Walker distracted the invader, allowing the rabbi and his fellow hostages to escape.

Since that January day, Cytron-Walker has been interviewed on TV countless times, testified before Congress and most recently was awarded an exceptional service award from his seminary, Hebrew Union College-Jewish Institute of Religion. Among American Jews, he is a household name.

But on this Shabbat eve, the rabbi talked about his White House visit, describing how he met the son of Ruth Whitfield, an 86-year-old woman killed in a May 14 racist shooting on Black shoppers in a Buffalo, New York, grocery store.

“I was so glad to meet him and so sad that we live in a world where an elderly woman can be killed by a gunman when she’s shopping for groceries,” he told worshippers at Temple Emanuel. 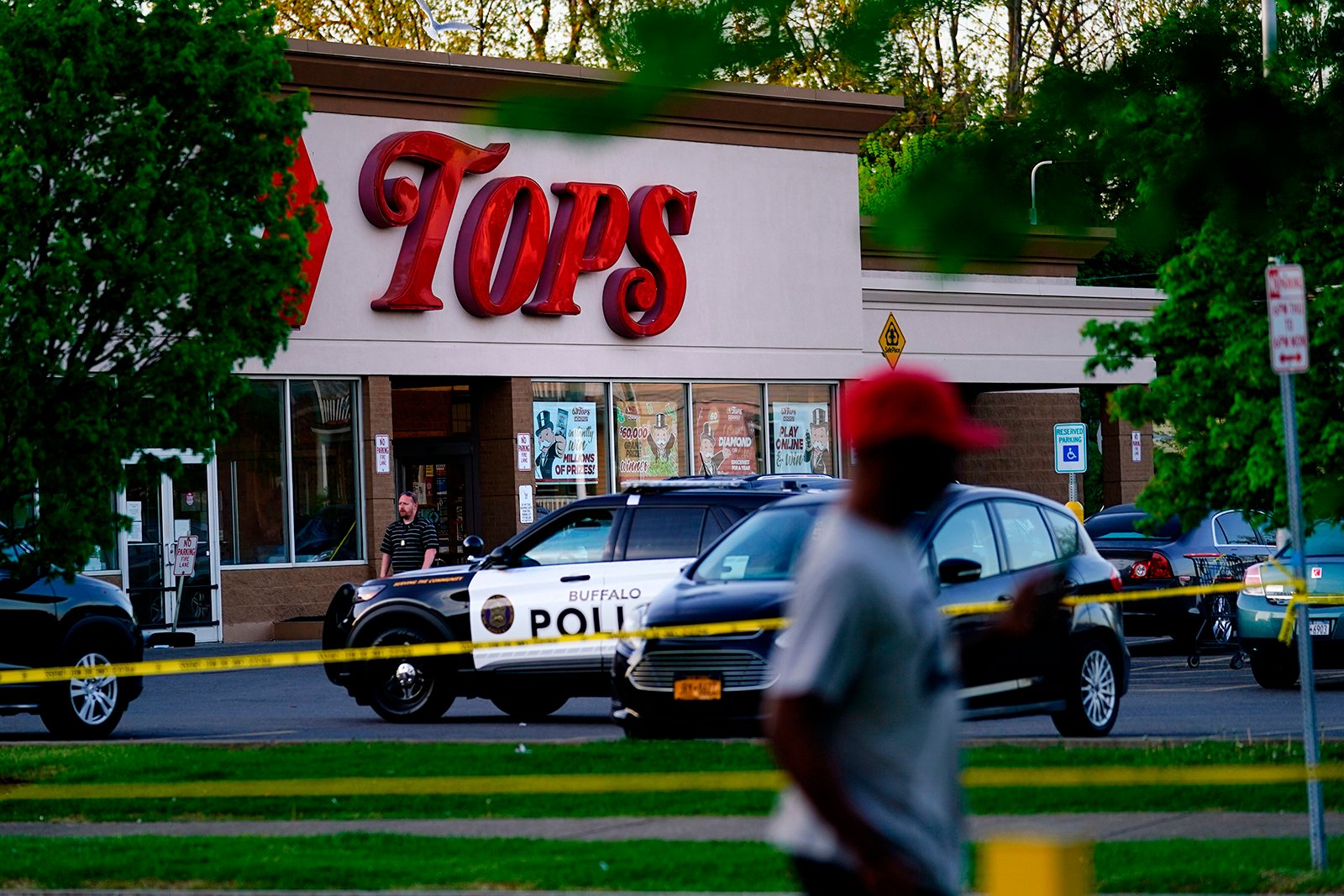 A person walks past the scene of a shooting at a supermarket, in Buffalo, New York, May 15, 2022. (AP Photo/Matt Rourke)

Cytron-Walker also wanted to let the members of his new synagogue know that safety is a top priority. He wants members to undergo active shooter training and beef up other safety protocols.

At the same time, he does not want fear to hold them back.

It’s a natural but difficult subject to lead with for Cytron-Walker, a man of hope whose first and deepest impulse is to build community.

His goal for his first year at Temple Emanuel is to get to know every member “by name and face.” That’s 280 families, or about 600 men, women and children — double the number at Congregation Beth Israel in Colleyville, where he served for 16 years. 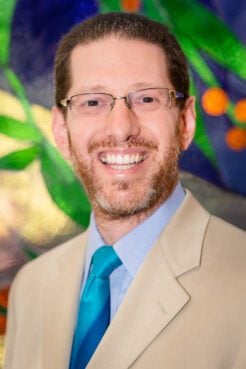 He has a warm demeanor a desire to connect. For Shabbat services, he wore a Peanuts comic strip tie. He is also fond of quoting the Muppets, particularly Gonzo’s song: “There’s not a word yet for old friends who’ve just met.”

After services on Friday he lingered at a wine and cheese reception called an oneg, chatting up synagogue members and flashing a toothy smile.

“We felt he was genuine, sincere and really had a desire to build relationships with people and get to know their stories,” said Hilary Kosloske, the immediate past president of the congregation, explaining why the congregation picked him.

A native of Lansing, Michigan, Cytron-Walker feels comfortable in small-town America. Winston-Salem is North Carolina’s fifth largest city, with a population of 245,787.

While many rabbis have ambitions to serve prominent sanctuaries on either coast where Jews are concentrated in larger numbers, Cytron-Walker has no such calling.

He said he would feel guilty serving a congregation of thousands and not knowing half the people personally. “It’s not about where you live,” he said. “It’s about how you live and how you make and create community.”

It’s the same impulse that drew him to Colleyville — population 26,766 — in 2006. The town, about 30 miles northwest of Dallas, had just formed its first synagogue, Congregation Beth Israel, and Cytron-Walker, fresh out of seminary, was chosen as its first rabbi.

He arrived with his wife, Adena, and newborn daughter. They settled in, welcomed a second daughter, and got to work forming strong Jewish and interfaith friendships. Adena eventually became vice president of programs at the Multicultural Alliance, a Fort Worth organization that works toward “understanding and respect among all races, religions, and cultures through advocacy, conflict resolution, and education.”

Rabbi Charlie, as he is known, built up the Reform synagogue to a congregation of about 125 families. He became much beloved not only by his budding congregation but in Christian and Muslim circles around Dallas-Fort Worth. 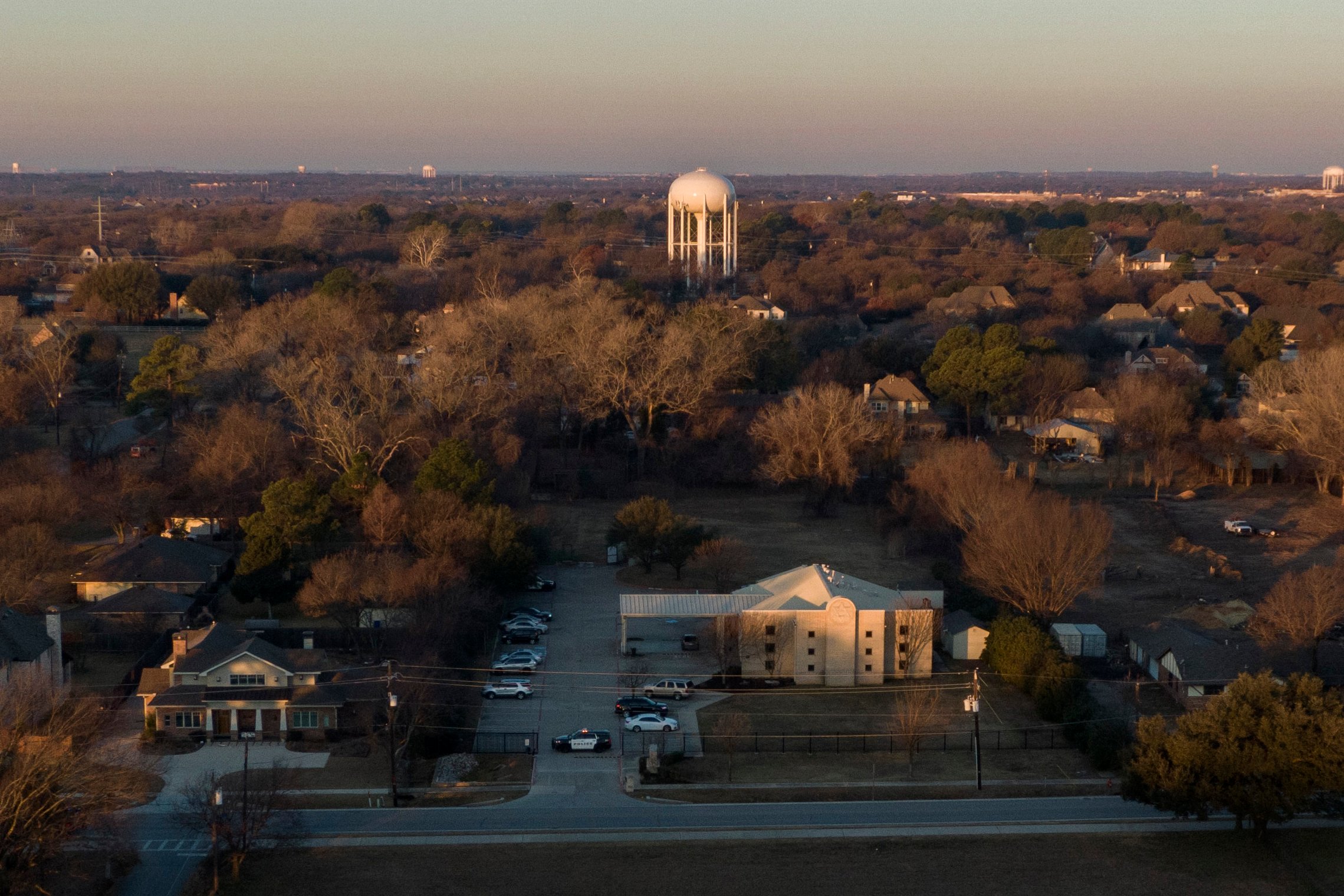 When a 44-year-old British man came to the door one cold January Shabbat morning, Cytron-Walker made good on his deep-seated practice of hospitality. He let the man in and offered him a cup of tea.

Cytron-Walker was facing the ark, which holds the Torah scrolls, when he heard the click of a gun. The visitor, Malik Faisal Akram, made his real aim clear. He demanded the release of Aafia Siddiqui, a Pakistani neuroscientist who was incarcerated at a Fort Worth federal prison for trying to kill American military officers while she was in custody in Afghanistan.

Cytron-Walker negotiated with the gunman for about 11 hours as the FBI and other law enforcement agencies amassed outside the synagogue. Seeing that the gunman was becoming belligerent and agitated, Cytron-Walker looked for an opportunity to flee. Over the course of several hours, he and his congregants moved closer to an exit. When the gunman appeared momentarily distracted, Cytron-Walker threw a chair at him and ran for the door. The FBI then shot and killed Akram.

The rabbi later credited multiple security courses from the Colleyville Police Department, the FBI, the Anti-Defamation League and Secure Community Network for guiding him in what to do.

By the time of the attack, Cytron-Walker had already learned that the synagogue’s board of directors had planned to recommend against renewing his contract. He felt his time was up. He announced he would leave. Charlie Cytron-Walker, rabbi of Congregation Beth Israel, center, makes a statement to the media after a service at White’s Chapel United Methodist Church in Southlake, Texas, Jan. 17, 2022. The church held a healing service for congregants and members of the community after a Jan. 15 standoff at the synagogue. (Rebecca Slezak/The Dallas Morning News via AP)

In late 2021, he had already interviewed with Temple Emanuel twice over Zoom. He and his wife were supposed to arrive for an in-person visit in Winston-Salem two days after that fateful Shabbat morning.

“We were exceedingly high on Rabbi Charlie before the incident,” said William Reingold, a retired district court judge who chaired Temple Emanuel’s rabbi search committee and is now the congregation’s president. “But he acted very heroically and showed true grace under fire during that hostage situation. It certainly enhanced his stature in our eyes.”

In March, Temple Emanuel offered him the job.

His first day was July 1. The Cytron-Walkers are mostly moved into their new home in Winston-Salem, though the walls are still bare. His girls, ages 14 and 16, will start public schools next month. 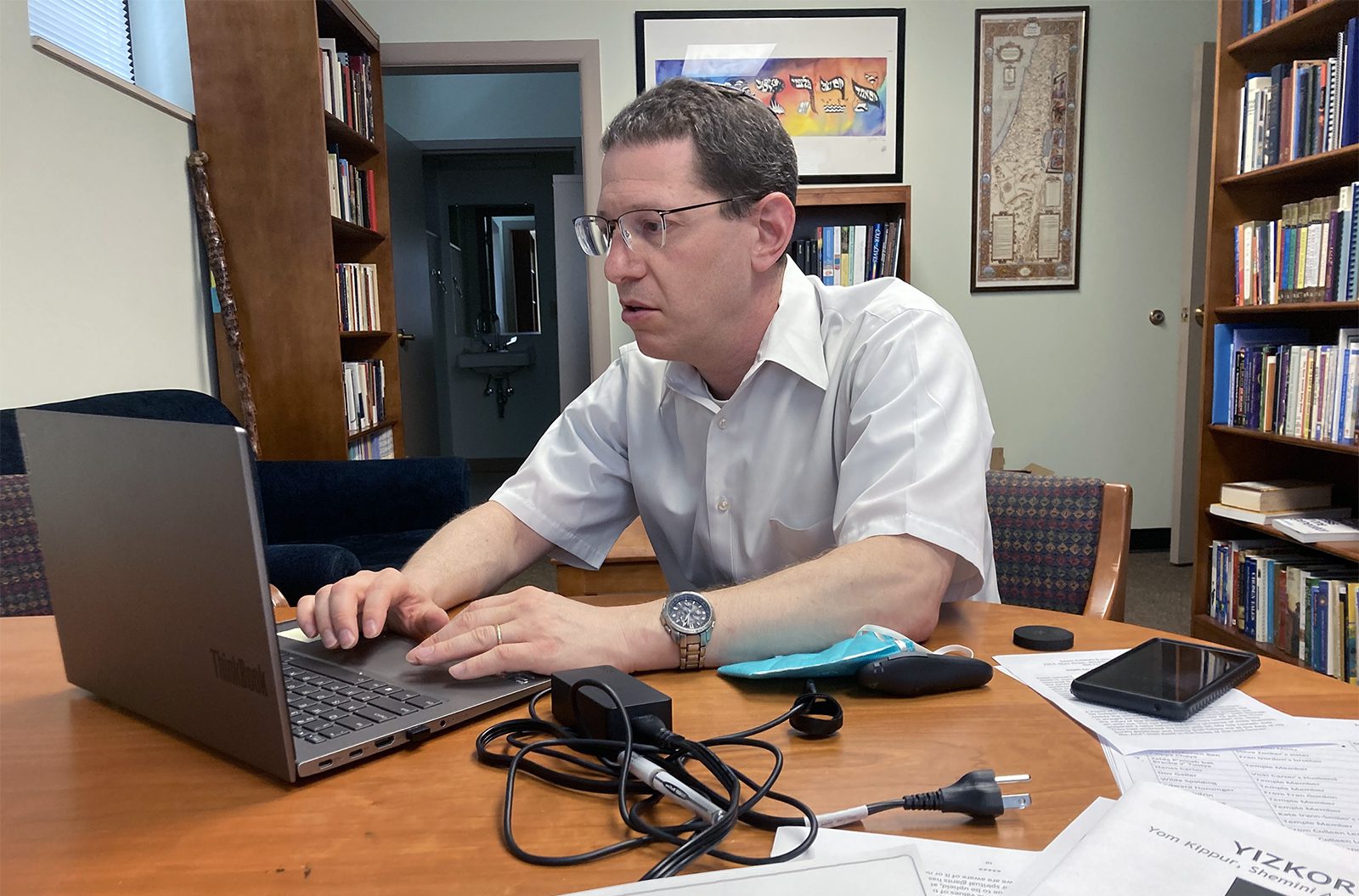 Cytron-Walker had already made the rounds at a hospital and led a shiva mourning service for a member who had died. This past weekend, he helped raise money for a local nonprofit that provides food, clothing and medical care to the poor.

The transition has been mostly uneventful. Temple Emanuel has seen modest but steady growth — even under pandemic restrictions. The sanctuary is modern but formal with pews and stained glass windows, a grand piano and a giant screen where prayers and songs are projected.

The temple is Winston-Salem’s only Jewish congregation, though the campus of nearby Wake Forest University has a Hillel chapter and there’s also a Chabad rabbi on campus.

Cytron-Walker has already met the pastor of the Presbyterian church down the street. In September he’ll give a talk to Interfaith Winston-Salem, a nonprofit volunteer educational group.

For now, hospitality and security are his watchwords.

“Yes,” he told his congregation, “there are a lot of challenges in our world. We can take steps to prepare ourselves for bad situations. And yes, we should live our lives with love and joy and find positivity in all the small things. All of that is true.” 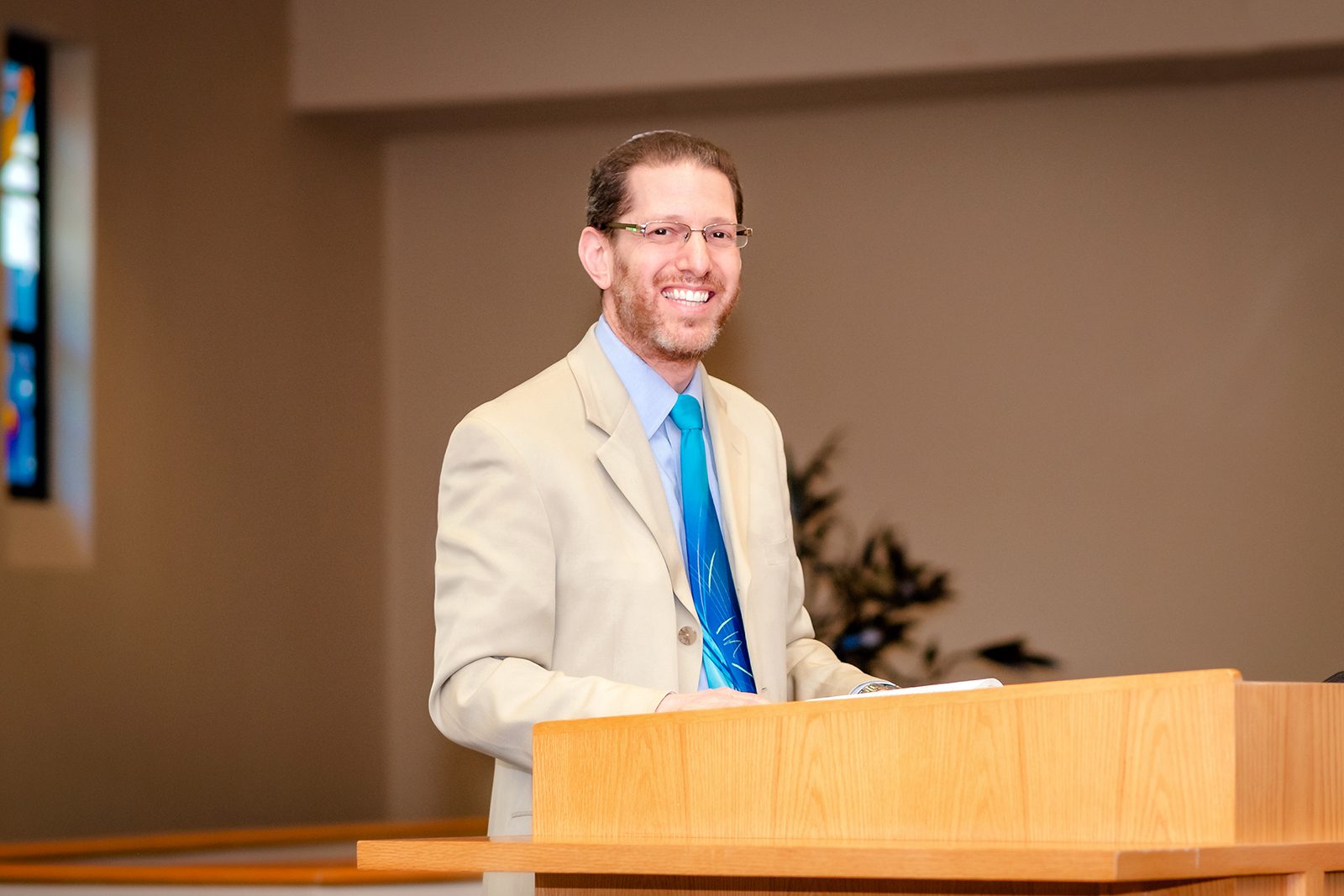 RELATED: God did not give Americans guns. To say otherwise is heresy. 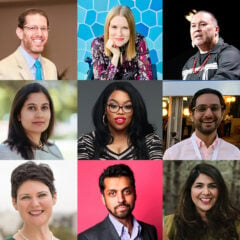 Religion Hub
Emhoff to host Jewish leaders for discussion of antisemitism
Follow us on Facebook!
Submit your photos to RNS