(RNS) — Faith leaders from a wide range of traditions, including those whose houses of worship have been attacked, were at the White House Monday (July 11) as members of Congress and other gun control advocates gathered for a White House celebration of the Bipartisan Safer Communities Act, signed into law June 25.

Pastor Mike McBride, the leader of Live Free USA, who has long sought political support to especially help the nation’s urban centers, hailed the signing as an opportunity to address gun violence deaths that do not always make national headlines.

“It’s been a very difficult task to get the death of Black men in this country, much less the death of any Black folks, to receive national attention and intervention,” said McBride. “Even among Democrats — Democrats have not been the most political champions for this work. So it’s taken us 10 years to get to $250 million committed in a bipartisan way.”

On hand were Rabbi Jonathan Perlman and others who endured a mass shooting in 2018 at the Tree of Life Synagogue in Pittsburgh and the Rev. Sharon Risher, whose mother was among the nine African American worshippers killed during the 2015 shooting at Mother Emanuel AME church in Charleston, South Carolina.

“That was beautiful — to see all these heroic people, survivors that have been working for change,” said Shane Claiborne, co-founder of the group Red Letter Christians and leader of an effort that melts down guns into garden tools in observance of the biblical call to turn “swords into plowshares.” 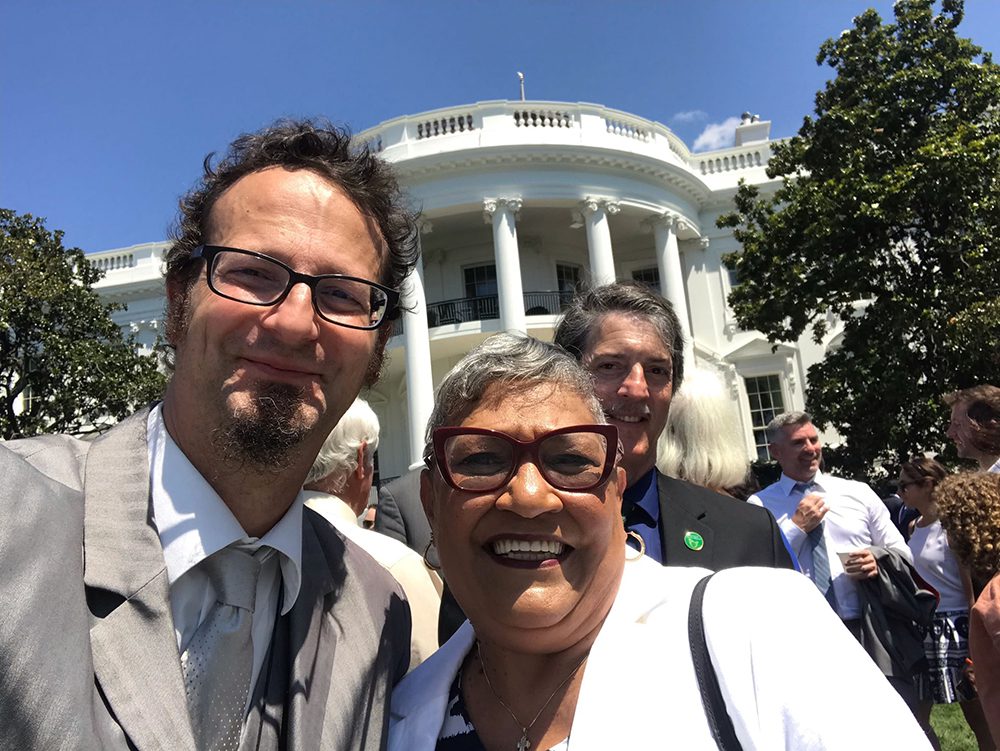 But Claiborne added that he understood that the bipartisan legislation “is the most substantial gun reform bill that we’ve seen in 30 years. But what we also heard is how dysfunctional our political process is — because there’s so much more that’s needed.”

“We need a ban on assault rifles,” he added.

The legislation includes a variety of interventions into gun purchasing, including expansion of background checks for people younger than 21, $250 million for community-based violence prevention initiatives and $500 million to increase the number of mental health staffers in school districts.

President Joe Biden, in remarks from the White House’s South Lawn, decried the violence that has turned houses of worship, schools, nightclubs and stores into places of death.

“Neighborhoods and streets have been turned into killing fields as well,” said the president. “Will we match thoughts and prayers with action? I say yes. And that’s what we’re doing here today.”

Claiborne said he presented a Christian cross made from a melted-down gun barrel to second gentleman Douglas Emhoff, as well as to a friend of President Biden. McBride said his efforts with faith leaders on this issue date back to a 2013 meeting at the Obama White House, when Biden was vice president.

He said the programs for which groups like the Fund Peace Foundation seek support are “targeted for Black and brown communities that are dealing with the highest rates of gun violence,” including from gangs and intimate partners.

Other faith groups have responded to the passage of the legislation with statements of support.

“The investments in mental health services and reasonable measures to regulate guns included in this bill are positive initial steps towards confronting a culture of violence,” said Archbishop Paul S. Coakley of Oklahoma City, chairman of the U.S. Conference of Catholic Bishops’ Committee on Domestic Justice and Human Development.

“We are heartened that after almost three decades of gridlock, Congress has finally taken bipartisan action to address America’s gun violence epidemic and end violent crime,” said Melanie Roth Gorelick, senior vice president of the Jewish Council for Public Affairs. “This is a huge victory, but we cannot allow this to be the end.” Black faith leaders working to end gun violence pose with Natalie Montelongo, center, of the Office of Political Strategy and Outreach after a bill signing ceremony at the White House, Monday, July 11, 2022. Photo by Bill Lee

While calling himself grateful for this historic development, McBride said he and his partners will be pushing for far more support.

“This will be a failure if this is the only thing they do for the next few years,” he said.

Biden seemed to agree that further action was needed.

“We have so much more work to do,” he concluded. “May God bless all of us with the strength to finish the work left undone, and on behalf of the lives we’ve lost and the lives we can save, may God bless you all.”