(RNS) — When the Rev. Deanna Hollas heard about the school shooting in Uvalde, Texas, she was shocked, but she wasn’t surprised.

That’s what happens in a world where there are more guns than there are people, she said.

Every single day, Hollas said — pointing to data from the Centers for Disease Control and Prevention — incidents involving guns take more than 120 lives.

“The mass shootings capture our attention because it could be us. The randomness feels so much worse as opposed to the one child that gets ahold of a gun or the one that gets shot by a drive-by shooting. Those, oftentimes, we’ve become numb to, and we’ve just expected them to be normal, but it’s not. It’s not normal,” she said.

“It’s only because we have so many guns.”

Hollas, a Texas native, became interested in gun violence prevention in 2016 when the state passed a law allowing guns on college campuses. Worried about her daughter, then a student at Texas Tech University, she joined the group Moms Demand Action as “really just a cry for help: ‘What do I do? How can I make a difference?’” She was ordained specifically to the call of gun violence prevention in 2019 by Grace Presbytery, which includes Presbyterian Church (USA) congregations in North, Northeast and Central Texas. During the service, she was presented with an orange stole — not a traditional liturgical color, but a color used nationally to symbolize gun violence prevention. The congregation debuted a new hymn: “If We Just Talk of Thoughts and Prayers” by the Rev. Carolyn Winfrey-Gillette.

The Rev. Steve Shive, interim general presbyter of Grace Presbytery, said the presbytery has always been 100% supportive of Hollas’ call because “we have all seen the effects of gun violence in our culture and our society.”

For decades, the Presbyterian Church (USA) has urged its members to study, dialogue and act to prevent gun violence, Shive noted. That goes back to the assassination of the Rev. Martin Luther King Jr. in 1968, according to the Presbyterian Peace Fellowship.

Other mainline denominations have also joined, like the Episcopal Church’s Bishops United Against Gun Violence.

Since her ordination, Hollas has served as the coordinator of gun violence prevention ministries for Presbyterian Peace Fellowship, a nationwide network of mainline Presbyterians focused on ending violence and war.

Gun violence has only grown worse in that time. Shane Claiborne, from left, Mike Martin and the Rev. Deanna Hollas at a Guns to Gardens event at Houston Mennonite Church in September 2021 in Houston. The event was scheduled for when the National Rifle Association intended to host an annual meeting in Houston. Photo courtesy Deanna Hollas

The day before the school shooting in Uvalde, the FBI released a report noting an alarming increase in active shooter incidents — a number that has doubled since 2017, climbing from 30 incidents in 2019 to 40 incidents in 2020 and 61 in 2021.

A month prior, the CDC released data showing guns were the No. 1 killer of children and adolescents, claiming the lives of 4,368 Americans under the age of 19 in 2020.

That’s a Uvalde every other day in the U.S., Hollas said.

The minister sees efforts to end gun violence as fulfilling the promises Presbyterians make when they are baptized: “to turn away from violence and toward love, toward life, toward Christ,” she said.

In the wake of the school shooting in Uvalde, Hollas asked Presbyterian Peace Fellowship members to ring their church bells 19 times in memory of the children who were killed.

She shared resources, including Scripture passages and hymns that speak to the issue of gun violence; prayers written by students after the 2018 shooting at Marjory Stoneman Douglas High School in Parkland, Florida; information about related proposals headed to the denomination’s general assembly in June; ways to speak out on social media and to contact elected officials. People gather May 26, 2022, at a memorial site to pay their respects for the victims killed in the elementary school shooting in Uvalde, Texas. (AP Photo/Jae C. Hong)

She also urged Presbyterian Church (USA) congregations to host Guns to Gardens events at their churches, inviting — and sometimes incentivizing — gun owners to turn over their weapons to be turned into garden tools. The events are meant to evoke the prophet Isaiah’s biblical vision of peace: “They will beat their swords into plowshares and their spears into pruning hooks.”

Community United Church of Christ in Boulder, Colorado, held the first Guns to Gardens event with a nonprofit network of blacksmiths called RAWtools after a gunman killed 10 people last year at a grocery store in the city, according to according to the church’s pastor, the Rev. Nicole M. Lamarche.

The church prayed and organized listening circles to determine how to act. It then invited people to bring unwanted guns to an event at the church, where those present watched as the weapons were sawed into pieces. Later, the church hosted a healing event for the community, where blacksmiths transformed those pieces into garden tools and jewelry.

“Having it be hosted by a faith community was something that had never happened before, and then the best thing happened, which is that it inspired a whole other thing beyond what we could have even imagined in terms of just congregations outside of our tradition doing this,” Lamarche said.

On June 11, Presbyterian Peace Fellowship is partnering with churches and organizations across the country to organize more than a dozen Guns to Gardens events. Additional events and trainings for interested churches are planned later this summer and fall, according to Hollas.

“We cannot turn away when there is such tragedy,” she said.

“We are the ones who comfort the families, who bury the dead, and we can’t just do that without asking, ‘What can we do to stop this?’ Because we know that this doesn’t happen in other countries, other peer nations. This is a unique problem to the United States, and it has to do with our gun laws.”

This story has been updated to correct the name of the pastor at Community United Church of Christ in Boulder, Colorado. 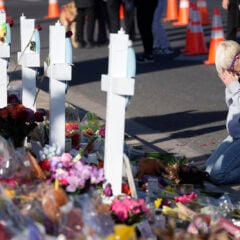