(RNS) — When she heard about the shooting at Robb Elementary School in Uvalde, Texas, it all came back to Taylor Schumann.

How she hid in a closet as a gunman walked into the satellite campus of New River Community College in Christiansburg, Virginia, where she was working at the front desk, just inside the entrance.

How the gunman, a student she didn’t know, fired through the door of the closet where she hid, ripping apart her left hand. Shrapnel lodged in her eye and chest.

How she couldn’t reach out to her family to let them know she’d survived and how helpless that made her feel — how helpless the students and teachers at Robb Elementary also must have felt as a gunman opened fire in their school, too.

Schumann felt the pain and the fear and the helplessness all over again when she heard about the 19 children and two adults shot to death Tuesday (May 24) in Uvalde, just as she relived that trauma when she heard about any one of the mass shootings across the United States that have grabbed headlines since she was shot in 2013.

“Experiencing a shooting, in whatever way someone might, never leaves you,” she said.

“Whenever I hear about a shooting, especially one that takes place at a school, I’m immediately brought back to the room where I was hiding. I recall the pain I felt, the fear that took hold of me, and I can’t help but feel it all over again for the people experiencing this recent shooting. It’s a visceral response.”

After several surgeries and a year of occupational therapy, Schumann now has partial use of her hand. 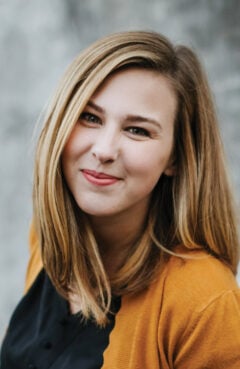 She worries about how to explain her scars to her son, now nearly old enough to go to school — or how to tell him that school shootings are no less likely now than they were nine years ago when she was injured.

Schumann’s book, “When Thoughts and Prayers Aren’t Enough: A Shooting Survivor’s Journey Into the Realities of Gun Violence,” published last year by InterVarsity Press, describes her experience and how it impacted both her Christian faith and her views on gun reform.

“God has been good to bring me healing and restoration in the years since I was shot, but it will never leave me,” she said. “And as hard as that is, I am thankful that the pain still feels that real. As long as this keeps happening in America, I hope to never become numb to it.”

In an email exchange with Religion News Service, the author shared why it’s so difficult to talk about gun reform — and so important, especially for her fellow Christians.

How did the shooting impact your faith?

My relationship with God changed a lot after the shooting, but not in the ways some people assume. I never stopped believing, and I never stopped praying, begging him for healing, asking him why. But until that point my life had been relatively quiet and easy. I had experienced hurt and hardship like anyone else, but the God I knew was still the God of mostly good times. I never had to become so intimately close to the God who bottles my tears and binds my wounds. After the shooting, I had to confront God with a lot of questions and doubts and fears.

And he met me in every single one. I learned that God is still God when the healing doesn’t come, when the nightmares don’t go away and the prayers are answered in ways you didn’t ask for.

What can be done to make sure something like this never happens again?

When we look at research about school shootings, we find that in most cases the shooter gets the gun from their own home or the home of someone they know. In about half these cases the gun wasn’t stored safely. Yet most states have no laws requiring safe storage. Every step you put between a gun and someone else reduces the risk of harm and death. This tells us that simple safe storage laws could mean a shooting never happens.

We also know that in a lot of cases the shooter shows warning signs. This is why we need red flag laws, or extreme risk protection orders, in every single state. We tell people to say something if they see something. Offering a way for people to contact law enforcement when they notice something can make a huge difference. Other measures, like closing loopholes and enacting waiting periods, could also reduce shootings.

Your book’s title says thoughts and prayers aren’t enough. What role do they play? 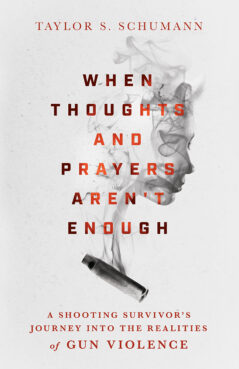 “When Thoughts and Prayers Aren’t Enough: A Shooting Survivor’s Journey Into the Realities of Gun Violence” by Taylor Schumann. Courtesy image

I believe in the power of prayer deeply, and that’s why it offends me so much when it’s used as simply a soundbite. I think when we pray about gun violence, we are not always open to hearing what God has to say. Are we really willing to be used to reduce gun violence? If God’s answer to our prayers requires personal sacrifice, are we willing to hear that? I’m not so sure we are.

Prayer should be where we start, not where we finish. If we were praying genuine prayers about gun violence we would see a lot more genuine action.

You wrote, “Most painful of all was the realization that those who turned away, who remained silent, were the ones I most expected to see on the front lines.” Why did you expect your fellow Christians to rally around this issue?

We are called as Christians to care for the oppressed and the hurting and to seek justice in ways that are true to the Word of God, even when it comes at personal sacrifice. For years I had watched, and been part of, the pro-life movement, and saw people call for laws to protect life. To me, gun violence should be no different.

Gun violence is taking so many lives every single year, with 40,000 deaths on average — 40,000 image bearers of Christ taken from this earth in acts of violence. It was and is hard for me to understand why this issue hasn’t been taken up as a banner pro-life issue for Christians.

I think the political fault lines stop many people from truly getting involved, and we need to deal with that. We need to recognize other ways to care for victims and their families: community care support, financial giving, violence prevention. There are a lot of ways to care about gun violence beyond politics — though politics has not held Christians back from getting involved in other issues, so that says a lot about what we are willing to stand up for and what we aren’t.

Why is this so hard to talk about? What are we talking about when we talk about gun reform?

Talking about gun reform is like talking about religion or abortion. You’re rarely just talking about the issue on the surface. You’re most likely talking to someone who has long-held opinions about guns that make up a portion of who they are. Likely those beliefs go back generations and are deeply ingrained in family traditions, and we’re asking them to reconsider or reevaluate part of who they are. That’s not easy.

It wasn’t easy for me either. When we are asked to reconsider something we have believed for a long time, it feels like we’re peeling up part of our own skin to look underneath. It can feel like if we do that, the whole thread of who we are might unravel. When we engage in these conversations without considering someone’s background, culture, traditions, we’re not engaging in good faith, because whether we like it or not, that stuff does matter.

So when we talk about gun reform, we need to talk about it in a way that invites all of us in, to bring with us our histories and our knowledge, and not discount someone else’s experience.

What would you say to Christians who have different views on gun reform?

I like to remind people that gun violence is too important an issue to cling to beliefs simply because we always have. It is scary to interrogate our beliefs and wonder if we might be wrong, if we might need to change our minds. It is never my intention to shame anyone into changing their minds, but instead to offer an alternative way to think about gun reform.

Americans see the right to bear weapons as an ultimate freedom. In reality, true freedom might just be a result of laying down our personal desires and “rights” for the good of our neighbors. If you take the time to listen to the research about guns and listen to stories from survivors and don’t change your mind, I have a lot of respect for you. If you’re unwilling to do that, I would ask why you’re so resistant.

What would you share with survivors of these most recent shootings?

For the survivors living in the aftermath of these recent shootings, I want you to know you’re not alone, and your suffering and experience will never be forgotten. There are thousands of us who have been through what you’re going through and hold you in our hearts every day. So in the dark of night, when you feel alone and forgotten, please remember that we will never forget.

RELATED: America sacramentalizes guns as God’s gift to the good. This is heresy. (COMMENTARY)

Signs of the Times
The Catholic bishops support gun control. Why don’t we hear more about it?
Follow us on Facebook!
Submit your photos to RNS