VATICAN CITY (RNS) — Pope Francis will travel to Canada Sunday (July 24) for what he has described as a “penitential pilgrimage” to atone for the Catholic Church’s part in the persecution of Indigenous communities and its mistreatment and alienation of Indigenous children in residential schools.

But Francis’ six-day apostolic visit isn’t only about bringing the pope’s presence and apology to indigenous people. It will highlight the contribution Indigenous culture brings to the Catholic faith, honoring its care for the environment and the elderly — both topics that are dear to the pontiff.

The pope’s trip may also lay the groundwork for a future Vatican pronouncement on the doctrine of discovery, a justification for colonization of the Western Hemisphere laid out in papal bulls.

Vatican spokesperson Matteo Bruni told reporters on Wednesday (July 20) that “there is a reflection taking place on the doctrine of discovery” at the Vatican, adding that there “might be a development on this theme” after the papal trip.

In April, a delegation of Canadian Indigenous peoples came to the Vatican. During their visit, Francis talked about reconciliation “as part of a journey that can favor the rediscovery and revitalization of your culture, while helping the Church to grow in love, respect and specific attention to your authentic traditions.”

Pope John Paul II brought much the same message when he visited Canada in 1984. “Your encounter with the Gospel has not only enriched you, but has enriched the Church,” John Paul told representatives of the First Nations, Métis and Inuit peoples, adding that their traditions “allow new expressions of the message of salvation and help us to better understand to what extent Jesus is savior and his catholic, that is, universal salvation.”

Francis will visit Maskwacis, south of Edmonton, Alberta, where he will have his first meeting July 25 with elders of the indigenous communities there. He will then walk to a cemetery in silent prayer, accompanied by the sound of the traditional drums, and deliver his first speech.

That afternoon, the pope is expected at Edmonton’s Church of the Sacred Heart to say his first Mass in the country for Indigenous and non-Indigenous attendees. Speaking in Spanish, he will bless a new statue of Saint Kateri Tekakwitha, an Indigenous woman born in the United States in the mid 1600s who kept her Catholic faith in the face of incredible adversity until her death in Canada. Also known as the “Lily of the Mohawks,” she was beatified by John Paul in 1980 and made a saint by Pope Benedict XVI in 2012.

On July 26, after a Mass at Commonwealth Stadium, the largest open-air venue in Canada,  Francis will have a chance to home in on his message of the care for the elderly and the environment at Lac Ste. Anne, a Catholic pilgrimage site an hour west of Edmonton. 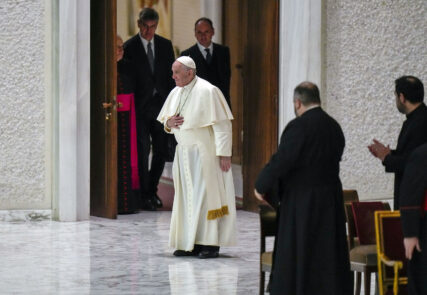 The lake is called “God’s Lake” by some Indigenous peoples, who have regarded it as a holy and healing place for generations. The pope will bless its waters, making the sign of the cross according to the cardinal points following the Indigenous tradition.

The lake has seen dropping water levels in recent years, and scientists are concerned about the loss of animal species thanks to decades of human activity. On Thursday (July 21), Francis called on all nations to protect endangered ecosystems and will likely repeat his appeal in Canada.

Lac Ste. Anne will also give the pope a chance to discuss the elderly’s place in society, as his visit will coincide with the feast day of St. Anne, Jesus’ grandmother and a beloved figure for indigenous Catholics. The 85-year-old pontiff has championed the elderly, noting that many older people are discarded in modern-day societies. He regularly calls for the need for intergenerational dialogue.

On July 27, the pope will travel to Quebec, where he will meet with local authorities and members of Canada’s diplomatic corps. It was Canadian Prime Minister Justin Trudeau’s 2021 speech calling on the pope to come to Canada to apologize for the “cultural genocide” of Indigenous peoples that was the genesis of the pope’s trip, though the Canadian Truth and Reconciliation Commission had similarly urged the pope to visit in 2015.

The treatment of the Indigenous peoples of America came to the fore as the remains of thousands of unnamed individuals were recently found on the properties of residential schools, some of them Catholic, in Canada and in the United States. These schools played a crucial role in separating young Indigenous from their families and stripping them of their culture.

On July 28, Francis will visit the Basilica of Sainte-Anne-de-Beaupré, the oldest pilgrimage site in Canada, where John Paul delivered his speech to the gathered Indigenous representatives more than 30 years ago. Francis will then visit Quebec’s Cathedral of Notre Dame and meet with the local archbishop and religious.

Francis’ last day in Canada, July 29, will see him travel to the remote northern town of Iqualit, an old Inuit fishing ground of roughly 8,000 people in the Nunavut territory. Here, the pope will hold a private meeting with former students at Canadian residential schools, who will talk about their experiences. Francis will return to Rome the following day.

Bruni said the pope’s visit, while focused on Canada, will likely resonate with other Indigenous people south of the Canadian border. “Obviously the pope’s gestures and words have value for all Indigenous peoples,” he said, “including in other areas of Canada and places where similar feelings might have occurred.”