MASKWACIS, Canada (RNS) — Pope Francis issued his first apology to the Indigenous peoples in Canada for the Catholic Church’s role in administering residential schools, which robbed many of their families and culture.

“I am here because the first step of my penitential pilgrimage among you is that of again asking forgiveness, of telling you once more that I am deeply sorry,” the pope said on Monday (July 25) to a crowd that included thousands of Indigenous gathered at the circular arbor at Maskwacis, a traditional ceremonial site of the Cree, Dene, Blackfoot, Saulteaux and Nakota Sioux people, located just south of Edmonton.

“Sorry for the ways in which, regrettably, many Christians supported the colonizing mentality of the powers that oppressed the Indigenous peoples. I am sorry,” Francis continued.

The pope asked for forgiveness for the role Church members played “in projects of cultural destruction and forced assimilation promoted by the governments of that time.” Residential schools often forcibly removed Indigenous children from their families and communities. Recently, thousands of unnamed remains were found on the properties of the residential schools in Canada and the United States, sparking renewed outcry over the mistreatment and alienation of Indigenous peoples.

“The Church kneels before God and implores his forgiveness for the sins of her children,” Francis said in his speech, which took place not far from the Ermineskin residential school. “I humbly beg forgiveness for the evil committed by so many Christians against the Indigenous peoples,” he repeated, adding that the apology comes with “shame and unambiguously.”

The apology was part of Francis’ first official speech since the pope’s arrival in Canada on Sunday (July 24) for a five-day trip that will take him to various Indigenous territories in the country before his departure on Friday. The pope has referred to the apostolic visit as a “penitential pilgrimage” that follows his meetings with First Nations, Metìs and Inuit representatives at the Vatican in March and April, when he also issued an apology.

The pope circled the area aboard his popemobile before sitting on the stage to witness the arrival of the Indigenous leaders. Chief Wilton Littlechild, a former member of the Canadian Truth and Reconciliation Commission and once a student at a residential school, welcomed the pope.

“You have said that you come as a pilgrim, seeking to walk together with us on the pathway of truth, justice, healing, reconciliation and hope,” Littlechild said. “We gladly welcome you to join us on this journey.” 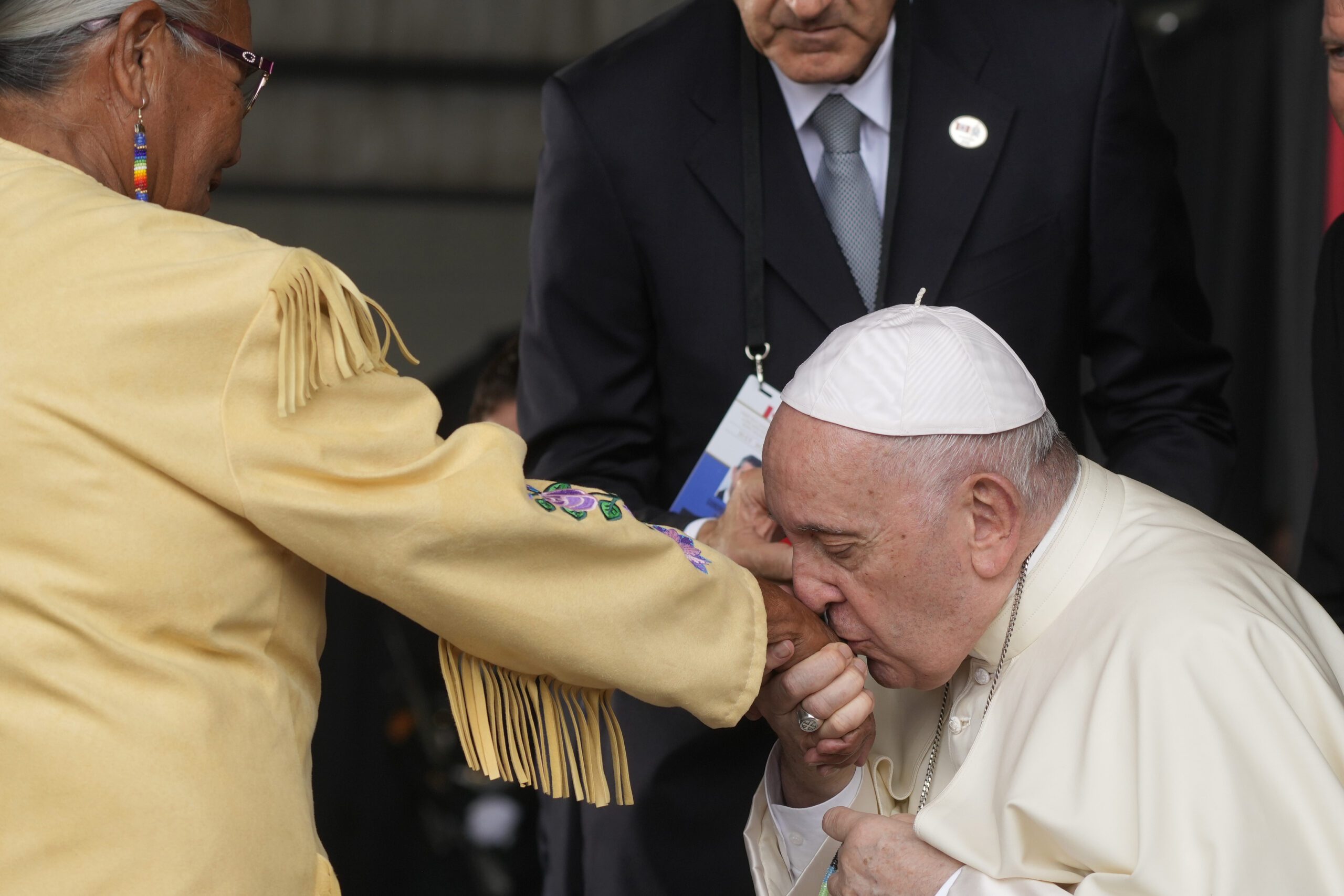 Francis brought to the meeting a pair of moccasins that were given to him by Indigenous delegations at the Vatican as a reminder of the suffering endured by their people at residential schools. He said they were a symbol that kept alive in him a “sense of sorrow, indignation and shame.”

In his speech, the pope spoke of the “deep sense of pain and remorse” he felt in the days leading up to the trip. He voiced his hope that this visit will serve not only as a reminder of the enduring pains of the past but also as the beginning of a journey of healing and dialogue.

Even though remembering can bring discomfort and hurt, the pope said, “it is right to remember, because forgetfulness leads to indifference,” which he said is the opposite of love, quoting the philosopher and Auschwitz survivor Elie Wiesel.

Francis then began to list the devastating effects and consequences of residential schools, from abuse to marginalization and the severance of family relationships. He thanked attendees for sharing their “heavy burdens” and “bitter memories” with him.

The pope’s words were met with tears and silence by those who were present, many of whom were wearing traditional clothing and regalia. Canadian Prime Minister Justin Trudeau was also present at the gathering.

The pope also acknowledged that apologies are not enough. “Dear brothers and sisters, many of you and your representatives have stated that begging pardon is not the end of the matter. I fully agree: That is only the first step, the starting point.”

Francis backed calls to “conduct a serious investigation into the facts of what took place in the past,” while continuing the church’s commitment to assist survivors in overcoming the traumas they suffered. Indigenous advocates have been asking for official records on residential schools to be released by religious and state authorities.

The pope, speaking in Spanish, also said that while his visit won’t allow him to go to many of the country’s residential school sites, his words “throughout this penitential journey are meant for every Native community and person.”

After a traditional song inviting those present to welcome the papal apology, Francis recited the Our Father and blessed the thousands who were present.

Earlier that morning the pope visited the marked and unmarked graves at a nearby cemetery, just a few steps from the Ermineskin residential school. Drums accompanied him to the graveyard but paused as he reflected in silent prayer. Francis sat in the wheelchair under the rain as he prayed over the graves.

“On this first step of my journey, I have wanted to make space for memory. Here, today, I am with you to recall the past, to grieve with you, to bow our heads together in silence and to pray before the graves,” the pope later said. “Let us allow these moments of silence to help us interiorize our pain. Silence. And prayer.”