“The desecration of Gandhi statues and anti-Hindu hate crimes will not be tolerated in Richmond Hill or anywhere in New York state,” said Rajkumar, the first Hindu American to be elected to New York state office.

With Rajkumar at the Shri Tulsi Mandir were religious leaders of several faiths, state politicians as well as worshipers at the temple.

“Hinduism is not just about tolerance,” said Rajkumar. “It is about actively loving people from different backgrounds and different faiths. This was Gandhi’s dream.”

Assemblyman David Weprin, who is Jewish and represents parts of Richmond Hill, said people of all religions needed to speak up against the attack. “An act of hate against any community is an act of hate against all of us,” said Weprin. “I may not come from a Hindu background, but I view this vandalism as if it were an act against my own synagogue.”

Harpreet Singh Toor, chairman of public policy and external affairs for the Sikh Cultural Society, said the vandalism at the mandir points to the necessity to stop the rise in religious hate crimes across the United States.

“Unless we are united against hate, we can’t eliminate hate,” said Toor. “And to do that, we have to make sure that every religion is respected, and every human being is respected.” 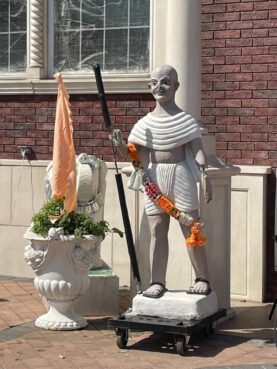 Hate crimes against the South Asian community in New York have increased over the past few years, including a brutal assault against a Hindu priest in Queens in 2019 that prompted a state hate crime investigation by then-Gov. Andrew Cuomo. Since early April of this year, there have been at least four violent attacks against Sikh men in the South Richmond Hill neighborhood alone.

This is also the second alleged hate crime against the Shri Tulsi Mandir, and the second toppling of a Gandhi statue in New York this year. In February, an 8-foot bronze statue of Gandhi in Union Square was defaced. Similar attacks in California and Washington, D.C., have led to an increase in national attention toward anti-Hindu violence and hate speech, including a study released by Rutgers University highlighting a significant rise of Hinduphobia on social media.

The mandir’s statue of Gandhi, whose practice of nonviolence in the fight for Indian independence from Britain inspired Martin Luther King Jr. and Nelson Mandela, was allegedly pushed into a tulsi plant by three individuals around 2:30 a.m. on Aug. 2. The plant, the mandir’s namesake, represents the goddess Lakshmi, adding to the insult for Pandit Lakhram Maharaj, the Shri Tulsi Mandir’s spiritual leader.

“We are all standing here to unite together,” said Maharaj. “Gandhi teaches us that when someone brings hate upon you, you show them love and kindness.”

“An attack on the Gandhi statue is an attack on the ideals of mutual respect, understanding and peace,” said Nikunj Trivedi, president of the Coalition of Hindus of North America. “We therefore call upon law enforcement, public officials and the general public to stand with the Hindu American community in upholding these ideals.”

Pandit Ram Hardowar, president of New York’s Federation of Hindu Mandirs, offered “condemnation at the highest level” for the attackers, while recognizing that Gandhi himself would discourage any acts of hatred or revenge in response to the crime.

Naidoo Veerapen, public relations officer for the Federation of Hindu Mandirs, said that part of the answer is education of the general public about Hinduism. “This goes to show that we need to do more. We have to promote our culture and our heroes, and hopefully non-Hindus and non-Indians will learn more about him and consider him with affection rather than hatred and desecration.” 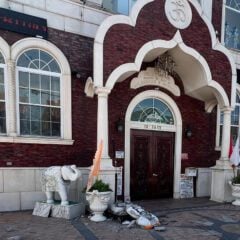