(RNS) — In the Trump years, white evangelical Christians deepened their association with political power and doubled down on their social conservatism, even as — and some observers would say because of — a “precipitous drop” in their overall numbers. Evangelicalism’s 23% share of the American population in 2006 shrank to 14% in 2020.

Despite this decline, evangelicals comprise a large and prominent segment of the population — one too large to be static or monolithic. The makeup of this group has been shifting, and as younger generations take up leadership roles, they’ve grappled with how to reconcile the tendency toward right-wing politics with more progressive approaches to social issues.

Now, a rising cohort of evangelical pastors is looking beyond partisan politics and messaging based on fear of straying from a narrowly defined path. Bishop Robert Stearns is part of this shift. The pastor of The Full Gospel Tabernacle, a thriving Assemblies of God church in Orchard Park, New York, near Buffalo, Stearns said in an interview late last year that evangelicals are waking up to the reality that “the ground underneath their feet has shifted.”

“Younger evangelicals are just leaving the church,” said Stearns. “They might still call themselves spiritual, they might still have a real affinity for Jesus and his teachings, but there are aspects of evangelicalism that have disappointed them and that they no longer trust.”

That distrust was sown in part by evangelicalism’s emergence on the national stage. “The 1980s and 1990s was the era of institutional evangelicalism,” he said, pointing to the rise of “The 700 Club,” Regent University, Liberty University and other organizations that purported to represent and speak for evangelicals. Not everyone in the movement liked what they saw.

Then social media came along and challenged the Goliaths. “It empowers the charismatic individual to have massive influence,” Stearns said. “It gave a platform to individuals who heretofore would not have had that kind of reach.”

Another transformation that was aided by technology is the growth of what used to be the very small liberal arm of evangelicalism. Before, he said, “to be evangelical meant you were right-wing on a whole host of issues, so you didn’t have to have conversation or exploration. Now you have many, many different voices.”

And though many people are leaving the church, those who stay “are viewing issues of climate change, human sexuality and the politicization of religion in America … through a more critical lens.”

RELATED: Creating a Catholic Church she can belong to

The question now, Stearns said, is: “Will the true evangelical please stand up?” 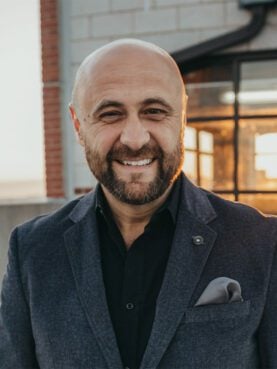 The answer depends on how the younger generations think about what they believe. “The big pivot that we need to make is in how we express our theology,” he said.

Stearns has found success in rearticulating evangelical theology for this new era, in which many evangelicals feel the need to be more open and embracing. “If evangelicalism is anything, it’s about incarnation — that God became incarnate in humanity. We have to come within culture, we have to come and bring God within humanity.”

Stearns is also open to encountering the wisdom of other faith traditions, particularly Judaism. “I don’t think you can understand Christianity apart from Judaism,” he said.

Stearns, who graduated from the University of Valley Forge at 20, rose to prominence as a Christian Zionist. Today he is the founding executive director of Eagles’ Wings, an organization that brings Christian pastors to Israel. At the Tabernacle, he runs a weekly study session on the same Torah portion that Jews read each week in synagogue and has a podcast called “The Bishop and the Rabbi,” in which he talks with rabbis as his weekly guests.

“My Christianity has been so profoundly informed by my relationship with Jewish people and with Judaism,” he said. In studying the Jewish roots of Christianity, he has discovered a deep connection in how the two faiths regard humanity.

“It’s difficult to look at human history or humanity today and not say that there is something very broken within the human condition. But Judaism, and I would argue biblical Christianity, says that before you get to the brokenness of humanity, you must start with the image of God.”

Stearns’ focus on the image of God also has profound implications for how he approaches young people in his church who are wrestling with gender identities or sexual orientations. “It doesn’t matter your political background or your religious background or the human issues that we walk with. God is the God of all of us,” he said.

While he leads with an openness that might have been, in his words, “unthinkable” in an evangelical pastor a few decades ago, he has a deep respect and love for evangelicals. “Some people and some media deliberately mischaracterize evangelicals as bigoted and horrible people. I know evangelical leaders all across this nation who are loving, kind, good-hearted, tolerant, open-minded people,” he said.

Stearns explains how evangelicals are charitable and care deeply about the society in which they live. Even with profound changes afoot in the evangelical movement, he said, “Their humanity and humane actions give me hope for the future of our faith.”