(RNS) — The Supreme Court has temporarily blocked a court order that would have forced Yeshiva University to recognize an LGBTQ group as an official campus club.

The court acted Friday in a brief order signed by Justice Sonia Sotomayor that indicated the court would have more to say on the topic at some point.

The university, an Orthodox Jewish institution in New York, argued that granting recognition to the group, the YU Pride Alliance, “would violate its sincere religious beliefs.”

“We are pleased with Justice Sotomayor’s ruling which protects our religious liberty and identity as a leading faith-based academic institution,” said Rabbi Ari Berman, president of Yeshiva University, in a press release. “But make no mistake, we will continue to strive to create an environment that welcomes all students, including those of our LGBTQ community.”

Eric Baxter, vice president and senior counsel at the Becket Fund for Religious Liberty, which is representing Yeshiva, said in a statement to Religion News Service that the school should not have had to turn to the nation’s highest court “to receive such a commonsense ruling in favor of its First Amendment rights.”

The lawyers for YU Pride Alliance told RNS that the group “has received Justice Sotomayor’s order and will await a final order from the Supreme Court.” In the meantime, they say, the group is committed to remaining a source of safety and support for Yeshiva’s LGBTQ students.

In a phone call with RNS, Marc Stern, chief legal officer with the American Jewish Committee, said it’s not clear whether Sotomayor agreed to block the court order as part of an administrative stay, which would put the lower court’s order on hold until she can consult with her colleagues, or if it’s an indication that the court sees this as a serious issue that deserves full review.

“I think the smart reading of the decision is that Yeshiva has presented serious issues that at least some members of the court will want to give serious attention to,” Stern told RNS.

In either case, he said, “I think many people would have dismissed Yeshiva’s challenge as borderline frivolous, and that no longer is a credible attitude.”

Mordechai Levovitz, founder and clinical director of JQY, a nonprofit that supports Orthodox Jewish queer youth, told RNS in a phone interview, “I feel horrible for the queer students at YU that now have to go to school on Monday at a school that has declared them a threat, that has publicly announced their simply wanting recognition, self esteem, camaraderie is a religious violation and irreparable injury to the school and the students.

Levovitz said that if the school won’t recognize YU Pride Alliance, JQY will financially support the group and rent a room for them to meet in the building next door.

Earlier this week, LGBTQ students and alumni from Yeshiva took to social media to express their concerns about the school’s emergency request to the court. In a video posted on social media, the students challenged Yeshiva’s claim that the undergraduate school is welcoming toward LGBTQ students.

A New York state court had sided with the student group and ordered the university to recognize the club immediately. The matter is on appeal in the state court system, but judges there refused to put the order on hold in the meantime.

A coalition of other religious groups, including the Church of Jesus Christ of Latter-day Saints, the Southern Baptist Ethics & Religious Liberty Commission, Liberty University and Wheaton College, submitted a friend-of-the-court brief on Sept. 2 asking the Supreme Court to block the order requiring Yeshiva to recognize the LGBTQ student group. The Council for Christian Colleges and Universities and a number of Jewish organizations filed separate friend-of-the-court briefs.

The Supreme Court has been increasingly receptive to religious freedom claims in recent years.

In June, conservatives, who hold a 6-3 majority, struck down a Maine program prohibiting state funds from being spent at religious schools and ruled a high school football coach in Washington state has the right to pray on the field after games. 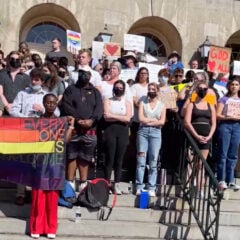