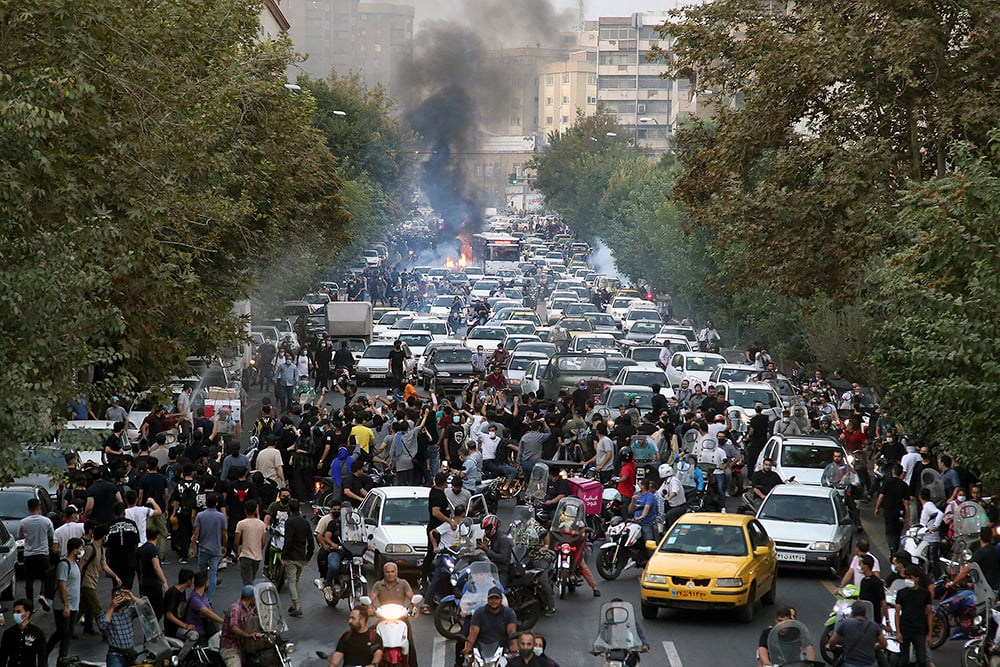 In this Wednesday, Sept. 21, 2022, photo taken by an individual not employed by the Associated Press and obtained by the AP outside Iran, protesters chant slogans during a protest over the death of Mahsa Amini, who was detained by the morality police, in downtown Tehran, Iran. (AP Photo)

(RNS) — Mahsa Amini’s death in Iran for failing to wear the hijab is part of a long line of repression by Tehran. The regime forces its religious views on all, which violates international norms on freedom of expression, women’s rights and freedom of religion or belief. To see a change in behavior, however, more than statements of condemnation are needed.

On September 13, the so-called morality police in Tehran arrested Amini during a family vacation to the capital. Her family reports police beat her while in custody at a jail holding dozens of other women. She was rushed to a Tehran hospital with severe brain injuries, resulting in a coma and her ultimate death.

Her death has resulted in nationwide protests at a level not seen in years. During his New York visit to the UN General Assembly, Iranian President Ebrahim Raisi condemned “acts of chaos” in an ominous warning to protesters. While saying he ordered an investigation, he defended her arrest for wearing “unsuitable attire.”

Women across Iran are burning their hijabs in solidarity with her. Amini’s death has uncovered for the world Iran’s heavy restrictions on women’s rights. Repression is state policy.

And other groups have suffered under this forced religious policy. A sharp escalation of Bahá’í persecution in recent weeks has alarmed observers. UN experts recently spoke out, declaring Tehran’s anti-Bahá’í policy “bears all the signs of a policy of systematic persecution.” Women hold up images of Iranian Mahsa Amini as they shout slogans during a protest against her death, outside Iran’s general consulate in Istanbul, Turkey, Wednesday, Sept. 21, 2022. Protests have erupted across Iran and the Middle East in recent days after Amini, a 22-year-old woman, died while being held by the morality police for violating the country’s strictly enforced Islamic dress code. (AP Photo/Francisco Seco)

Since the 1979 Islamic Revolution, authorities have forced their political and religious worldview on the diverse country. The hijab requirement and Bahá’í persecution are two examples. The state forces the hijab on women through morality police enforcement, similar to Taliban policies in Afghanistan. In addition, the Iranian government, since the revolution, has viewed and treated the Bahá’í faith as a “deviant sect of Islam.”

Iran will not quickly end its hostility toward women’s rights activists and religious minorities. Therefore, statements of condemnation are essential but not enough. To send a message that will reverberate in Tehran, consequences are required.

The biggest ticket item is the nuclear negotiation, which should include these issues and other human rights concerns. Reaching a deal is unlikely in the near term due to Iranian resistance over key details. However, should the parties revive nuclear talks, including a human rights component would fill a glaring gap in their scope and purpose.

But action can happen now. The United States also has direct tools at its disposal. Many welcomed the U.S. Department of the Treasury’s Office of Foreign Assets Control (OFAC) quickly designating the morality police and their leadership for their “abuse and violence against Iranian women and the violation of the rights of peaceful Iranian protestors.” OFAC stated, “The Morality Police are responsible for the recent death of 22-year-old Mahsa Amini, who was arrested and detained for allegedly wearing a hijab improperly.”

Using these tools with like-minded allies against Iranian officials who oversee the regime of persecution could create disincentives for further abuse. Recognizing the religious freedom implications, the U.S. Department of State could issue a special sanction under Iran’s designation as a “country of particular concern” for severe religious freedom violations. No administration has levied a specific sanction under Iran’s CPC designation for religious persecution.

In addition, the United States and other nations can bring persecuted communities out of Iran to safety through a generous asylum process. Here, Congress has a role to play, as USCIRF recommended, by taking steps to “reauthorize and exercise oversight to ensure implementation of the Lautenberg Amendment, which aids persecuted Iranian religious minorities seeking refugee status in the United States.” 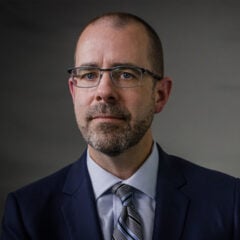 Overall, reversing Iranian repression will require consequential diplomacy that extracts a cost for continued abuse. The tragic death of Mahsa Amini is best remembered by launching new efforts to target persecuting officials, their families and businesses. It would be the first step toward accountability and could spur needed reforms for women’s rights and religious minorities.

(Knox Thames is a former State Department official, serving in the Obama and Trump administrations as the special advisor for religious minorities. He is writing a book on ending persecution. Follow him on Twitter @KnoxThames. The views expressed in this commentary do not necessarily reflect those of Religion News Service.)