(The Conversation) — Cardinal Joseph Zen will stand trial on Sept. 19, 2022, in Hong Kong for his role as a trustee of the 612 Humanitarian Relief Fund. This organization paid legal fees and medical bills for Hong Kongers protesting the Extradition Law Amendment Bill. This 2019 legislation would have allowed extradition to the People’s Republic of China. Many residents viewed this as a subversion of Hong Kong’s semi-autonomous political system, leading to large-scale protests, political unrest and a police crackdown. It also prompted Beijing’s further direct intervention in Hong Kong’s governance.

For the Chinese Communist Party, this organization’s support of protesters and alleged collusion with foreign forces violated the party-mandated national security law. This law has since been applied retroactively.

A retired bishop of the Hong Kong Diocese, Cardinal Zen has long supported Hong Kong protesters, critiqued Beijing and criticized the Vatican’s rapprochement with the Chinese Communist Party. Chinese Catholics see the arrest as an attempt to intimidate and prevent activism among Hong Kong’s Catholic community.

To understand why the Chinese Communist Party would feel intimidated by a 90-year-old man and threaten him with life in prison, it is important to go beyond narrow, concrete effects – such as a cowed Catholic community – and identify the principles held by the leadership. As a former military diplomat currently researching the link between philosophy and foreign policy, I argue that Cardinal Zen’s threat to the Chinese Communist Party lies not in his support for democratic reform, but as a competing source of political authority.

The party’s morality of hierarchy

During a 1997 speech at Harvard University, Jiang Zemin – then the general secretary of the party – praised classical Chinese thought and tied it to contemporary values and the state’s development. Today, General Secretary Xi Jinping routinely mentions classical philosophy in his speeches and noted at the 19th National Congress that the development of socialism with Chinese characteristics will build upon Chinese culture’s traditional vision, concepts, values and moral norms.

Classical Chinese ethics begin with the existential centrality of the family. Fan Ruiping, a researcher in Confucian ethics at the City University of Hong Kong, notes Confucianism sees the family as the basic structure of human existence, not simply a social institution. Thus, the family becomes the standard against which behavior is judged. For example, to protect the family, Confucius argues it is moral for a son to hide the misconduct of his father.

According to the Yongle Emperor, an emperor who ruled in the 15th century, the entire world is a single family. Within this system, one’s position is defined by one’s role, grounded in the five Confucian relationships: ruler to subject, father to son, husband to wife, elder brother to younger brother, and friend to friend. Each of these is both reciprocal and hierarchical. The moral individual conforms to the role one fills in society and treats others according to theirs. 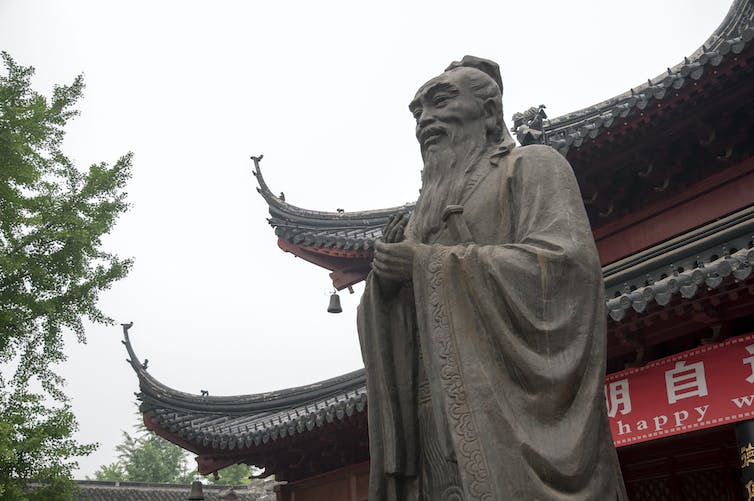 Confucianism teaches that people’s positions and responsibilities in society are based on five key kinds of relationships.
Feifei Cui-Paoluzzo/Moment via Getty Images

Even in contemporary Chinese society, friends treat each other as elder and younger siblings, such that in any situation there is a hierarchical relationship – an older friend is addressed as “elder brother” or “elder sister.” In calling another “elder brother,” one’s own position in that reciprocal relationship – “younger” – becomes obvious.

Through identification of the family as the moral standard and its extension throughout society based on the five relationships, Confucianism views a moral society as a unified family, ordered hierarchically. At the top of the hierarchy sits the emperor, whose relationship with subjects mirrors that between father and son. One serves the rulers as one would serve one’s father or elder brother.

In this view, society is well organized when each person fills the assigned role, paying appropriate deference to those above and acting benevolently toward those below. As Confucius stated, “The ruler is the ruler; the minister is minister; the father is father; and the son is son. That is government.”

According to Confucianism, order, stability and prosperity are maintained when all subjects fill their proper roles. The danger of ignoring this lesson was highlighted by the chaos of the Cultural Revolution, when Chairman Mao Zedong used students to attack those in the party who opposed him. It was also evident in the 1989 Tiananmen Square massacre, when the party allowed the students to develop moral authority and had to resort to military force to crush peaceful student protests. The consequences of losing control was made stark two years later when the Soviet Union collapsed.

Cardinal Zen and challenge to hierarchy

According to its moral principles, the party can tolerate no competition for authority, and has a long history of eliminating those who present a challenge to the party’s position. For example, following the 1956-57 Hundred Flowers Campaign that encouraged engagement from intellectuals, Mao Zedong used the Anti-Rightist Campaign to eliminate their growing authority. This campaign sought to refute anti-regime commentary made by intellectuals, punishing about 550,000 of them, many with reform through labor.

The principle of hierarchy can also be used to understand and predict how events can unfold. For example, if Cardinal Zen dies in custody, he could become a martyr of the protest movement – hardly ideal for the Chinese Communist Party. Still, the leadership’s philosophy suggests it would be even worse for the party to let Zen continue his activism and become a more active threat to its moral and political monopoly.

To remain at the pinnacle of China’s moral hierarchy, the party will need to remove alternative sources of authority. Through his criticism of the party and the Vatican, Cardinal Zen has shown the potential of transforming into a political leader in his own right.

As a possible alternative source of authority, Cardinal Zen has become the latest victim of the party’s moral hierarchy; he will not be the last.

News
Members of US religious freedom panel speak out against China-Vatican deal
Follow us on Facebook!
Submit your photos to RNS