VATICAN CITY (RNS) — A new documentary titled “The Letter,” directed by Emmy-winner Nicholas Brown, premiered at the Vatican on Tuesday (Oct. 4). The letter of the title is Pope Francis’ 2015 encyclical, Laudato Sì, addressed to “all people of good will” and urging an interconnected vision for humanity and the planet.

Brown, who has directed many environment-focused documentaries, voiced his hope that the movie will encourage people to “abandon illusions of otherness and come together” to protect the environment.

The premiere on Tuesday took place on the day of the feast of the pope’s namesake, St. Francis of Assisi, who was known for his commitment to peace, to the impoverished and to the environment. It also coincided with the day the Paris Climate Agreement accords, which the Holy See signed this summer, come into effect at the Vatican.

But rather than the policy decisions of those in power, the 80-minute feature focuses on how people at the grassroots level can bring about change. In the movie, a diverse group of climate activists, Indigenous people, scientists and faithful meet with Pope Francis to dialogue about the environment.

“Voices from the peripheries are usually ignored in global summits and environmental decision-making, typically dominated by powerful corporate interests,” said Cardinal Michael Czerny, who heads the Vatican Department for Promoting Integral Human Development, during a press conference presenting the movie at the Vatican on Tuesday.

“The film and the personal stories powerfully show that the ecological crisis has arrived and is happening now. The time is over for speculation, for skepticism and denial, for irresponsible populism,” the cardinal added. The movie will be available to audiences for free on YouTube and dubbed in Spanish, Italian, Portuguese and French.

Among the cast of climate activists who are represented in the movie is Chief Cacique Odair “Dadá” of the Borari people, who live in the lush Amazonian jungles in Brazil. The Indigenous leader was captured and tortured by mercenaries after he used GPS technology to expose the illegal activity of loggers who were destroying his home.

Under the presidency of Jair Bolsonaro, Brazil has seen a rapid deforestation of the Amazon forest, and elections in the country were underway at the time of the premiere. “I am here in the name of the forest, in the name of the Indigenous population,” said Chief Dadá at the Vatican press conference, where he advocated for “a new kind of politics” that protects the environment and those most affected by its destruction.

“Today we suffer the destruction of the forest firsthand,” he said. “I hope that all presidents in all countries will come together to save and protect the forest.”

The movie also shows the work of the young climate activist Ridhima Pandey from India, as well as the work of husband and wife Greg Asner and Robin Martin to protect the coral reefs and marine biology. Arouna Kande highlights the devastating effects of climate change in his home country of Senegal, while Preacher of the Papal Household Cardinal Raniero Cantalamessa, who has served in that role since the papacy of John Paul II, details the commitment of the Vatican to protecting creation. 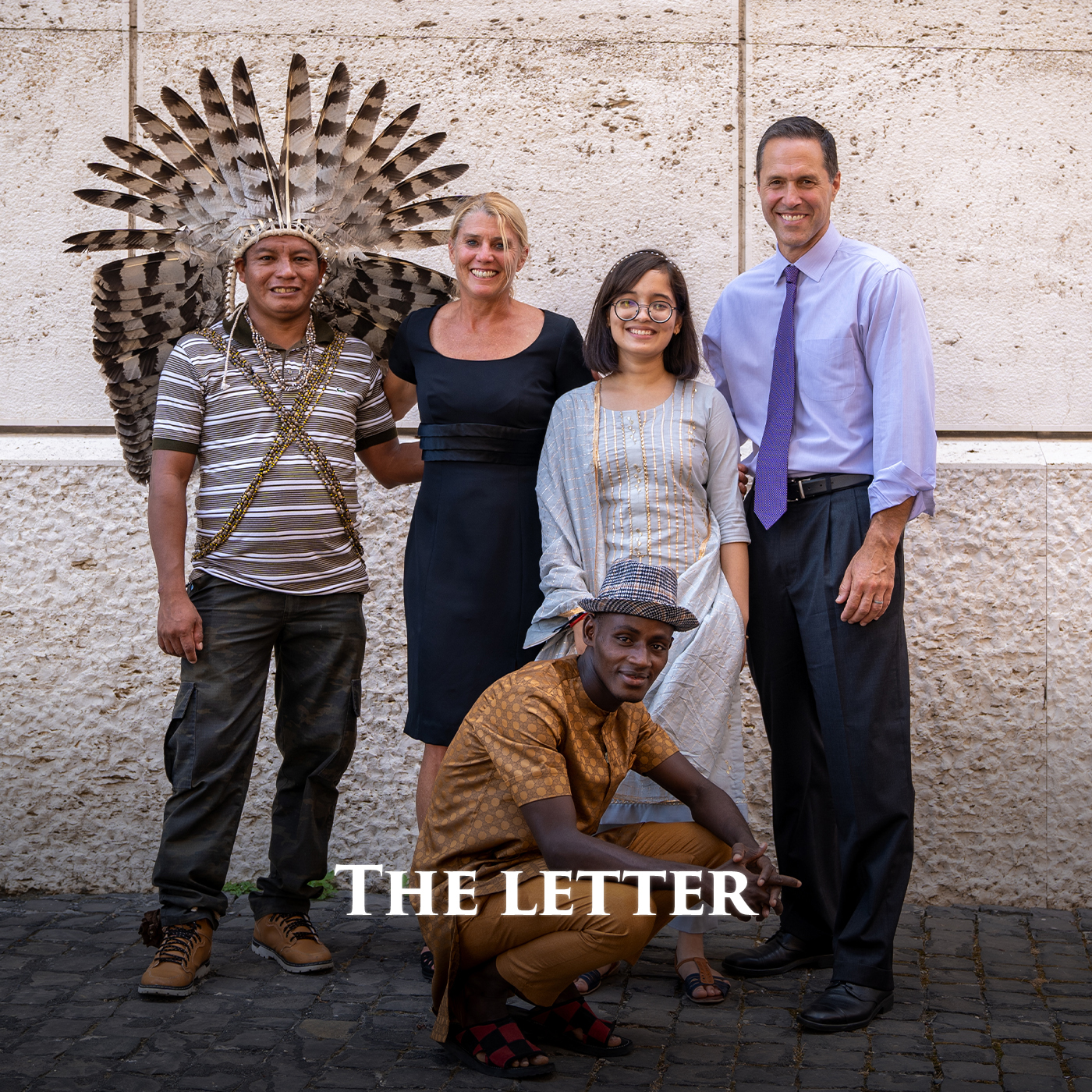 Some of the people featured in “The Letter.” Courtesy photo

“The essence of this film is to bring Laudato Sì, this wonderful book, to new audiences,” Lorna Gold, president of the Laudato Sì Movement, a network of over 900 Catholic organizations acting and lobbying for the environment, said at the press conference.

The film tells the “story about dialogue between different voices coming together for our common home,” she said, adding that, while the world is in deep crisis, she believes “the message of the film that resonates so strongly is that there is hope.”

Gold said the movie will be available for community streaming at schools and parishes where she hopes people will engage in the same dialogue that occurs in the film. She said that while the question of climate change is often unheard among political and religious leaders, “change is coming from the grassroots,” with lay people and religious sisters leading the charge.

Speaking at the press conference, Intergovernmental Panel on Climate Change Chair Hoesung Lee praised the movie as a symbol of the “dialogue between faith and science” and urged the two to come together to find solutions, as “the stakes have never been higher.”

Listing the “new normal” of heatwaves, hurricanes, droughts and floods that occur all over the planet, Czerny said the movie provides “a pathway” for encounter and dialogue among people.

“This beautiful film — a heartbreaking yet hopeful story — is a clarion cry to people everywhere: Wake up! Get serious! Meet! Act together! Act now!” he said.

RELATED: Synod on Synodality had its doubters, but it’s proving to be balm for ‘enduring wounds’