“This is a worrying development we hope the #Azerbaijani gov will rectify immediately by releasing Seymur Mammadov, ceasing harassment of Jehovah’s Witnesses & permitting conscientious objection as provided in the country’s constitution,” said Nury Turkel, chair of the U.S. Commission on International Religious Freedom, in a Tuesday (Oct. 4) tweet.

A spokesman for the Jehovah’s Witness said Mammadov had “repeatedly” expressed willingness to perform an alternative civilian service.

“However, the government has failed to offer conscientious objectors that option despite repeated criticism from the UN and other international rights bodies,” said Jarrod Lopes, a spokesman for Jehovah’s Witnesses, in a statement.

Jehovah’s Witnesses have long been conscientious objectors to military duty, pointing to the biblical Prophet Isaiah’s words about beating “swords into plowshares.”

Forum 18, a news service that monitors religious liberty violations in Eastern Europe and the former Soviet Union, reported on Mammadov’s Sept. 22 detention, which Jehovah’s Witnesses in the capital city of Baku called a “very unexpected decision” in light of a judgment by the European Court of Human Rights against Azerbaijan in another case involving Jehovah’s Witnesses last October.

Last year, the European court ruled that the country had violated the human rights of Emil Mehdiyev and Vahid Abilov, two Jehovah’s Witnesses who were convicted in 2018 after they declined compulsory military service. Azerbaijan was ordered to pay each of the young men 3,500 Euros (about $3,500 U.S.).

The State Department’s 2021 International Religious Freedom Report noted that that decision “brought to seven the number of conscientious objectors from the country whose human rights had been violated by the government according to the court, and to whom the government had to pay compensation.”

In a March document submitted to the United Nations’ Office of the High Commissioner for Human Rights, Jehovah’s Witnesses representatives said young members of the faith “live in constant fear of prosecution and imprisonment” in Azerbaijan and often cannot leave its borders because they cannot obtain a passport without a military card.

“Despite its commitments to the Council of Europe, Azerbaijan currently has no provision for alternative civilian service,” the document states.

An official in Azerbaijan indicated to Forum 18 that is still the case.

“We’re not to blame,” an officer at Goranboy District State Service for Mobilization and Conscription told Forum 18. “There is no alternative service.”

Another Jehovah’s Witness, Royal Karimov, was called to a state conscription office in July, Lopes said. Though assured he could return home after submitting documents about his conscientious objection, Karimov was taken into custody immediately and later transferred to a military unit for confinement.

RELATED: Jehovah’s Witnesses return to door knocking ‘like getting back on a bicycle’ 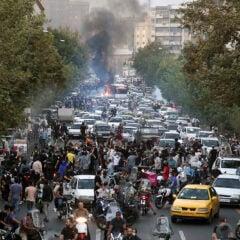