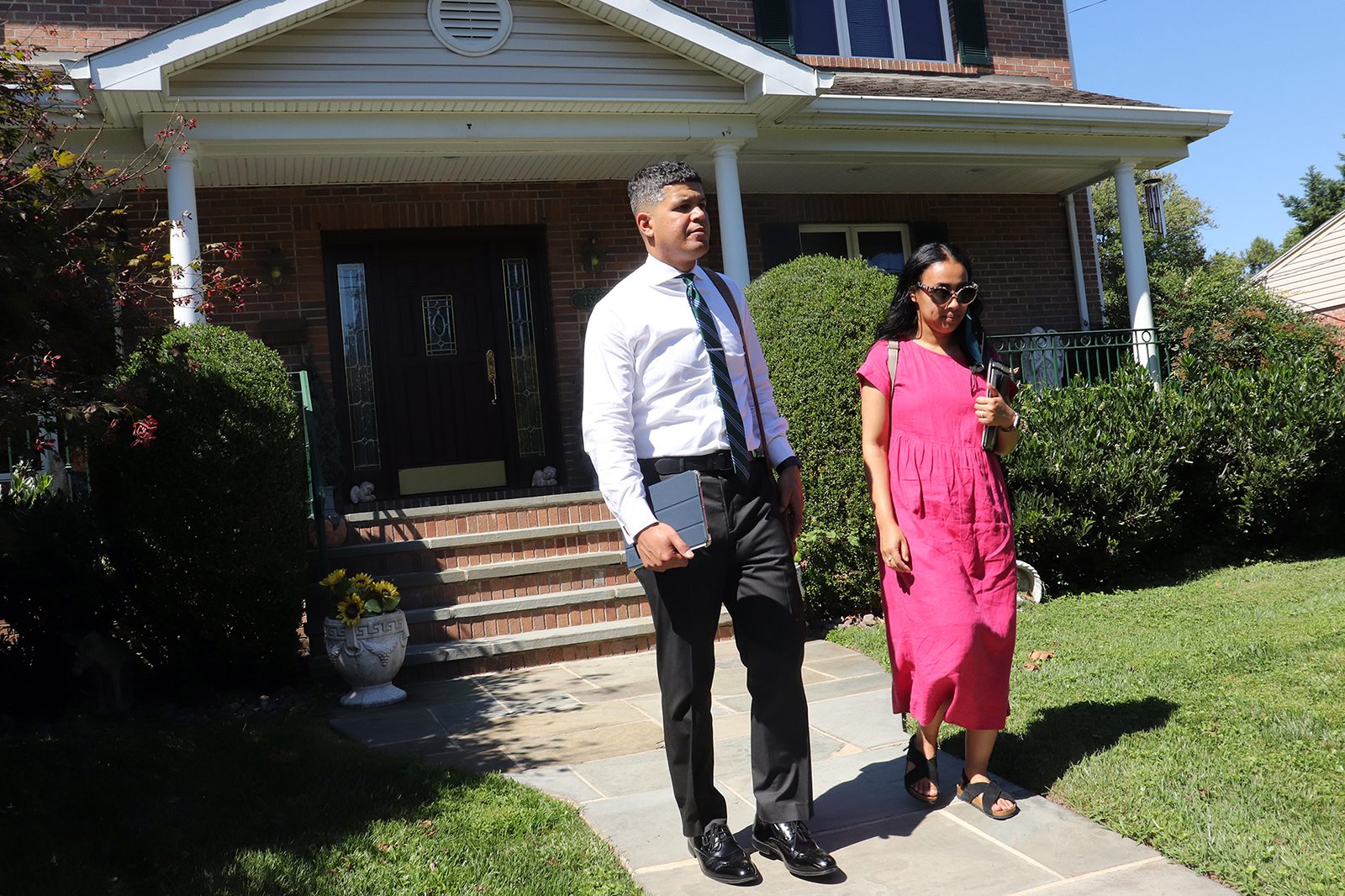 Chris and Aisha Sees, of Takoma Park, Maryland, leave a home while door knocking in Silver Spring on Thursday, Sept. 1, 2022. Jehovah’s Witnesses returned to the traditional practice of door knocking after a lengthy pause due to the pandemic. RNS photo by Adelle M. Banks

SILVER SPRING, Maryland (RNS) — When the pandemic hit, Aisha Sees thought she’d just be taking a short break from the “main hallmark” of her faith.

Like other Jehovah’s Witnesses, she turned to letter writing and phone calls instead of the traditional knocking on doors.

“The preaching never stopped for us,” she said. “It’s just, the way we went about it changed.”

But after almost two and a half years, she hit the pavement again, joining her husband, Chris, and others in Silver Spring, Maryland, on Thursday (Sept. 1), the first day Jehovah’s Witnesses returned to door knocking.

“I do like seeing people’s faces,” she said. “It adds a different layer.”

A group of 10 people, most from a neighborhood Kingdom Hall, or congregation, fanned out in the northern D.C. suburb under an almost cloudless blue sky, heading to houses on tree-lined streets in a “territory” mapped out for them for that day. 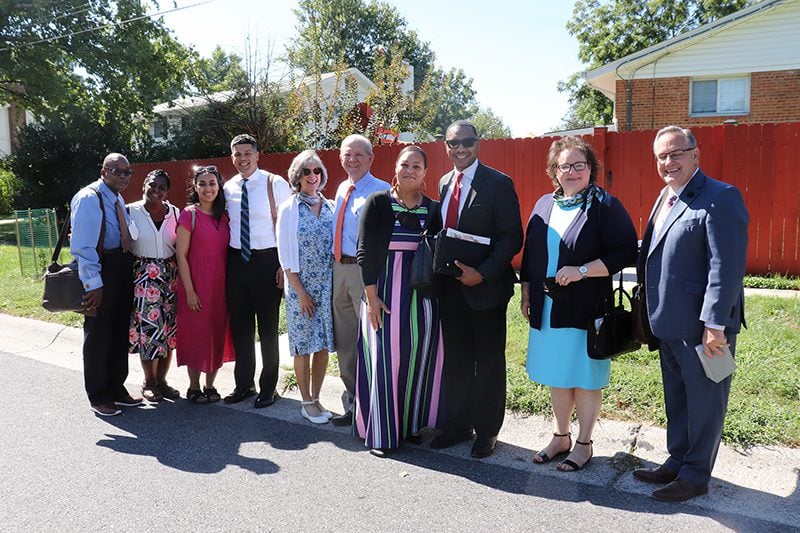 A group of Jehovah’s Witnesses, most from the Kingdom Hall in Silver Spring, Maryland, pose for a picture before door knocking in their community on Thursday, Sept. 1, 2022. RNS photo by Adelle M. Banks

Kelly Osborn, the mid-Atlantic regional spokesman for the faith group, said finding people who don’t want to talk with them comes with the territory.

“We respectfully dismiss ourselves and bid them a good day,” he said. “You can have a good conversation with someone who doesn’t agree with you.”

But there were lots of reasons for people to spend as short a time as possible conversing with strangers on a sunny day.

One mother had a hungry little girl nearby who was more interested in keeping lunch on schedule. Another person answering the door didn’t speak their language — though Witnesses sometimes carry iPads to share information in an array of tongues, if given the time. Another was busy painting the interior of her home.

In one instance, there was an audible slammed door.

“He said, ‘We don’t need you in this neighborhood,’” Osborn said of the response he and his wife, Tina, received.

The Osborns and the others, all in skirts, dresses or ties, also had some more receptive interactions. And, they agreed, over the course of the two hours, they found more people at home than they were used to before the pandemic — a result, they thought, of the new age of remote employment. 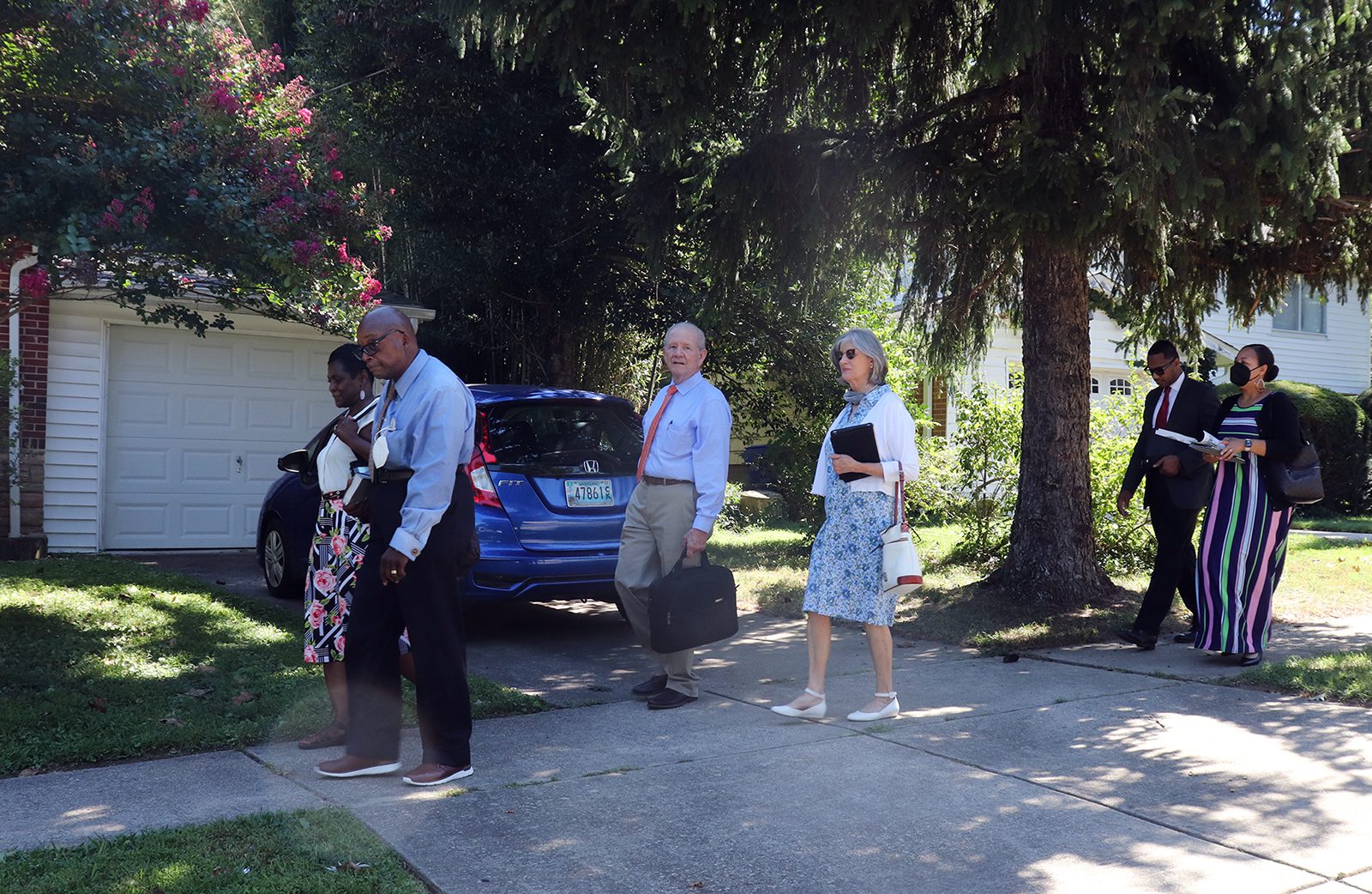 A group of Jehovah’s Witnesses from the Kingdom Hall in Silver Spring, Maryland, returned to door knocking in their community on Thursday, Sept. 1, 2022. RNS photo by Adelle M. Banks

Chris Sees engaged in small talk with a man who appeared to be housesitting and gave him a tract. As they turned to leave, thinking of the homeowners who would be returning, the man called after them, “Wait, leave one for them, too!”

When people are less open to them, the Witnesses said, they focus on those who take a tract, read an “Enjoy Life Forever!” brochure or enroll in a Bible study program.

“It’s not personal; they don’t know us,” said Jean Hockman of Silver Spring, who first did door knocking with her husband, Mitchael, 48 years ago. “We try not to take it personally.”

As they walked, some of the Witnesses explained that they try to match their secular lives with their spiritual mission by having flexible jobs.

Chris Sees already knows he can return in a week to a man with triplets who said he was busy but would meet with him another day. Sees works at a coffee shop, and his wife works for a communications center, so they can be available for Thursday to be a “service day.”

Kelly Osborn, who also works part time as a construction company owner, said Witnesses visit neighbors on the weekends or evenings if they have 9–5 weekday jobs.

Members of the faith that dates to the 1870s believe in God, whom they call Jehovah, but not the Trinity. They point to Jesus’ instruction to his apostles to go out “two by two” as the reason they do the same. 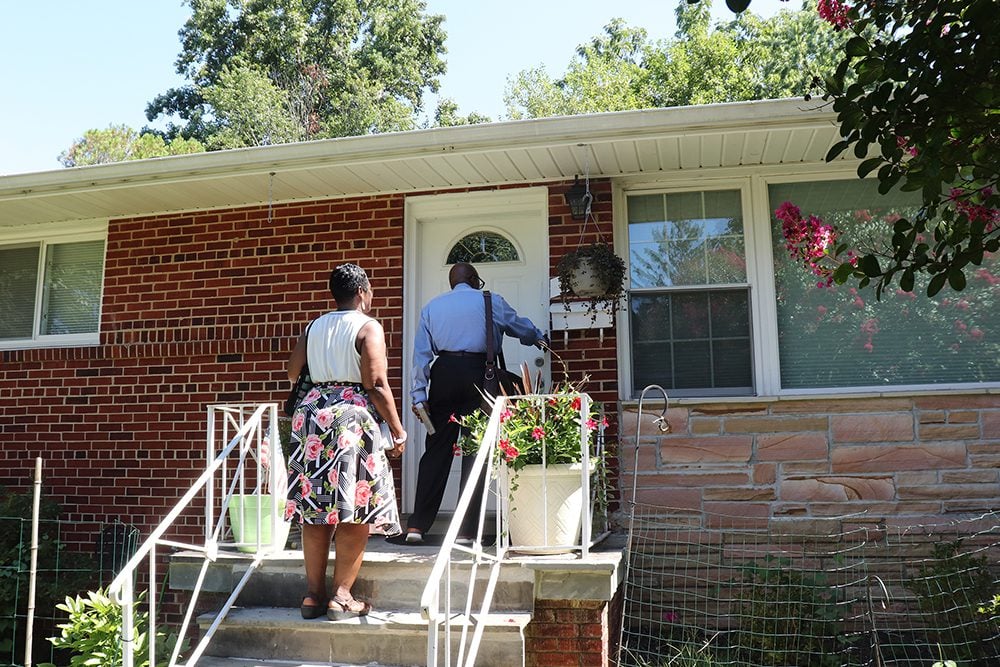 Reneé and Kevin White were among Jehovah’s Witnesses returning to the traditional practice of door knocking in Silver Spring, Maryland, on Thursday, Sept. 1, 2022. RNS photo by Adelle M. Banks

Though their doctrine remains unchanged, the means of door knocking has expanded.

They sometimes ring doorbells — and sometimes speak to Alexa. There are more Ring cameras or other types of home surveillance watching them. And they keep in touch with each other via cell phones; previously, Mitchael Hockman recalled, groups “just stayed together” to keep track of one another.

People of other faiths also have returned to the streets after the pandemic limited them to online, mail or media outreach.

“Now that most segments of society have reopened with few to no restrictions, we have Bible workers studying with people in the home, literature evangelists knocking on doors, as well as those making appointments with contacts generated from events such as county fairs,” said a spokesperson for the Seventh-day Adventist Church in North America.

Missionaries of the Church of Jesus Christ of Latter-day Saints, or Mormons, another group long known for door knocking, moved away from the practice about a decade before the start of the COVID-19 pandemic, said Sam Penrod, a spokesman for the LDS church. “Social media has become an effective way of reaching people interested in learning more about the Church in recent years and became invaluable in the early months of the pandemic,” he said.

Kelly Osborn said he tries not to be disappointed when a door doesn’t open to them because he views part of their work as a ministry of presence.

“If people don’t come to the door and they see Jehovah’s Witnesses on the street, that’s good for us,” he surmised. “Even if they don’t answer their door, we still consider it giving a witness walking down the street.” 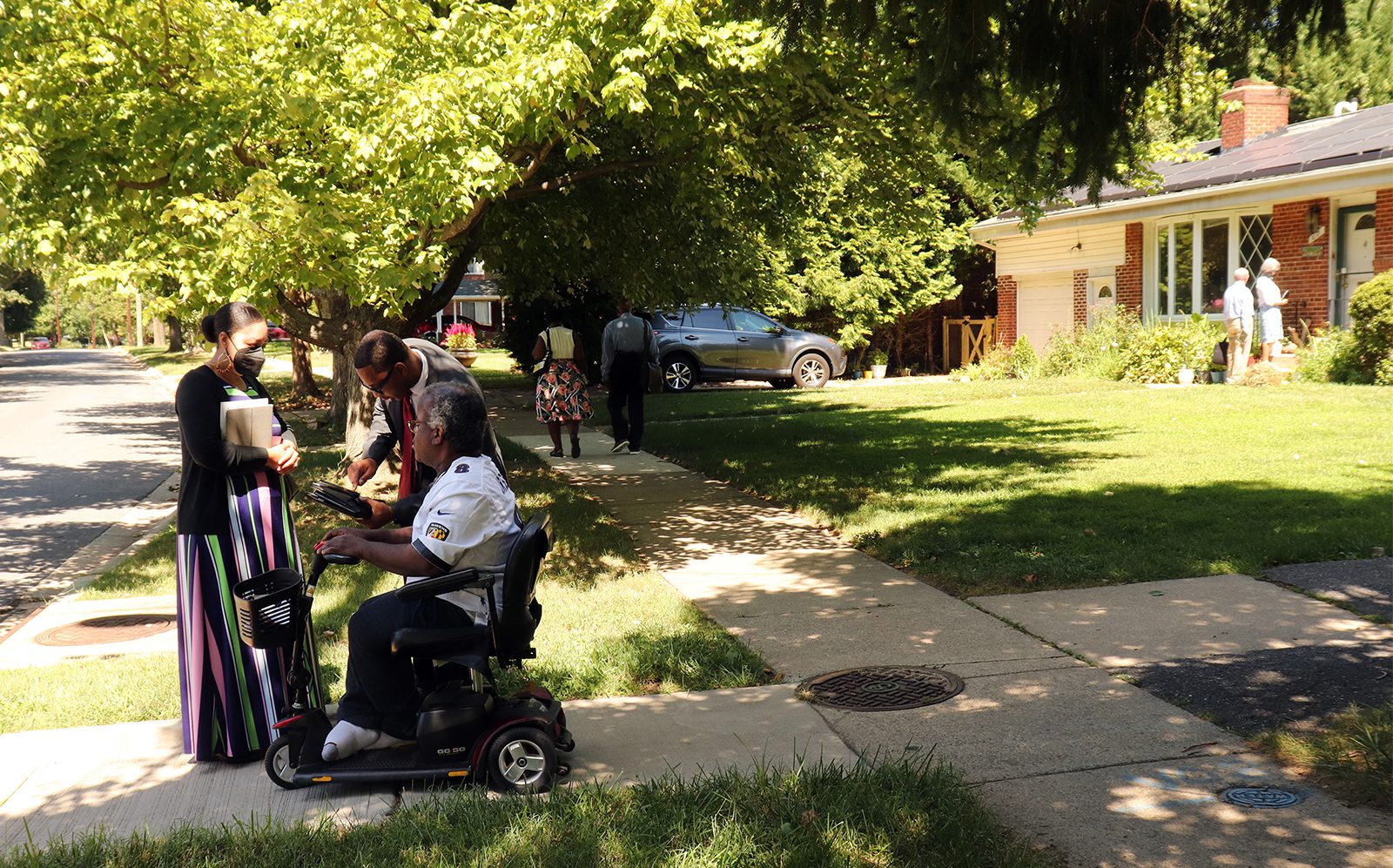 Tameka and Limmel Richardson, of Silver Spring, Maryland, speak with resident Charles Ogwo, seated, as other Jehovah’s Witnesses head to nearby houses in the community to knock on doors as they returned to the traditional practice on Thursday, Sept. 1, 2022. RNS photo by Adelle M. Banks

But as they strolled on their first official day out, Witnesses also practiced a ministry of opportunity. As Kelly Osborn approached the next house, he handed a tract to a landscape company employee who had just mowed its lawn.

Another couple, Limmel and Tameka Richardson, talked to a man who stopped his motorized wheelchair to chat with them. They got his phone number and plan to visit the man next week.

“This is the first time that I’ve been approached,” said Charles Ogwo, who agreed to a future visit from the couple. “They seemed like nice people.”

Limmel Richardson said another woman they met during their rounds also agreed to take a Bible course with them.

“I feel like all my anxieties were put to ease once I got out there,” he said of his return to a practice he had followed for decades. “It’s like getting back on a bicycle.”

News
Pushed online in pandemic, women of color find safe spaces for faith and healing
Follow us on Facebook!
Submit your photos to RNS