TOKYO (AP) — Japanese Prime Minister Fumio Kishida donated religious offerings on Monday to a Tokyo shrine viewed by Chinese and Koreans as a symbol of Japanese wartime militarism, though he did not visit it in person.

Victims of Japanese aggression during the first half of the 20th century, especially Chinese and Koreans, see the shrine as a symbol of Japanese militarism because it honors convicted war criminals among about 2.5 million war dead.

Critics also consider visits by Japanese Cabinet ministers and other officials to the shrine as a sign of a lack of remorse over the country’s wartime atrocities.

On Tuesday, a group of about 90 conservative lawmakers led by Ichiro Aisawa, a senior member of Kishida’s governing party, visited the shrine together to pay tribute to the war dead. The group also included several deputy ministers in Kishida’s Cabinet.

“I offered my appreciation to the spirits of those who sacrificed their lives for the national policy,” said Takaichi, a regular visitor to the shrine during its biennial festivals and on the Aug. 15 anniversary of Japan’s World War II defeat.

After China and the Koreas reacted with outrage to a visit to Yasukuni by former Prime Minister Shinzo Abe in 2013, Japanese leaders have avoided visiting the shrine while in office. 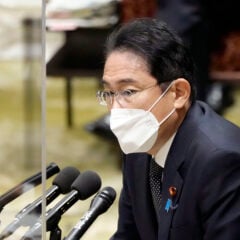 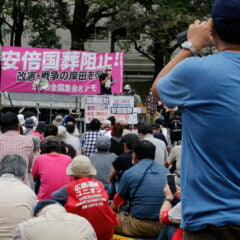 Religion Hub
Half of Japan governing lawmakers tied to Unification Church
Follow us on Facebook!
Submit your photos to RNS