Robinson has repeated his message at least eight times over the past few months at church luncheons across North Carolina hosted by the American Renewal Project, a group dedicated to mobilizing evangelical pastors to run for school boards, city councils, county commissions, the state legislature and beyond.

The project, which has hosted similar events in Iowa, Missouri, South Carolina and Texas, takes the now decades-long effort to get evangelicals engaged in electoral politics one step further. It seeks to bring pastors into elected office.

Robinson, a 54-year-old Republican and a first-time officeholder himself, said the nation needs pastors willing to fight a spiritual war in the halls of power.

If Jerry Falwell Sr. founded the Moral Majority to get evangelicals to lobby Congress on issues of morality, and if the Christian Coalition mobilized Christians to cast ballots, then the American Renewal Project wants pastors to run as candidates on the Republican Party ticket up and down the ballot.

Now in its 17th year, the project reorganized two years ago to focus on regional pastor luncheons in a handful of states. This year, eight of its 19 luncheons were held in North Carolina, drawing more than 1,500 pastors and their wives. The events were free, and no offerings were taken.

RELATED: How America’s conservative youth movement grew a powerhouse on the cult of rage

In addition to the lieutenant governor, each luncheon featured North Carolina Republican Party Chairman Michael Whatley, who promised the pastors that if they run, the party will provide them the logistical support they need.

Driving the project is the Christian nationalist notion that America has strayed from its origins and needs to be restored to its Christian foundations.

“America was founded on the Judeo-Christian heritage and established a biblically based culture,” said David Lane, a Dallas, Texas, political operative who founded American Renewal Project. “We no longer have that. Secularism was officially crowned in the mid-20th century.”

Lane said evangelical donors have given him nearly $50 million since 2005 to support his project and convince pastors to take up the cause.

Those invited to recent luncheons come from various denominations. Most are Southern Baptist, charismatic or Pentecostal. The men — there are few, if any, women pastors — are overwhelmingly white. And despite the commonly used term Judeo-Christian, there are hardly any Catholics, and certainly no Jews.

Among those who spoke at most of the eight events across the state were two Baptist pastors on the Nov. 8 ballot. One is running, unopposed, for commissioner in Bladen County; the other is running for the North Carolina House in heavily Republican-leaning Randolph County. Barring a disaster, both will win. Pastors lay hands and pray for Lt. Gov. Mark Robinson of North Carolina, center left, at a pastors luncheon hosted by the American Renewal Project in Raleigh, North Carolina, on Oct. 10, 2022. The Rev. Gary Miller, director of the project, on stage, leads the prayer. RNS Photo by Yonat Shimron

The two pastors peppered their on-stage appeals with biblical references. One cited Peter, Jesus’ disciple, finding the courage to get out of the boat during the storm. The other paraphrased the Book of Esther so beloved by evangelicals: “You’ve been brought into the kingdom for such a time as this.”

A common refrain at the American Renewal Project is that Jesus’ saying, “Upon this rock I will build my church,” is commonly misconstrued. The Greek word “ecclesia,” often translated as “church,” actually means “assembly.” American Renewal’s supporters take this as a sign that Jesus wanted Christians to have influence in the public square, not just inside the walls of a church.

Project leaders think the strategy is working. They claim 50 pastors ran for various North Carolina offices in this year’s primaries, and 25 won their nominations and will appear on this November’s ballots.

The Renewal Project did not, however, provide a list of those vying for public office, and only a handful could be independently verified. The group does not fund any the pastors’ campaigns.

One reason, for the middling response? Pastors haven’t seen public office as part of their call.

Religious broadcaster Pat Robertson campaigned to become the Republican Party’s nominee for president in 1988. Mike Huckabee, formerly a Baptist pastor and also former governor of Arkansas, also ran for president in 2008 and 2016. Neither came close to clinching the nomination.

It wasn’t until 1978 that it was even possible for pastors in all states to run. Historically, some states had clauses in their constitutions prohibiting clergy from running for office, a holdover from English common law. In McDaniel v. Paty, the Supreme Court struck down the last of those clauses, ruling that a Tennessee law prohibiting clergy members from serving as political delegates violated the free exercise clause of the First Amendment.

“For much of the 19th and 20th centuries there was a general idea that ministerial service was a separate profession from politics and it was incompatible with running for office,” said Daniel K. Williams, professor of history at the University of West Georgia.

Black pastors have, at times, been the exception, and almost exclusively on the Democratic ticket. Adam Clayton Powell Jr., onetime pastor of Harlem’s Abyssinian Baptist Church, served as a Democratic U.S. congressman from 1945 until 1971. The Rev. Jesse Jackson ran unsuccessfully for president in 1984 and 1988. The Rev. Raphael Warnock, pastor of Atlanta’s Ebenezer Baptist Church, is now running for reelection to the U.S. Senate. In local races there have undoubtedly been many more. 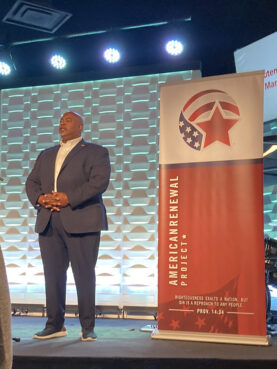 Robinson, North Carolina’s lieutenant governor, who is Black, is an exception. He captured the state’s second-highest elected office after a 2018 video that captured him admonishing the Greensboro City Council for attempting to cancel a biannual gun show went viral. Since winning office in 2020, he has defined himself as a culture warrior, decrying “transgenderism and homosexuality” as “filth,” calling for eliminating the state Board of Education and opposing abortion (though he acknowledged that he and his future wife terminated a pregnancy in 1989).

Most recently, Robinson mocked a brutal attack on U.S. House Speaker Nancy Pelosi’s husband in a Facebook post. “I’m sorry Paul I don’t believe you or the press!!!!” he wrote underneath an image of a Halloween costume for an “attacker” featuring a shirtless, grinning, hammer-wielding man wearing underwear.

Robinson, who is not a pastor, shares with the American Renewal Project a mythical vision of America’s founders. At this week’s pastor’s luncheon at a church in Jamestown, near Greensboro, he rhapsodized about the faith of the Mayflower Puritans and the pioneers who traveled west in covered wagons in search of land. There was no mention of the displacement of Native people or the enslavement of Blacks.

“Those people were made of something different,” Robinson bellowed. “Look at us now. You got people that can’t get around the corner of Walmart without GPS. We have literally forgotten how to do anything.”

At the end of Robinson’s 15-minute testimony, Gary Miller, the project’s director, asks pastors to get up and lay hands on the lieutenant governor and pray for him. For about two minutes, the pastors crowd around the stout, broad-chested Robinson. They lay hands on his back or lift their arms up in the air and pray out loud — a moment reminiscent of Trump’s Oval Office prayer circles. 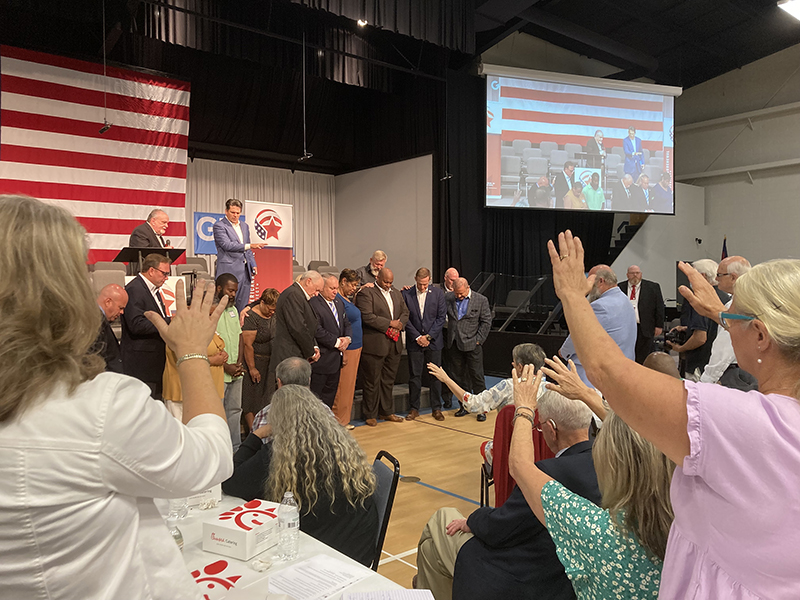 Renewal Project leaders do not take a public stand for former President Trump or unfounded claims that the 2020 election was stolen. Lane, the group’s founder, said he is not involved in helping reelect Trump and does not believe the election was stolen.

His fight, as he wrote in his weekly email, which he says is emailed to 80,000 pastors, is against “profane secularists and cultural Marxism.”

“If North Carolina Christians stay home on election day, then those in active rebellion against God will get the chance to elect their representatives,” he wrote in a recent email to followers, in which he also castigated the Baptist State Convention of North Carolina for holding its annual meeting on Election Day.

The last of this year’s luncheons were held this week. But Lane’s work is not done. Immediately after Election Day, Lane is headed for Israel with a delegation of pastors he wants to convince to run for office. A frequent traveler to Israel, Lane has taken Huckabee and Kentucky Sen. Rand Paul along on these trips.

Cameron McGill, the Baptist pastor and Bladen County commissioner who traveled to Israel with Lane in 2019, is returning  this year to help convince a new crop of pastors to step up and run for office.

“God has called us not just to build our church but to impact the culture,” McGill said. The trip to Israel, he said, may help U.S. pastors see how Jesus himself did so.

This story was produced with a grant from the Stiefel Freethought Foundation.