(RNS) — In the past few decades, faith made loud noises in the campaigns leading up to Election Day, most of it coming from conservative Christians — evangelicals and Catholics — roused to vanquish Roe v. Wade by putting presidents and senators in place to build an anti-Roe Supreme Court. This year, it looked as if the justices’ decision in June to strike down Roe v. Wade might keep satisfied conservative Christian voters home and stir abortion rights advocates from their slumber.

By late summer, Democrats were predicting that the issue would save them from a typical midterm beating.

But abortion politics does not seem to be as powerful as pundits thought. Conservative faith voters have moved on from abortion as a justification to support the Republican Party. They are now being goaded to fight the next culture-war battlefront: transgender people and those who advocate for them.

This pragmatism should come as no surprise. It was manifest in 2016 in social conservatives’ tendency to take in stride the Supreme Court ruling the year before in Obergefell v. Hodges, which secured the right for same-sex couples to marry. Though protecting marriage had strongly animated their political work for years, it is almost completely absent from their rhetoric today.

Conservative Christians took the L on marriage and the W on abortion and are now moving on.

This may be in part because some of their Republican partners wince at the politics of advocating for abortion prohibitions (though not all: see Sen. Lindsey Graham’s proposed federal ban after 15 weeks of pregnancy). “Gender ideology” fits more neatly into the package of anti-wokeness, the GOP’s latest culture war maneuver.

The faith vote has a new wrinkle this year in the fate of nonwhite voters. A new Wall Street Journal poll finds that voting in Black and Hispanic communities is becoming more stratified by education, with those with degrees still largely preferring Democrats, but many of those without moving toward Republicans. In the past, minority voters, including Hispanics, voted Democratic despite their more conservative moral values because they believed the party better maximized their economic opportunity. If large numbers of nonwhite voters now decide that the Republicans are better on the economy as well as providing a better fit on values, Democrats may lose groups that have voted overwhelmingly for them. 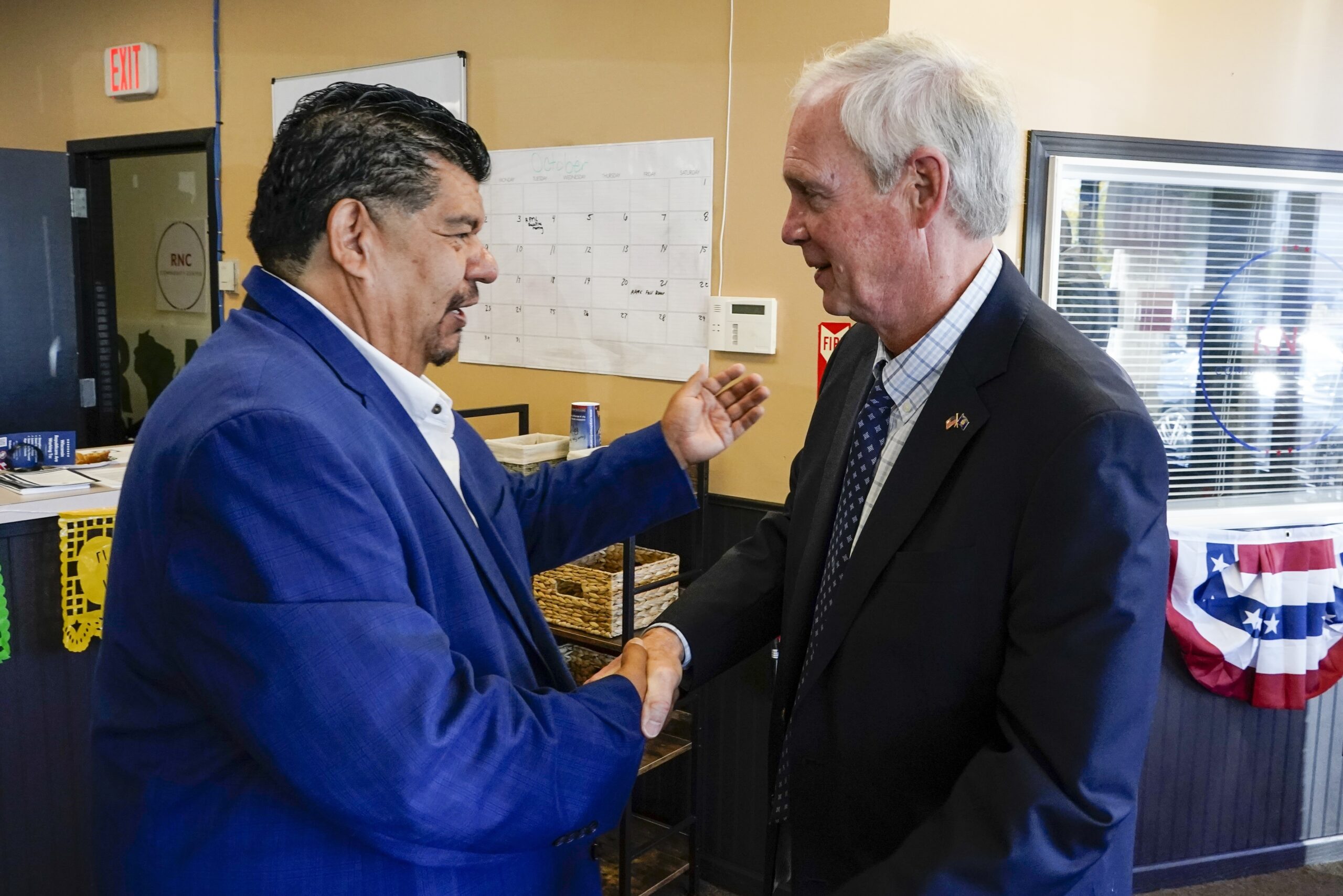 Wisconsin Republican U.S. Senator Ron Johnson, right, and pastor Marty Calderon shake hands at a local Republican election office in Milwaukee, on Saturday, Oct. 8, 2022. In two decades of street outreach on Milwaukee’s south side, Calderon has offered Bible study, gang prevention, a safe place to stay for those battling addiction, and help getting jobs for those newly released from prison. But as he’s watched rising crime threaten those efforts to “clean up” his impoverished neighborhood, Calderon started bringing Republican politicians to his ministry, God Touch. (AP Photo/Morry Gash)

Republicans have tried to give Hispanics, especially, a push, making faith central to their outreach to Catholics and Protestants alike. To the GOP’s delight, lately more Hispanic faith leaders have been echoing the well-established white evangelical line that to be Christian is to be Republican. The weight Democrats put on abortion as a wedge issue after the fall of Roe only helped alienate Latinos affiliated with faith traditions that oppose abortion.

And while many Hispanic faith leaders, including Catholic bishops, still bristle at reflexive Republicanism, Democrats seem to be pushing away at least as many Latino voters as the small but vocal subset becoming more resolutely ensconced in the party’s ascendant socially progressive wing.

The fact that Republicans are eager to let them do it suggests that maybe Democratic elites have misread the mood of the country on this perennially controversial issue — and on other issues commonly connected to Hispanic voters. Democrats err when they assume huge majorities of Hispanics support illegal immigration, transgender affirmation and permissive abortion policies — often with considerable wishful thinking from the mainstream media.

Meanwhile, even as Republicans find new ways to reach faith voters, Democrats have largely pulled back from explicit faith appeals as the party’s base becomes ever more secular. Even among religious cohorts that favor Democrats, voters who attend services more frequently trend Republican, causing Democratic strategists to wonder if faith outreach is even worth attempting.

When we look back at the 2022 midterms, we will likely judge that economic issues trumped all other considerations. Low unemployment will not have been enough to offset rising prices, and, as is typical in midterms and when economic news is bad, voters will hand control of Congress back to the White House’s opponents for the final two years of the sitting president’s term.

But those who follow the story of faith will be watching for longer-term trends — or at least those trends that point toward 2024. Will conservative Christians celebrate victory by pulling Republican Party actors back from their worst excesses of Christian triumphalism or continue to wallow in them? Will the Democrats’ likely 2022 defeat be sufficient to convince them to accept the reality that the United States remains a socially moderate country?

Rational players would do both. But then, the faith card is always a wild card.