VATICAN CITY (RNS) — A self-proclaimed “visual ambassador” of Pope Francis’ message, Canadian artist Timothy Schmalz is on his way to becoming the most prolific Catholic sculptor under the pontiff’s tenure, with another installation at the Vatican this week.

Schmalz, whose most famous statue, “Homeless Jesus,” has been recast and installed in more than 100 locations around the world, has focused much of his work on the central themes of Francis’ pontificate: migration, human trafficking and poverty.

On Wednesday (Nov. 9), Pope Francis blessed the artist’s latest statue in St. Peter’s Square ahead of the 6th World Day of the Poor on Sunday, which the pope established in 2016 to highlight the suffering of the poor.

The bronze sculpture, named “Sheltering,” depicts a life-size homeless man and a hovering dove, representing the Holy Spirit, pulling a blanket over the man. Schmalz hopes the piece can act as a reminder for Christians and non-Christians alike to aid the suffering around them.

“It is our spiritual duty to take care of the least in our community and society,” Schmalz told Religion News Service in a video call from his New York studio on Monday (Nov. 14). 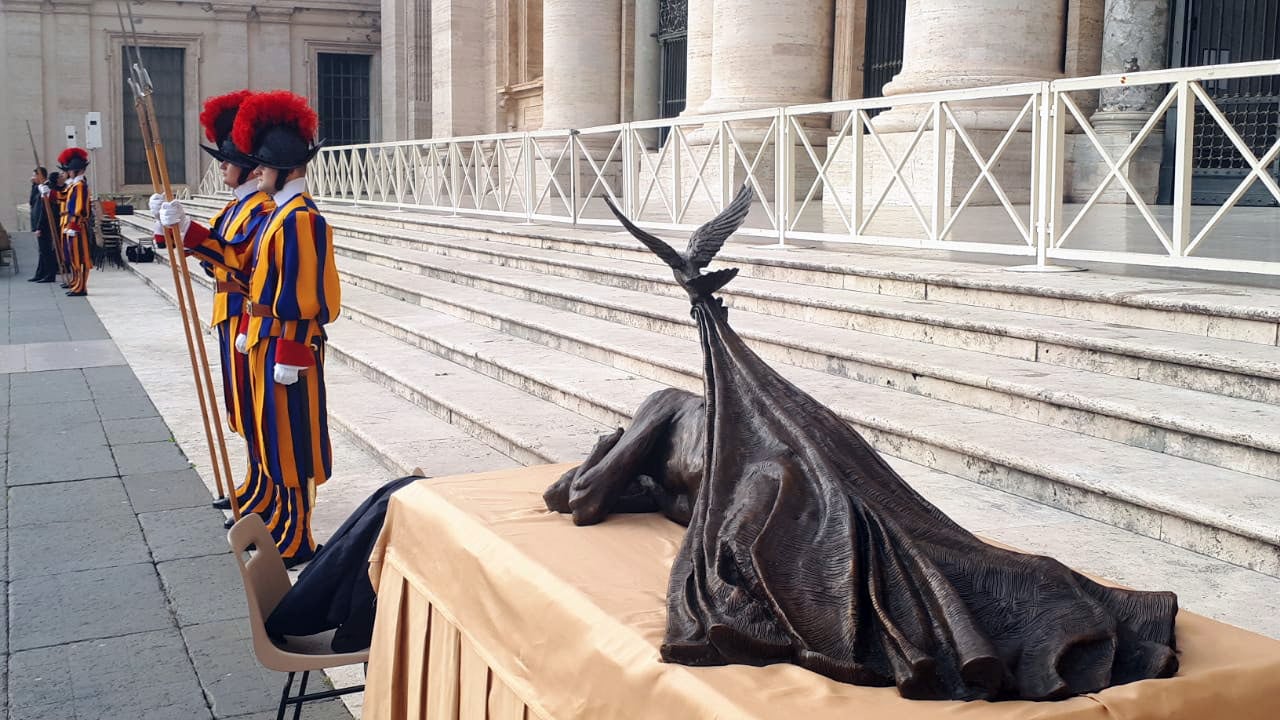 The ‘Sheltering’ sculpture at the Vatican. Photo courtesy of Timothy Schmalz

Over his 25-year career, Schmalz has created numerous statues that are installed in dioceses, learning centers and churches around the world. The Bible, he said, has been “the endless well” of his creativity, inspiring his smaller works as well as his more ambitious, large-scale projects.

“Homeless Jesus” — which depicts a life-size man asleep on a park bench covered almost completely by a blanket, except for his feet which reveal punctured flesh — was Schmalz’s first artwork to appear in Rome, installed in 2016 in the courtyard of Sant’Egidio, in front of the Office of Papal Charities. A similar statue, of Jesus appearing as a shrouded beggar recognizable only by his stigmata, or crucifixion wounds, was installed at the Vatican in 2017.

In “Sheltering,” Schmalz said, he chose not to feature Jesus but instead to make “the Holy Spirit the hero of the sculpture.”

“I didn’t want Christianity to get in the way of the Christian message,” he said, explaining that the dove, as a universal symbol of peace and spirituality, could be more approachable to non-Christians.

While homeless people and birds are common sights in cities, he said that bringing the two together offers a message that usually escapes urban dwellers, often buried in their phones. “The actual homeless person is not shocking people,” Schmalz said, adding that if his sculpture can capture the increasingly volatile attention of people, “then it’s a great use of artwork.”

While envisioning the artwork, Schmalz said he imagined it to be viewed looking down, the way many homeless people are seen by passersby. He said he was surprised when the sculpture was presented “triumphantly” to Pope Francis on a pedestal in St. Peter’s Square.

Different interpretations, he said, “allow the sculpture to be a gateway to that spirituality and lead people to action.”

Pope Francis has been a source of inspiration and creative energy for Schmalz, especially for the pope’s ability to attract both Catholics and non-Catholics. “My creativity is really influenced by having such a radical pope for a radical faith,” he said. 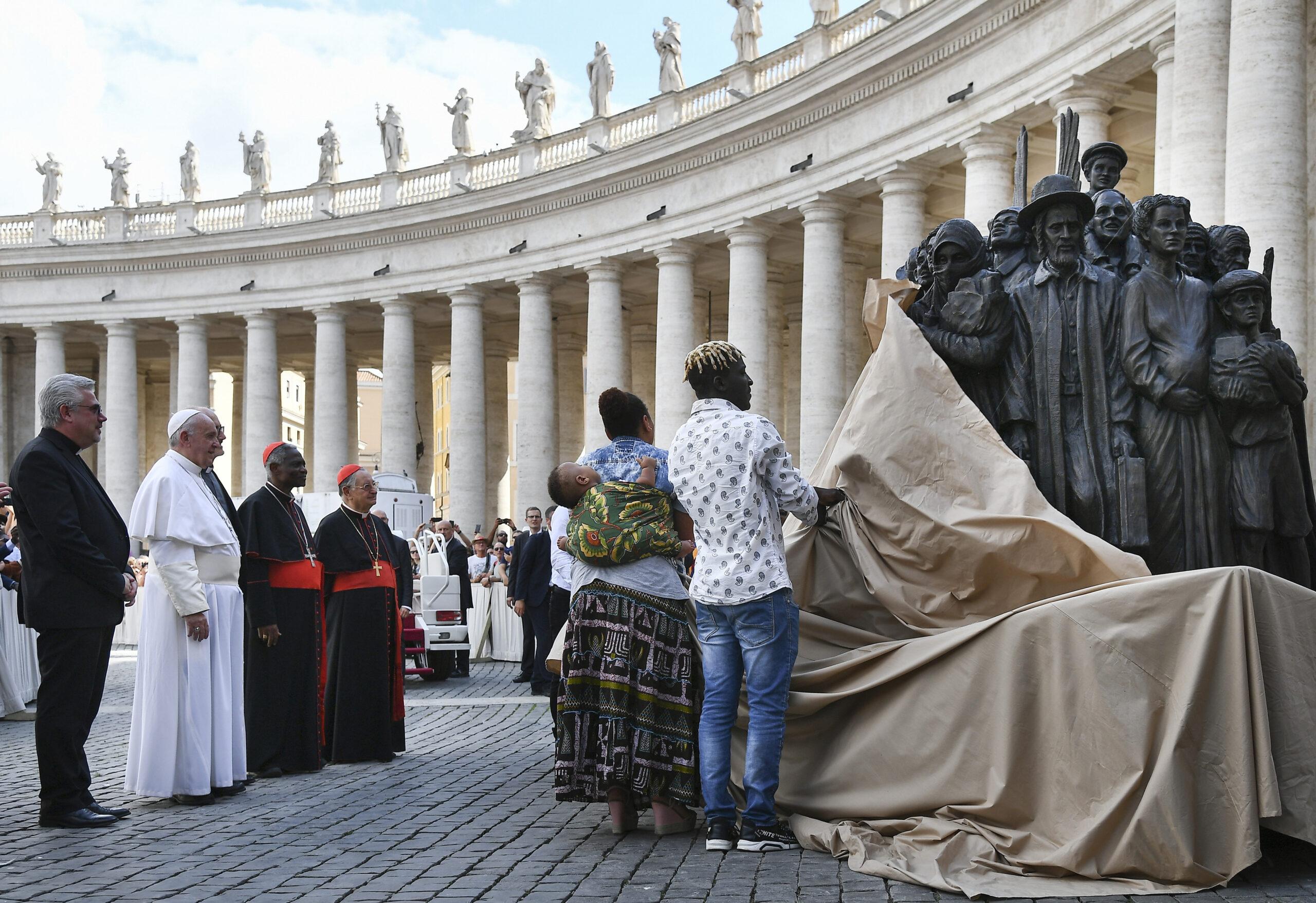 Pope Francis, left, watches the unveiling of the new sculpture “Angels Unawares” on the occasion of the Migrant and Refugee World Day, in St. Peter’s Square, at the Vatican, on Sept. 29, 2019. (Vincenzo Pinto/Pool Photo via AP)

Schmalz’s previous work depicting the plight of migrants and refugees, ‘Angels Unawares,’ was also dedicated by the pope in 2019 and became the first sculpture to be installed in St. Peter’s Square since its completion by the Renaissance artist Gian Lorenzo Bernini 400 years prior.

“Creating sculptures that are visual ambassadors to the motivations that this pope has is phenomenal,” he said.

Schmalz’s artwork isn’t just a representation of Pope Francis’ vision, he said, but also of the gospel and Christian charity. “Sheltering” is sponsored by the Vincentian Family, a global network of lay and religious organizations and charities inspired by St. Vincent de Paul, the 19th-century priest known for his dedication to the poorest in society.

Through the FamVin Homeless Alliance, the Vincentian Family hopes to provide housing for 10,000 people around the globe by the end of 2023 as part of their 13 Houses campaign. So far, the campaign has built 2,311 houses and offered support to 8,643 people in 60 countries.

“This is just the first step in an ambitious plan to change the lives of many of the 1.2 billion people who are currently homeless around the world,” said Mark McGreevy, who coordinates the initiative, in a statement.

“Sheltering” will be placed in several cities all over the world as a symbol of the work done by the Vincentian Family. “A lot of charities in the world decide not to have powerful symbols, to their disadvantage,” Schmalz said, adding that his artwork can act “as the visual ambassador to the scriptural text and those people who promote it and celebrated it.” Having just completed a massive open-air installation inspired by the Catholic poet Dante Alighieri, Schmalz said he is now working on bringing Pope Francis’ green encyclical “Laudato Si” to the masses by translating the text into something that can be read through the eyes.

“We often need a slap — or a reminder — that all human life is sacred, and it is our sacred duty to take care of it,” he said.