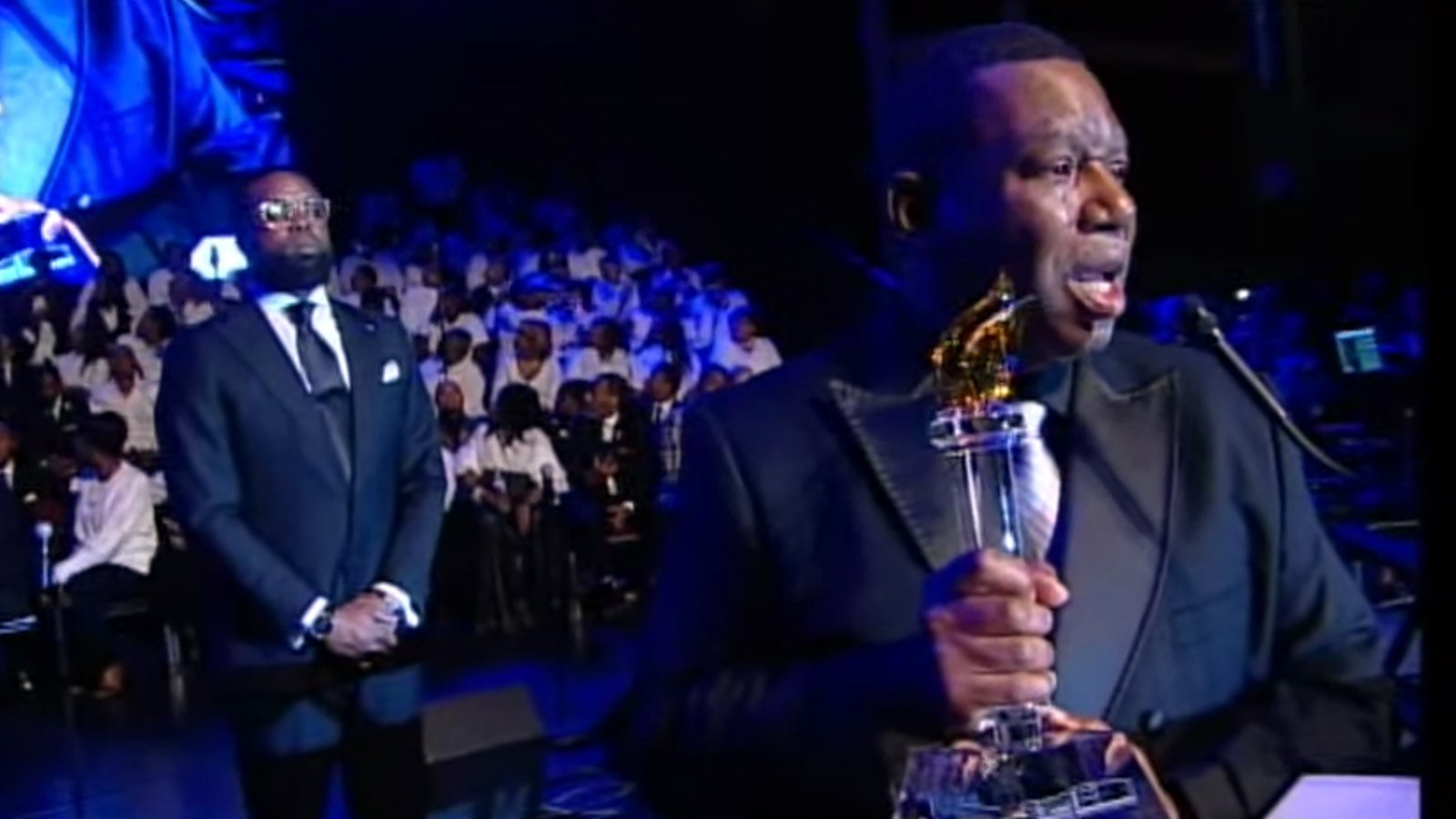 The Rev. James Meeks, right, speaks before passing a ceremonial torch statue to the Rev. Charlie Dates, left, during a Salem Baptist Church service on Jan. 8, 2023, in Chicago. Meeks is retiring after leading the church for 38 years. Video screen grab

CHICAGO (RNS) — The Rev. James Meeks faltered for just a moment at the end.

Standing in the pulpit on Sunday (Jan. 8) at the House of Hope, the home of Chicago’s Salem Baptist Church, Meeks held a glass statue of a torch, which he was about to pass to the Rev. Charlie Dates, who would succeed him as leader of one of the city’s largest churches.

Meeks tarried in prayer for a moment, every eye upon him.

“I’m almost afraid to hand you this because I know the burden that comes with this role,” Meeks told Dates, warning him of sleepless nights and the temptations that come with power and authority.

“And Charlie, the only thing I can tell you is that God’s word will hold you.”

Then Meeks passed the torch to his successor and blessed him — and the church filled with the sound of applause.

Sunday’s two-and-a-half-hour service was a tribute to Meeks’ remarkable four decades as the church’s pastor, which began on a frozen January morning in 1985, with temperatures at 20 below. That year, Meeks and more than 100 former members of Beth Eden Baptist Church, where he had been a pastor for several years, launched a new congregation in a rented building with the aspirational slogan, “The Greatest Church in the World,” the Chicago Tribune once reported.

RELATED: The church will not be silent’: Clergy lead thousands in peaceful protest on Chicago’s South Side

Meeks grew Salem to 15,000 members, with the congregation moving from that rented building to a former Catholic church in the West Pullman neighborhood on the far South Side and later to the 10,000-seat House of Hope, a massive worship center and arena. Congregants mingle at the House of Hope before a Salem Baptist Church service on Sunday, Jan. 8, 2023, in Chicago. RNS photo by Bob Smietana

Known for his passion for teaching the Bible, his evangelistic fervor — the church claims to have baptized 20,000 people during his tenure — and his passion for education and economic justice, Meeks has wielded spiritual and public influence in the city, serving for a decade as a state senator and running twice (unsuccessfully) for mayor.

During his tenure, the church helped shut down dozens of liquor stores, turning one into a Christian bookstore. The church has held funerals for victims of gun violence, promoted education, pushed for gun-control legislation and worked for the spiritual and economic thriving of its community. As a state senator, Meeks was most known for his efforts to improve funding for local schools.

Sunday’s service reflected both spheres of influence. Meeks’ longtime friend, the Rev. Jesse Jackson Sr., joined a host of other pastors in attendance — a number of former members of Salem who are now pastoring elsewhere stood on the stage. Politicians like U.S. Congresswoman Robin Kelley (D) were also in attendance at the service, which featured video greetings from megachurch pastors TD Jakes and Joel Osteen, as well as a word from Chicago Mayor Lori Lightfoot. The mayor praised Meeks for his role in the community and told worshippers not to worry about the pastoral transition at the church.

“Fear not,” she said, before pulling out a Bible and asking the congregation to read along with her from the book of Deuteronomy about the transition in leadership from Moses to Joshua. 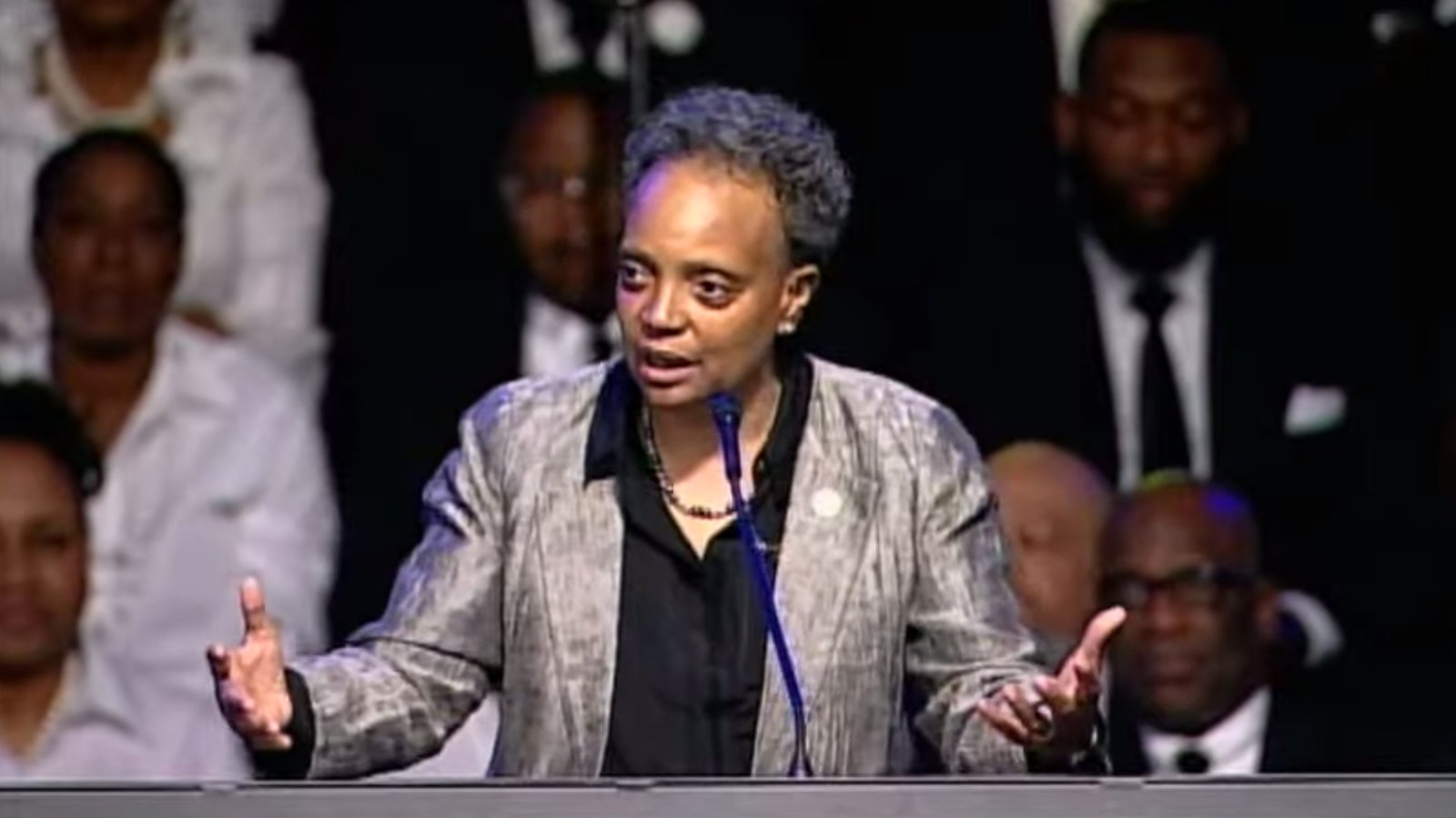 “Pastor, did they really think I was going come up here and talk to this congregation and not know my Bible?” she joked as laughter and smiles filled the room.

Meeks’ family was on hand for the service, including his granddaughter, whom he blessed before starting his sermon, and his 93-year-old mother. The service also included a video tribute to his wife, Jamell, who played a prominent role in the ministry.

The service was filled with music, beginning with an energetic version of “In the Sanctuary,” with gospel composer Kurt Carr and the Kurt Carr Singers, along with a massive choir and the church band. Choir members, the band and the congregation also joined Meeks in a gospel song, repeating the phrase “Do You Remember That Day” over and over before his final sermon began.

Meeks, 66, had initially begun talks about retirement in 2019, but those plans were put on hold after the outbreak of the pandemic. He wanted to step down while he was still in good health and while the church was doing well.

“Sometimes people stay too long,” he said in an interview a few days before his retirement. “I always want to be in a position where I am welcomed back here.” 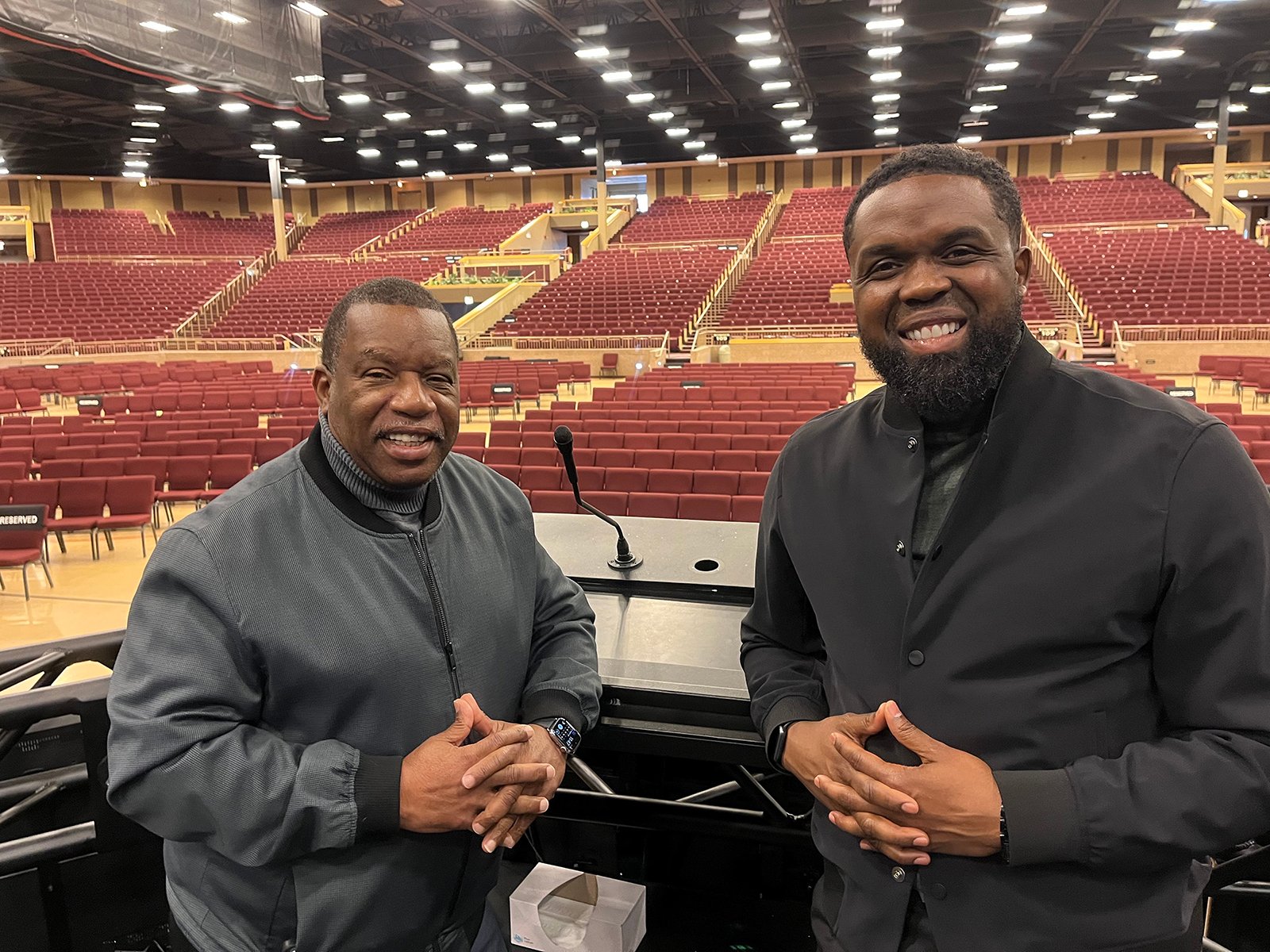 The Rev. James Meeks, left, and the Rev. Charlie Dates meet at House of Hope, the home of Chicago’s Salem Baptist Church, on Jan. 6, 2023. RNS photo by Bob Smietana

Meeks — a Chicago native who first began preaching as a teenager — also felt that a new voice was needed in the pulpit, someone who could take the old messages of the Bible and teach them to a new generation. The country is in a time of great change and upheaval, he said, and people are looking for God.

“I think that people are inquisitive about who God is, ‘How do I meet him? How can I know him?’” he said. “It’s incumbent upon the church, to be able to say, ‘Here God is, this is how you can meet him. This is how you get to know him.’ And I think Charlie is that communicator for our age today.”

For Dates, becoming senior pastor of Salem is a homecoming. He attended the church’s school as a child, first meeting Meeks when he was in the 5th grade. A graduate of the University of Illinois at Urbana-Champaign and Trinity Evangelical Divinity School, he served on staff at Salem in 2011 before becoming pastor, at age 30, of Progressive Baptist Church, a historic Black congregation.

Dates helped revitalize Progressive Baptist and will, for a time, preach at both churches. He said in an interview that there’s a sense of excitement and apprehension in his new role. While Meeks will take some time away from the church — he plans to stay away till at least August — Dates said he hopes to be able to call his mentor for advice and counsel.

He also said he hopes Salem, as a larger congregation, can be a resource to other congregations in the city of Chicago. He told Christianity Today magazine last year that the city needs “the Black church to be her best and brightest self,” something he addressed in an interview with Religion News Service.

“Historically,” he said, “the flourishing of Black people in America, and specifically in Chicago, is tethered to the Black church.” That remains the case, he said.

“The Black church, in particular, has a history of knowing how to help people flourish, how to understand God’s relationship to those who’ve lived in oppression and under oppression, without taking pity or sorrow, but empowering them,” he said. “If there ever were a time where Chicago needed the Black church, man, I think this era is it.” 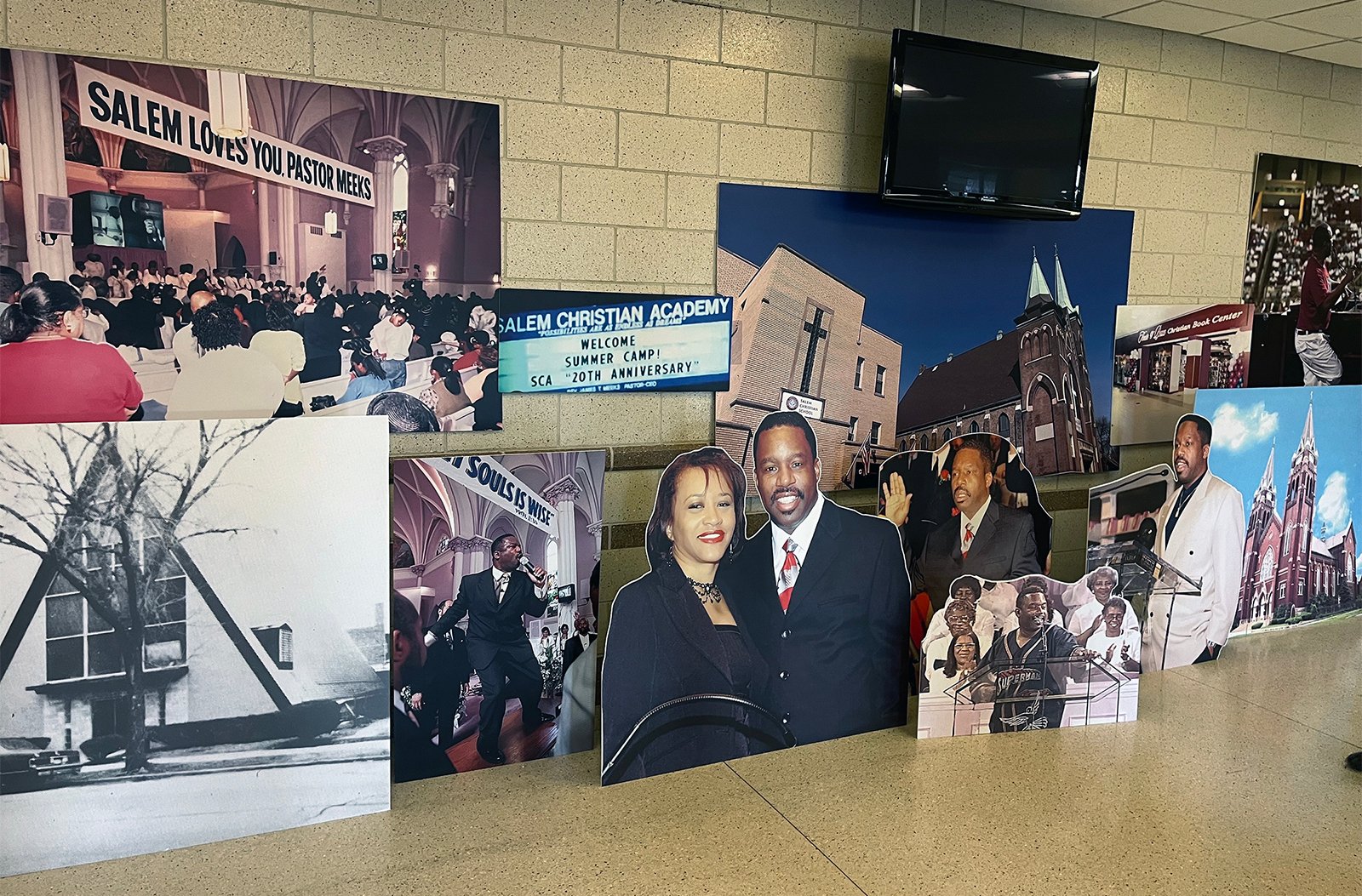 Despite the church’s growth, Meeks remained hands-on as a pastor — visiting the sick, counseling families in crisis and grieving with those who lost loved ones. Those ties with people he loves will be the hardest to give up, said Meeks, who said he had mixed feelings about leaving.

“I’ve always wanted to finish well, and be well when I finished,” he said. “But it is hard to dislodge yourself from people that you love.”

During his last sermon, handwritten like all his others on a yellow legal pad, Meeks referenced the Apostle Paul’s farewell in the book of Acts and how the church in Ephesus wept at Paul’s departure. He would weep, too, at saying goodbye.

Meeks — who pledged to remain at the end of the service until he’d shaken every person’s hand and said every goodbye — recalled the most memorable moments in his ministry: being present in the hospital or the graveside with church members, watching children being born and years later, attending their graduation. Teaching church members the Bible and leading them on what he called his crusade to change the community.

It was alright to cry at goodbye, he told church members.

“Tears are a sign that something meaningful has happened,” Meeks said.

RELATED: We out’: Charlie Dates on why his church is leaving the SBC over rejection of critical race theory