CHICAGO (RNS) — Many of the protesters carried signs with messages inspired by their beliefs:

“The church will not be silent.”

“The Jewish community stands with you.”

Thousands of Chicago’s faithful marched Tuesday evening (June 2) in remembrance of George Floyd and other African Americans who have died as a result of police brutality, systemic racism and injustice. The demonstration was organized by the Rev. Chris Harris of Bright Star Church and other religious leaders from across the city.

Along with signs, they carried bottles of water to distribute as temperatures set record highs for the day in Chicago, as well as boxes of face masks to slow the spread of the coronavirus.

Chicago’s event was just one demonstration led by clergy this week as people of faith take a more active role in the protests sparked by Floyd’s death. The protests have spread from Minneapolis, where he died after a police officer kneeled on his neck for nearly nine minutes, to all 50 states and around the world. 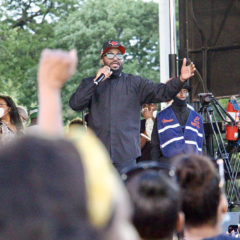 Pastor Chris Harris of Bright Star Church organized the march through Bronzeville on June 2, 2020. “We showed them we can do it peacefully in Chicago,” he said to cheers at a brief rally afterward. RNS photo by Emily McFarlan Miller 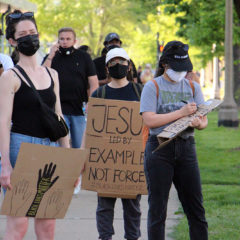 Participants in a Chicago faith community demonstration march through the Bronzeville neighborhood on Chicago’s South Side on June 2, 2020. RNS photo by Emily McFarlan Miller

Thousands joined the march, which traveled down Martin Luther King Jr. Drive in the Bronzeville neighborhood on Chicago’s South Side.

“We expected Chicago to show up. And it did: South Side, West Side, North Side, everybody came, peaceful, no drama,” Harris told Religion News Service afterward.

RELATED: In LA, a rally highlights a divide between clergy on how to bring about police reform

The march began with several interfaith prayers and calls for social distancing near the Monument to the Great Northern Migration, which marks Bronzeville’s history as home to many African Americans who left the South between 1915 and 1970 only to face discrimination in Chicago.

The Rev. James Meeks of Salem Baptist Church of Chicago was among the 18 Christian and Jewish leaders who partnered to organize the event.

Meeks said it was important to have a peaceful march to “get back on message” after other protests have ended in violence. That message: that the police officers who killed Floyd should be arrested and charged with first-degree murder, that complaints against police be made transparent and, in Chicago, that the mayor and police superintendent outline how they will deal with police brutality going forward. 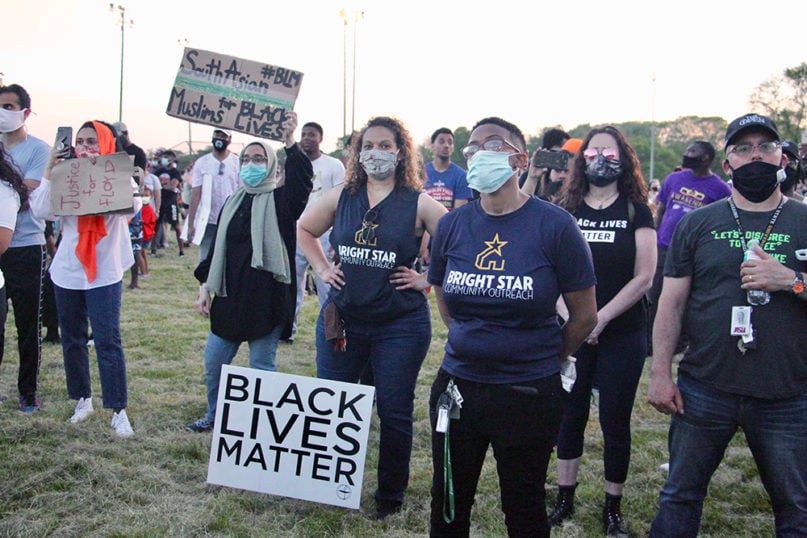 Participants in a Chicago faith community demonstration listen to speakers at Washington Park on Chicago’s South Side on June 2, 2020. RNS photo by Emily McFarlan Miller

It’s important, too, for people of all faiths to come together around that message, said the pastor.

“It’s so important that people of faith put their faith on display,” Meeks said. “The Bible says faith without works is dead, and so we must have some works to go along with our faith.”

Jasmine Meeks, the church’s 30-year-old marketing and communications director, said the congregation has been taking part in marches her whole life. She pointed out the sea of red shirts in the crowd — all from Salem.

“I think there’s something important about unity, not only in the body of Christ, but just in numbers as well — the camaraderie, people get to bring their children and they get to be a part of something,” she said.

A number of marchers came with groups from houses of worship across the city. One small group piled out of a church van from Sunshine Gospel Ministries, which serves children and families in the city’s Woodlawn neighborhood.

Some marched with children; a few, with their pets. 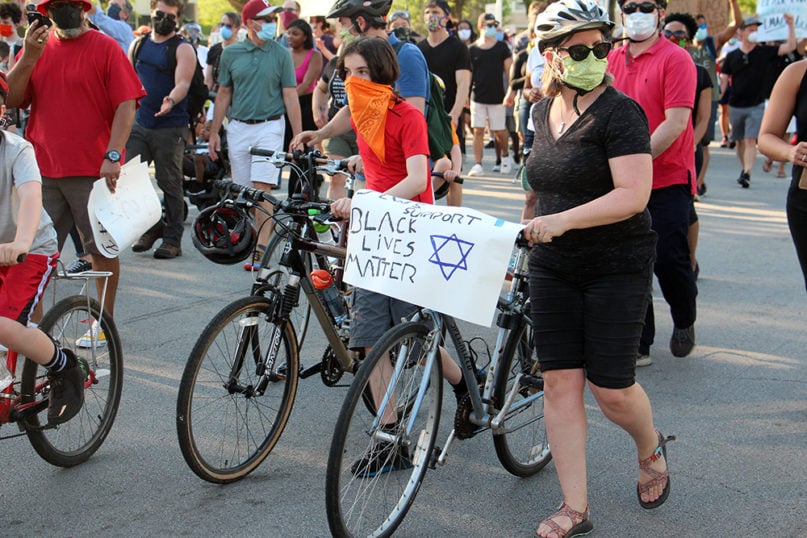 A woman brings a sign that reads ‘Jews Support Black Lives Matter’ during a Chicago faith community demonstration march through the Bronzeville neighborhood on Chicago’s South Side on June 2, 2020. RNS photo by Emily McFarlan Miller

Those unable to walk the 3-mile stretch followed in a caravan of cars and bikes.

Willie Benton, 65, of Beverly joined the march with a group from Trinity United Church of Christ, former President Barack Obama’s Chicago church. Benton wore a black T-shirt with “I can’t breathe” — among the final words spoken by Floyd and Eric Garner, another African American killed in an encounter with police — across the front and the church’s name on the sleeve.

Benton said that he wanted to show solidarity with Floyd and others who have been killed by police brutality and that faith gave him the foundation to do so.

“Christ spoke truth to power,” he said, pointing to the story in Christian Scripture of Jesus flipping tables and driving away people buying and selling things in the temple.

“He’s always spoken out for the oppressed — always, always. And so, being grounded in faith, it gives you the ability to see things the way God sees them and always do right. God always stands on the side of the righteous,” Benton said. 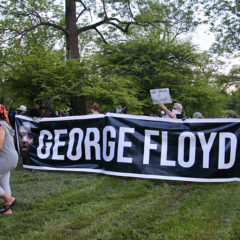 Participants in a Chicago faith community demonstration carry a large George Floyd banner through the Bronzeville neighborhood on Chicago’s South Side on June 2, 2020. RNS photo by Emily McFarlan Miller 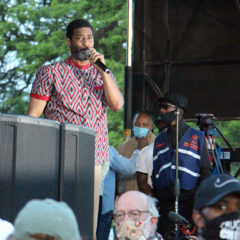 The march paused at several points to pray and to kneel and ended with a brief rally that wrapped up a half-hour before the city’s 9 p.m. curfew.

Hiba Ayub, 23; Omar Jamil, 29; and Ayesha Khan, 23, of Hyde Park joined the rally afterward in the park behind Walter H. Dyett High School for the Arts.

“It was really important for me, personally, to show my solidarity and unity with our black brothers and sisters, not just as a part of my culture, but also as my religion — and also just as a human being,” said Khan, who decided to come to the rally after noticing there were no Muslim leaders among the faith partners leading the event.

“If it’s just one small thing that I can do to help out, then I think it’s important to show up and speak up and continue to educate myself and not put that burden on our black brothers and sisters, because they’ve done that long enough and suffered long enough. I just feel like it’s now or never. How many more things have to happen for us to really open our eyes and start not just being not racist, but being anti-racist?”

Before the crowd members at the park silently bowed their heads in a final prayer, organizer Harris encouraged them to make some noise.

“We showed them we can do it peacefully in Chicago,” he said.