LOS ANGELES (RNS) — Demonstrators sang hymns with Los Angeles police and posed for photos with officers alongside a man holding a large wooden cross with the words “Jesus is Justice and Peace.”

Officers handed out water bottles and took a knee at the protesters’ requests. At one point, protesters in unison chanted the Bible verse “The anointing breaks the yoke!” Christian music blasted through speakers.

Demonstrators then stood in a circle and created a pathway after they were told a special guest would be coming. It was Mayor Eric Garcetti, who took a knee in a symbol of solidarity with the people gathered to protest George Floyd’s death.

“Get off your knee!” one activist shouted. “Defund the police!” others yelled. Demonstrators tried shushing them, annoyed they couldn’t hear the mayor and faith leaders speak.

This was the incongruous scene outside the Los Angeles Police Department headquarters in downtown LA on Tuesday (June 2).

The faith-based rally highlighted different ways clergy and religious leaders are interacting with law enforcement as they seek to end racist policies and police brutality toward black people.

Some religious leaders have stood with police in news conferences to try to dissolve protests that resulted in looting and vandalism, while other clergy have gotten pepper-sprayed in confrontations with officers in protests nationwide.

In LA County, this rally was a stark contrast from the weekend protests, in which law enforcement shot rubber bullets toward demonstrators and journalists. And it took place just a day after LAPD Chief Michel Moore’s controversial comment that people looting were as responsible for Floyd’s death as the Minneapolis police officers were. 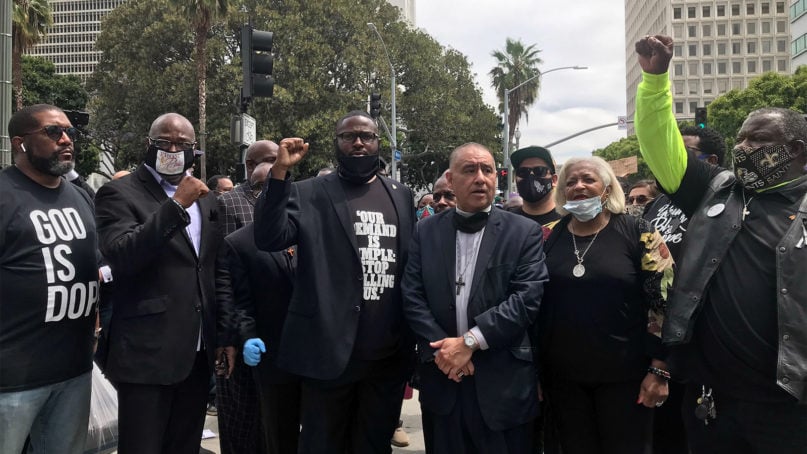 The Rev. K.W. Tulloss, third from left, of the Baptist Ministers Conference of Southern California, poses for a photo with other faith leaders outside of the Los Angeles Police Department headquarters on June 2, 2020. RNS photo by Alejandra Molina

The Rev. K.W. Tulloss, of the Baptist Ministers Conference of Southern California, said his group helped organize the Tuesday gathering “as a way for us to return the focus back to George Floyd.”

“When we had all these lootings and individuals that take advantage of certain aspects of peaceful protests, we said we wanted to do it right,” Tulloss said in an interview with Religion News Service.

Tulloss and other faith leaders met with Garcetti for about two hours after the mayor’s appearance, which Tulloss said was unplanned. Tulloss said they spoke about the importance of a city budget that “is not heavily going toward the LAPD and their practices.”

Instead, he said, more money should go toward counseling and homeless programs. He said they asked the mayor to support services that would help heal the community.

“There’s a lot of trauma within our community, and part of the looting and the things that we’ve witnessed the last few days have been because of the trauma of individuals. This is their outlet,” Tulloss said.

“We wanted to make sure that we’re setting the tone of how we should do it, what’s the right way of going about doing it,” Tulloss added.

Pastor Stephen “Cue” Jn-Marie understands people are doing “what they feel they should do,” but he said the demonstration was tone-deaf. He didn’t attend the gathering but voiced his concerns about it on social media. People of faith pray and gather outside of the Los Angeles Police Department on June 2, 2020. RNS photo by Alejandra Molina

“Pastors and preachers are those who are supposed to be comforting people,” Jn-Marie, who founded the “Church Without Walls” in Skid Row, told RNS. “The Scriptures tell us that we are to mourn with those who mourn, rejoice with those who rejoice and, at this time in our city, it’s not a time of rejoicing.”

Jn-Marie is an organizer with Black Lives Matter and has marched with protesters in recent days.

Last week, he and others protested onto the 101 Freeway. He was also at the Black Lives Matter protest on Saturday that, although started peacefully, ended with numerous arrests and tense standoffs with police.

“I think it’s triggering to a lot of people who have endured the trauma of law enforcement in this nation. … At a time when we’re supposed to be dismantling that system of oppression, we’re sitting there taking photos and doing photo-ops and hugging,” Jn-Marie said. “I don’t mind people hugging people, but those officers represent a system.”

The meeting with Garcetti also upset Living Word Community Church pastor James Thomas, who was at the rally.

“I love my brothers. I love God. I love the church, but if they cannot understand what is happening out here in this street, there is something wrong with them,” Thomas said through a loudspeaker while faith leaders were inside with the mayor.

To some activists, Garcetti is associated with a police brutality problem that local Black Lives Matter activists say does not just exist in Minneapolis. 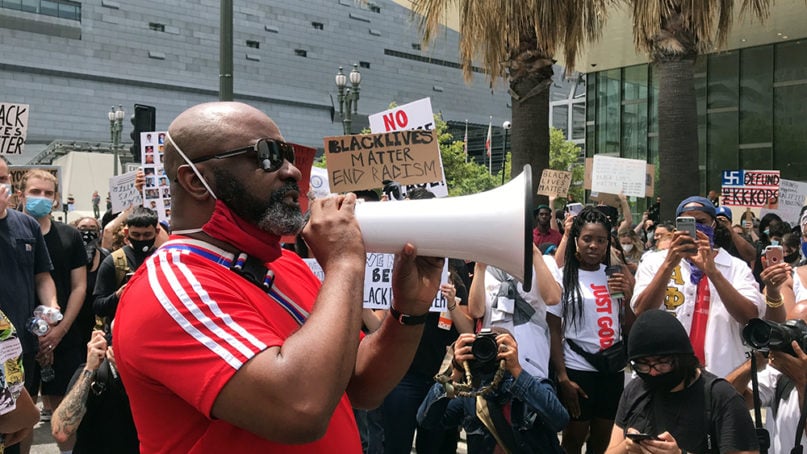 In recent days, Black Lives Matter-Los Angeles activists have highlighted in news media interviews and in protests that 601 people have been killed by police in LA under the administrations of Garcetti and District Attorney Jackie Lacey.

On Tuesday evening, Black Lives Matter activists peacefully protested outside of the mayor’s house demanding city resources be pulled away from the police department. Black Lives Matter-Los Angeles has been advocating for the People’s Budget, a plan for the city that would focus on housing, mental health and public health.

To Thomas, the Christian thing to do would be to stand with the people — not with the system perpetuating the problem.

“A whole lot of people talk about God, but that doesn’t mean they know him because if you know him you would be on the side of the people like he was,” he told people at the rally.

“Don’t believe that all Christians think alike because this one is interested in doing what God did, and that is he sacrificed for all of us,” he added.

Robert Honeycutt, pastor at Great Shepherd Outreach, said he understands Garcetti, as a politician, is walking a tightrope.

“Like it or not, he represents everybody,” Honeycutt said. “He can’t just choose a side, but what he has to do is choose justice.

To Tulloss, people of faith “shine a light on dark situations.”

“I do understand that there are some faith leaders that are connected to different causes, but we are the real cause,” he said. “We are the pulse of our community.”