The rhythm of the call and response chant was a simple one.

It was only a few minutes, though, before a handful in the crowd of Brooklyn protesters mirrored the cadence, but substituted choice curse words of their own.

“That’s not our movement!” a bystander in the crowd shouted. “Our movement is love. God is love!”

Organized by The Bridge Church, a 6-year-old ethnically diverse congregation in downtown Brooklyn, the “Prayerful Protest” saw several thousand people from more than 80 New York City churches gather on Tuesday evening (June 2) in Brooklyn to march peacefully in support of Black Lives Matter, and in response to the deaths of George Floyd and Breonna Taylor at the hands of police.

“Peaceful” was a critical word for the organizers.

“I think Christians want to protest, but I think they’re confused about how to protest because right now it’s been marked as ‘violent,’” organizer James T. Roberson III told Religion News Service in an interview before the march. “We are angry and we believe God is angry too. But because we are looking toward God, we are not seeking retribution by seeking violence.” 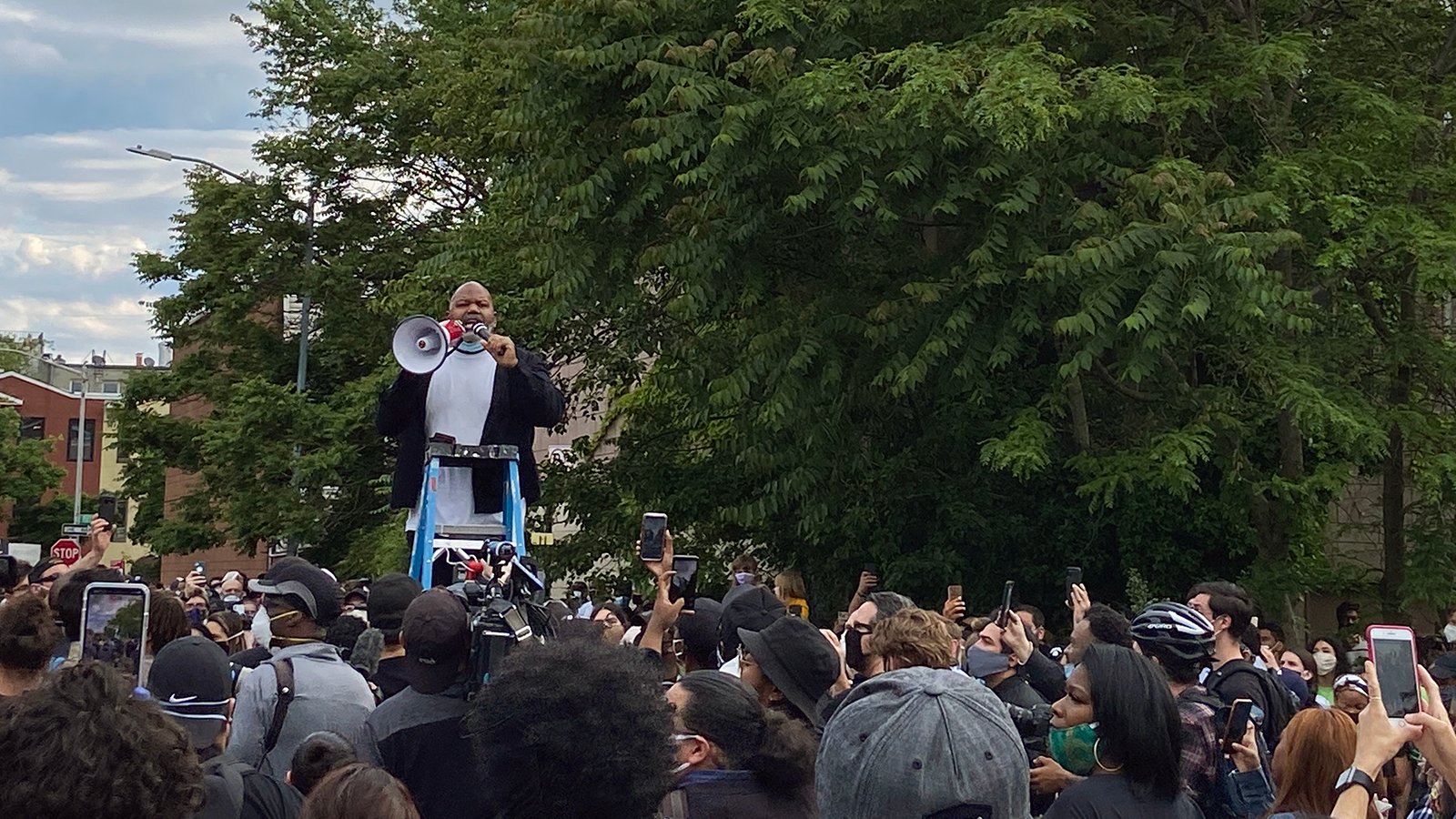 Roberson, the lead pastor at Bridge Church NYC, said Christians need to own the act of protesting. “We are Protestant Christians, after all,” he said, emphasizing the first two syllables of the word. “We are countercultural by nature. We are protesting systems, principalities, powers in the world. A protest is just a physical way of embodying the way we operate spiritually anyway.”

He said the idea for the march initially came from his friend Justin Mattera, lead pastor at Zion Church in Bay Ridge Brooklyn. Roberson described Mattera, who also runs a coffee shop and a marketing company, as a “networker and mobilizer.” 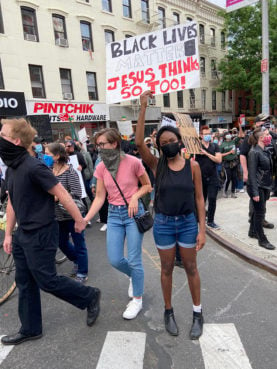 A demonstrator holds a sign that reads “Black Lives Matter, Jesus Thinks So Too!” in Brooklyn, New York, on June 2, 2020. RNS photo by Roxanne Stone

Roberson, though, was less than enthusiastic about taking part in the march when Mattera first pitched him on it.

“I’m tired. Trying to understand life as a black man,” Roberson said. “But then once I put the phone down, there came kind of a ‘God moment,’ where I was like, why not us?”

He called some friends and colleagues and within 20 minutes, Roberson said, several other pastors and churches in his network had already agreed to join as well.

“I think a lot of churches wanted to do something,” he said. “But they wanted to make sure black people were out in front.”

The march began outside Bridge Church and Roberson addressed the demonstrators before releasing them.

He emphasized that this protest was a peaceful one.

“The goal is to bring attention to a cause by disrupting a city,” he told them. “We want to bring a blessing to the city.”

Even as Roberson spoke, other protest groups could be heard shouting on neighboring streets. A helicopter circled overhead. The march made its way through both residential and business streets in Brooklyn and ended in front of Barclays Center in time for protesters to get home before the citywide 8 p.m. curfew.

Protesters in the march carried signs ranging from the overtly religious — “Black Lives Matter! Jesus Thinks So Too” and “I Can’t Breathe — Jesus” — to the decidedly confrontational “Blue Klux Klan.”

RELATED: In LA, a rally highlights a divide between clergy on how to bring about police reform

Church logos could be seen emblazoned on shirts throughout the crowd — as well as on face masks. A few clergy were present among the predominantly evangelical groups of marchers.

“I felt a moral urgency with the manner of Floyd’s death,” said Abraham Cho, a pastor at Redeemer Presbyterian Church – East Side, who marched with other members of his church. “I’m frustrated by Christians finding ways to avoid the heart of the issue — violence against black people by police. Something needs to change and I felt a moral responsibility to be part of it.” 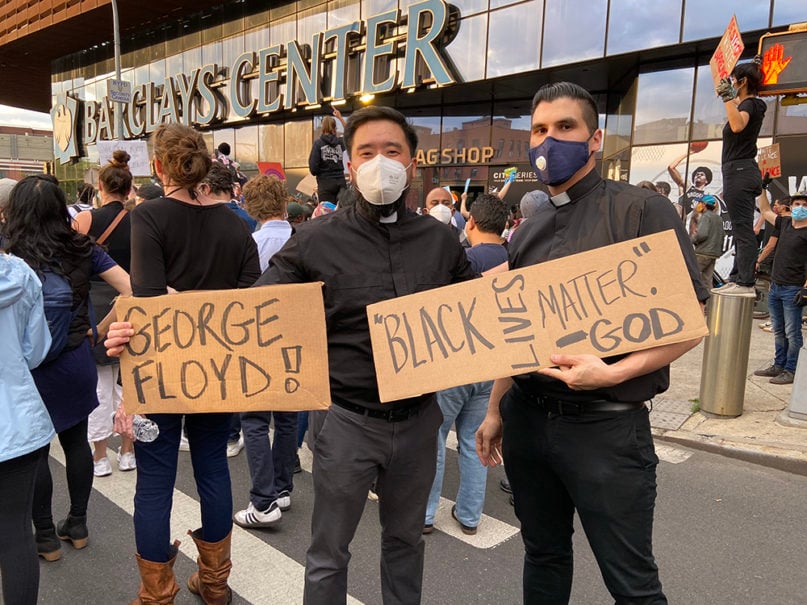 Pastors Abraham Cho, left, and Justin Adour, both of Redeemer Churches and Ministries, participate in the “Prayerful Protest” in Brooklyn, New York, on June 2, 2020. RNS photo by Roxanne Stone

The march ended, as planned, outside Barclays Center. The shops nearby, including a Warby Parker glasses store and a Chick-fil-A, were boarded, a sign that not all of the recent protests had been as uneventful as Tuesday night’s was.

“If you’re with the church protests, it’s time to go home,” one organizer shouted into a bullhorn as the crowd began to break up.

Some heeded that advice and headed home. Others mingled with different protest groups that planned to keep going after curfew, despite the increased presence of the New York Police Department. Roberson hoped the impact of the protest would linger on, even after all the crowds had dispersed.

“I’m not just trying to look at policies, or platforms or politics,” he said. “I’m trying to reconstruct the narrative of the black man and woman in America. That might take a lifetime, but that’s why we’re protesting.” 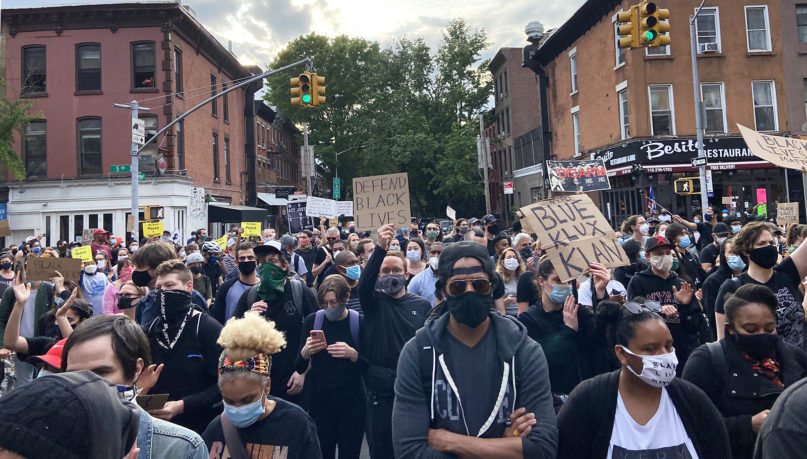