Dr. William Baker of the Bernard L. Schwartz Center for Media, Public Policy, and Education at Fordham University hosts each episode, diving into the top religion stories of the week with a new featured guest. Together, Dr. Baker and his guest explore topical issues and fundamental questions that arise from today’s religion landscape. This podcast seeks to build a forum for the balancing of ideas that can be trusted by the faithful and the agnostic alike.

Developed in partnership with Religion News Service, Beliefs’ episodes range from 12-20 minutes each. Beliefs intends to reach communities beyond those normally covered and served by mainstream media. By exploring the world of religion in a sympathetic and secular way, the podcast will be accessible and relevant to those who don’t adhere to particular religious doctrine. 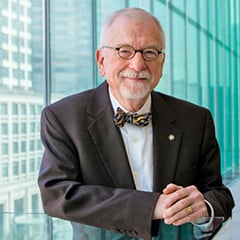 During his 21-year tenure as president of WNET in New York, America’s flagship public broadcaster, Baker fortified its existence with the development of one of the first — and then largest — endowments in the history of public broadcasting, and presided over its heyday as the pre-eminent producer of arts, nature, biography and public affairs programming in the nation.

As a commercial broadcaster, Baker helped start many cable networks, launched Oprah Winfrey as a talk show host, and was involved with the early stages of launching both the Discovery Channel and the Disney Channel. He was president of Westinghouse Television and Chairman of Group W Satellite Communication for a decade.

Baker is the recipient of seven Emmy Awards, two Columbia DuPont Journalism Awards, and three Gabriel Awards for programs in religion. He is the executive producer of the theatrical films and PBS documentaries, The Face: Jesus in Art and Picturing Mary. He helped launch the 20-year run of Religion & Ethics Newsweekly on PBS. Baker is Executive Producer of the film SACRED which was released worldwide in theaters and festivals in 2017 and runs on PBS in December, 2018. He is co-author of the book Leading with Kindness (American Management Association, 2008) and hosted the series of the same name on public television. Baker is also the co-author of Every Leader is an Artist (McGraw-Hill, 2012), and Down the Tube: An Insider’s Account of the Failure of American Television (Basic Books, 1998). His latest co-authored book is The World’s Your Stage (Amacom, 2016) for performing artists along with three other books.

Baker holds a B.A., M.A. and Ph.D. in Communications Sciences and Organizational Behavior from Case Western Reserve University, and nine honorary doctorates. He was chairman of the National Park Service Advisory Board. His interests include astronomy, horology, and polar science, and he is believed to be the eighth person in history to have stood on both the North and South Poles.