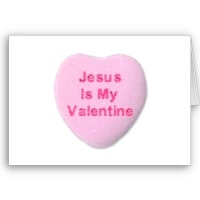 Happy St. Valentine's Day, folks. Did you know there were actually more than a dozen early Christian martyrs named Valentine? Not much is known about the man whose feast day falls on Feb. 14. We can blame Chaucer for many of the legends surrounding the mystery man and for weaving romance into the holiday.

Of course, the V-day is not welcome in some parts of the world, and I'm not just talking about singles bars. In India, a Hindu political party burns Valentine's Day cards. Saudi Arabia has banned the holiday and told stores to remove red items. Malaysia warned its citizens that celebrating the holiday is a "trap" that could trigger indecent behavior. I believe some people call that "getting lucky."

Oddly, supporters of the Pakistani man who confessed to killing a liberal governor over the country's blasphemy law wished the admitted assassin happy V-day with flowers and cards. In Iraq young people are holding a Valentine's Day rally to urge their leaders to love the country instead of robbing it blind.

Unitarians stateside are trying to shift the focus of V day from romantic love to loving one's neighbors. Some Catholics in Chicago are protesting for the rights of gays to marry. Muslims in Queens are trying matrimony speed-dating with their parents cheering from the sidelines. Christians are signing ketubot, traditional Jewish marriage contracts.

Britain plans to allow same-sex unions to be celebrated in houses of worship, according to English newspapers.

Longtime Billy Graham sidekick George Beverly Shea won a lifetime achievement award at the Grammy's last night. The Soweto Gospel Choir and Gyuto Monks of Tibet lost out on the Best Traditional World Album award to the late Malian master Ali Farka Toure. There's a new book on "The Gospel According to Bob Dylan." He sang "Maggie's Farm" last night at the Grammys with some whippersnappers who weren't a gleam in their parents' eyes when ol' Bob wrote the song.

The NYT looks at why Egypt doesn't necessarily have to follow Iran into Islamic theocracy. Coptic Christians in California are overjoyed and relieved that Hosni Muburak was ousted last Friday.

The archbishop of Philadelphia released a video to parishioners expressing "sadness and distress" for the sex abuse charges lodged against four priests last week, including the former vicar for clergy. The vicar for clergy in Los Angeles has resigned after allowing an abusive priest back into ministry. The NYT has a long piece on the toll Ireland's sex abuse scandal has taken on the church and its members.

House Speak Boehner said he "takes (Obama) at his word" that the president is a citizen and a Christian, but that it's not his job to dissuade the doubters. Rep. Ron Paul won the straw poll at CPAC over the weekend, where social issues took a back seat.

The Episcopal and Moravian churches celebrated their full communion agreement on Sunday.

Pope John Paul II's former secretary is giving papal relics - including a drop of JP2's blood - to a Polish race-car driver who is recovering from a serious crash.