(RNS) The Obama administration on Friday (Feb. 1)  sought to placate religious groups by broadening religious exemptions and giving faith-based organizations more room to maneuver around its controversial contraception mandate, but the new rules offer no loopholes for privately owned businesses.

The contraception mandate, part of Obama’s health care overhaul, had set off an explosive church-state dispute and soured relations between the White House and some Christian groups, including the Catholic bishops’ conference. 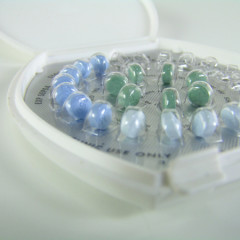 The Obama administration on Friday (Feb. 1) sought to placate religious groups by broadening religious exemptions and giving faith-based organizations more room to maneuver around its controversial contraception mandate, but the new rules offer no loopholes for privately owned businesses. RNS photo courtesy Shutterstock.com. *Note: This image is not available to download.

The new rules, issued by the Health and Human Services Department, seek to address religious freedom concerns in two ways: First, they broaden the definition of “religious employers” so that all houses of worship and dioceses and affiliated organizations will be clearly exempt. Second, for other faith-based employers, the rules would transfer the costs and administrative tasks of the birth control insurance policies to insurance companies.

When the rules were first issued in early 2012 religious leaders and religiously affiliated hospitals and universities, mainly operated by Catholics, objected that the definition of what constituted an exempt religious organization was far too narrow.

That original HHS definition said that in order to qualify as a religious employer who would not have to provide free contraception insurance an entity would have to be a nonprofit that had “the inculcation of religious values as its purpose” and primarily employed and served co-religionists.

Religious leaders noted that churches often employ people not of their faith and their social services welcome anyone, regardless of religious beliefs. As a result they said they feared that church-run soup kitchens as well as dioceses and religious schools could be subject to the birth control mandate.

The new proposals reflect those concerns by eliminating the original definition and using the standard definition of “religious employer” as found in the IRS tax code — the solution that religious leaders were seeking.

The proposals issued Friday also try to clarify how other faith-based organizations that are not exempt could avoid directly providing contraceptive insurance coverage.

If the faith-based organization is self-insured — a problem that was the focus of objections after the first round of proposals last year — then the eligible organization would notify a third-party administrator to work with the health insurer to provide separate policies at no cost, according to the HHS.

“The costs of both the health insurance issuer and third party administrator would be offset by adjustments in Federally-facilitated Exchange user fees that insurers pay,” said the HHS.

In March of last year the administration first issued new rules that addressed some concerns, but not all. The White House pledged to revisit the regulations but a growing number of religious groups– as well as private companies whose owners claimed a moral objection to providing contraceptive coverage — sued the federal government.

Those suits have met with mixed results in the lower courts and the issue appears headed for a Supreme Court review later this year.

The new regulations might make some of those lawsuits moot.

The approach proposed by the HHS on Friday could refocus complaints from threats to the religious freedom of houses of worship and faith-based institutions — such as Catholic hospitals and universities — to claims that for-profit businesses should be exempt from providing insurance policies that they find morally objectionable.

Many of the administration’s long-standing opponents immediately dismissed the new proposals and vowed to press ahead with the lawsuits.

Kyle Duncan, general counsel for the Becket Fund for Religious Liberty, which has represented a range of religious institutions and business owners in court challenges to the mandate, called the proposed changes “radically inadequate” and “extremely disappointing.”

Matt Bowman, senior legal counsel at Alliance Defending Freedom, said: “The administration’s narrow gesture does nothing to protect many faith-based employers or religious families from the unconstitutional abortion pill mandate. The government has no business putting religious freedom on the negotiating table, or picking and choosing who is allowed to exercise faith.”

Yet other foes of the birth control mandate appeared to view Friday’s proposals as a potential resolution, or at least a way forward — an indication that the administration’s concessions may split the opposition.

Cardinal Timothy Dolan of New York, president of the U.S. Conference of Catholic Bishops, said the bishops “welcome the opportunity to study the proposed regulations closely” and said the hierarchy would provide a more detailed reaction later. But speaking privately, church sources close to the bishops said they were “optimistic” that the new rules signaled a path out of what had appeared to be a dead-end argument.

Even William Donohue, head of the Catholic League and a vocal opponent of the White House’s policies, welcomed the birth control proposals as “eminently good sense” and called them “a sign of goodwill by the Obama administration toward the Catholic community.”

“The rules proposed today by HHS appear to go a long way toward rectifying the most problematic provisions of the mandate,” Donohue said. “Essentially, the rules provide insularity for Catholic institutions: they will not be directly involved in providing health insurance coverage for contraception, sterilization and abortion-inducing drugs.”