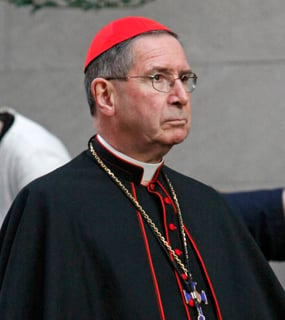 (RNS) The quake that hit Los Angeles last Thursday (Jan. 31) was an ecclesiastical one, but still pretty earth-shaking for the Catholic Church: After the release of thousands of secret personnel files detailing decades of sexual abuse of children by clergy, Archbishop Jose Gomez publicly rebuked his predecessor, Cardinal Roger Mahony, and stripped him of his official duties.

But here's the question: Did anything really change for the embattled cardinal? 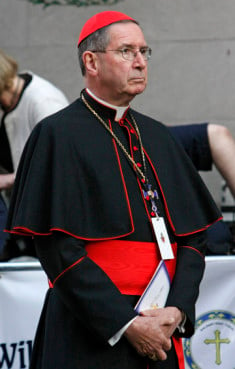 “The behavior described in these files is terribly sad and evil,” Gomez said in a statement, adding: “Effective immediately, I have informed Cardinal Mahony that he will no longer have any administrative or public duties.”

(Gomez also announced that Auxiliary Bishop Thomas J. Curry, a longtime aide to Mahony who was deeply involved in the cover-up, had resigned his position overseeing the Santa Barbara region.)

Much of the information in the files was known or suspected, but the archdiocese had waged a lengthy and contentious legal battle to keep ugly details of the cover-ups secret. The church lost, and the 12,000 pages of documents graphically demonstrated how Mahony, who headed the Los Angeles archdiocese from 1985 to 2011, sought to conceal the abuse from authorities.

A response from Gomez, who was sent by Pope Benedict XVI to relieve Mahony in 2010, was inevitable. But such an action against such a high-ranking prelate -- taken by his own successor no less -- was “unprecedented,” as several media outlets put it.

Some wrote that Mahony was “barred from public ministry,” the term used for the action taken against priests credibly accused of molesting children. It's a severe penalty that means they cannot celebrate Mass in public or wear clerical dress or even present themselves as a priest.

Gomez, a conservative associated with Opus Dei, was widely praised for his courage, even by church progressives who would normally have been allies of Mahony’s. The prevailing wisdom was that Gomez’s response was an indication that at least part of the hierarchy had turned a corner in policing its own culpable members.

In hindsight, however, it's not clear if anything changed for Mahony, or that this was anything more than a spitting contest between two high-ranking churchmen.

The first indication that Gomez’s pronouncement was less than it first appeared was a clarification early Friday morning by longtime archdiocesan spokesman Tod Tamberg in response to initial news reports. He noted that as a retired archbishop, Mahony in fact had no administrative duties, so Gomez’s injunction on that score had no teeth. Indeed, canon law explicitly says that a cardinal’s authority is universal and cannot be curtailed by any bishop except the pope.

Tamberg also noted that Mahony remained a “priest in good standing" and that his day-to-day activities would not change. The cardinal would not be presiding at confirmation rites, Tamberg said, but as one local priest put it, confirmations are not popular tasks so “this is hardly a severe punishment!”

At the same time, in Rome, the Vatican’s spokesman, the Rev. Federico Lombardi, seemed to distance the pope from the battle in America's largest archdiocese. Lombardi told reporters that the issue was being handled by Gomez, and that anything Gomez did would not affect the “other duties assigned by the pope to Cardinal Mahony in the Curia.”

In other words, Mahony, who turns 77 later this month, would still be eligible to vote in a conclave for a new pope, and as a cardinal would still be considered a "prince of the church" and a top adviser to the pontiff.

A few hours later, Mahony himself upped the ante by publishing on his personal blog a sharply worded private letter that he had sent to Gomez, defending his track record and pointedly writing that Gomez had known everything about the secret documents for three years and never took any action until they became public last week.

By late Friday, Gomez was forced to issue a statement under his own name stating that Mahony – as well as Curry – remained “bishops in good standing in the Archdiocese of Los Angeles, with full rights to celebrate the Holy Sacraments of the Church and to minister to the faithful without restriction.”

Gomez is still being praised for his original statement, but church insiders have quietly been expressing dismay at how the episode unfolded. Others are arguing that Mahony -- a media-savvy churchman and an early adopter of digital technology -- appears to have outmaneuvered Gomez on this one.

More than anything, that may show that Mahony's influence, like his ecclesiastical authority, is undiminished.

As Los Angeles columnist and longtime Mahony critic Steve Lopez put it: “A priest in good standing? What in the world do you have to do to fall out of favor?”

Related Posts
By Claire Giangravé
Vatican Museums used to be an overcrowded ‘hell,’ say tour guides. COVID-19 may change that.
By Alejandra Molina
We have a story to tell: Indigenous scholars, activists speak up amid toppling of Serra statues
By Nicole Winfield
Vatican prosecutors seize data from St. Peter’s Basilica
By Alejandra Molina
Who is Junipero Serra and why are California protesters toppling statues of this saint?
By Claire Giangravé
With new document, Vatican implements practical steps for environmental sustainability