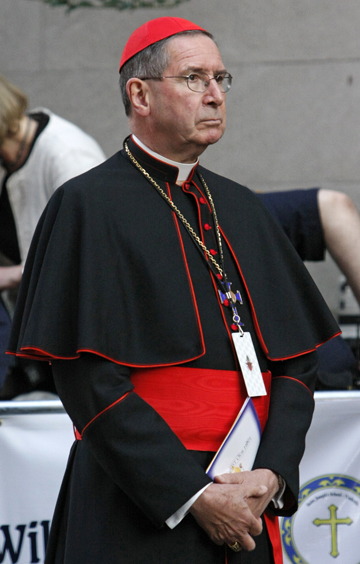 (RNS) Retired Los Angeles Cardinal Roger Mahony was relieved of all public and administrative duties for his role in the clergy sex abuse scandal. RNS photo by Gregory Shemitz.

(RNS) Retired Los Angeles Cardinal Roger Mahony has been stripped of his official duties in an unusual public rebuke by his successor that followed the release of thousands of pages of internal church documents showing how Mahony and aides for years conspired to cover up the sexual abuse of children by clergy.

The current archbishop of Los Angeles, Jose Gomez, also announced late Thursday (Jan. 31) that Auxiliary Bishop Thomas J. Curry, a longtime aide to Mahony who was deeply involved in the cover-up, had resigned his position overseeing the Santa Barbara region.

“I find these files to be brutal and painful reading. The behavior described in these files is terribly sad and evil,” Gomez said in a statement.

Gomez issued his statement after the archdiocese lost a long legal battle and posted on its website personnel files for 122 priests who were accused of molesting children.

“There is no excuse, no explaining away what happened to these children,” Gomez said. “The priests involved had the duty to be their spiritual fathers and they failed.”

Gomez noted that Mahony had apologized for his role in concealing the abuse and allowing it to continue, but he indicated that was not sufficient – and that he ordered Mahony’s removal from public ministry.

“Effective immediately, I have informed Cardinal Mahony that he will no longer have any administrative or public duties,” Gomez said. He added that Curry had requested to resign.

“This is unusual and extraordinary,” said the Rev. Thomas Reese, a Jesuit priest and political scientist at Georgetown University. “An archbishop has never before restricted the ministry of his predecessor and publicly taken him to task like this.”

Mahony did not seem to appreciate the move. On Friday morning on his personal blog, the cardinal posted a private letter he had sent to Gomez in which he explained and defended his track record on abuse. Mahony pointedly noted that Gomez had known everything about the archdiocese’s efforts on abuse since arriving in 2010 as he prepared to take over from Mahony.

“Not once over these past years did you ever raise any questions about our policies, practices, or procedures in dealing with the problem of clergy sexual misconduct involving minors,” Mahony concluded.

Reese said that Gomez’s censure of Mahony shows that “the abuse crisis is now having consequences not just for the abusing priests but also for the clerics who did not deal with them properly,” he added.

But victims’ advocates were skeptical of the moves, noting that they came only after the archdiocese lost a five-year legal battle to keep the documents secret or to release only edited versions.

“The lesson here for Catholic staff is clear: if you successfully conceal your wrongdoing, you can keep your job. If, however, you fail, there’s an extraordinarily slim chance you might experience some slight consequences,” said David Clohessy, executive director of the Survivors Network of those Abused by Priests.

“Gomez has had these documents for months and known about Mahony’s wrongdoing long before now. And yet Mahony has continued to be an honored prelate and prince of the church,” said Terence McKiernan, head of BishopAccountability.org, also a leading advocacy group on behalf of clergy abuse victims.

“The difference is that now the people have access to evidence of Mahony’s misdeeds,” McKiernan said. “Sadly, we see the church acting ethically in these matters only when its actions become known.”

Critics also noted that Mahony, who turns 77 later this month, is retired, and Curry, 70, is an assistant bishop with a much lower profile. And Bishop Robert W. Finn of Missouri, who was convicted last September of failing to report a priest suspected of abuse to authorities, has remained in office and unpunished by the church despite his unprecedented guilty plea.

Still, the action by Gomez against Mahony is surprising and nearly unprecedented. Church observers say Gomez must have had clearance from Rome for such a move, and the Vatican’s spokesman, the Rev. Federico Lombardi, said Friday that “the Vatican is aware of the Los Angeles diocese’s latest decisions but this matter is in the hands of the local archbishop.”

But the developments still raise many questions – one being Mahony’s exact standing in the church now.

Under the policies of the U.S. Conference of Catholic Bishops, priests who are credibly accused of abuse are barred from public ministry, which means that even if they are not defrocked they cannot say Mass in public or wear their clerical dress or present themselves as a cleric.

Archdiocesan spokesman Tod Tamberg said that is not the case with Mahony. Tamberg said he “remains a priest in good standing, and a cardinal of the church. He can celebrate the sacraments with no restrictions.”

Tamberg said that Mahony, who lives at a North Hollywood parish, has canceled his schedule of confirmation Masses and is reducing his speaking engagements around the country; Mahony has lectured widely on immigration issues and the future of the church since retiring in March 2011. Mahony remains eligible to vote for a new pope until he turns 80, in three years.

At the Vatican, Lombardi noted that the suspension does not affect the “other duties assigned by the pope to Cardinal Mahony in the Curia.”

Jerry Filteau of the National Catholic Reporter also noted that the church’s Code of Canon Law gives cardinals a privileged position and even says that they are “exempt from the power of governance of the bishop of the diocese in which they are residing.”

“While that law does not clearly exempt cardinals from all decisions on local ecclesiastical activity, it sets an unusually high bar against banning a cardinal from engaging in church activities in the diocese where he resides,” Filteau wrote.

The Los Angeles case inverts some of the usual assumptions about church politics in that Mahony, who was archbishop from 1985 to 2011 and a cardinal since 1991, was known as something of a liberal in the hierarchy, advocating for immigration reform and economic justice issues.

Gomez, on the other hand, is associated with the conservative Opus Dei society and is seen as a loyal defender of orthodoxy.

But Gomez is also a more low-key personality than Mahony, and is widely respected as an honest broker when it comes to issues like clergy abuse. He has also earned a reputation for speaking out about social justice issues.