ST. LOUIS (RNS) The Archdiocese of St. Louis will end its appeal of a court decision that removed its control of a disputed Polish church after a years-long dispute.

In a joint statement issued in response to queries from the Post-Dispatch, attorneys for the archdiocese and St. Stanislaus Kostka Catholic Church said they had resolved their legal struggle.

“The Archdiocese will dismiss its appeal, and the judgment of the trial court is now final,” according to the statement issued Wednesday (Feb. 13). 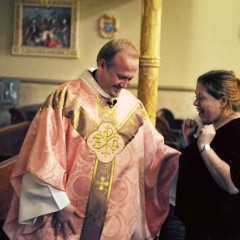 Patricia Darek lets out a small cheer as she talks with the Rev. Marek Bozek following a celebratory Mass at St. Stanislaus Kostka Church in St. Louis, after a judge ruled in the church’s favor in a decade-long dispute between the historic Polish church and the Archdiocese of St. Louis. RNS photo by Erik M. Lunsford / The Post-Dispatch.

As part of the agreement, St. Stanislaus agreed to abstain from representing itself as affiliated with the Roman Catholic Church. Neither side made any payments to the other as part of the resolution, according to the statement. Attorneys said all other terms of the agreement were confidential.

“By bringing this legal dispute to an end, we pray that this will help to initiate a process of healing,” the statement said.

The Rev. Marek Bozek, the former Catholic priest who has led St. Stanislaus since parishioners hired him in 2005 in violation of canon law, said in an interview that he was “glad it’s over and done.”

“This won’t change anything besides making us breathe easier,” he said. “This statement only affirms the status quo of everything we’ve been since December ’05.”

Last March, St. Louis Circuit Court Judge Bryan Hettenbach ruled against the archdiocese in a sweeping decision affirming St. Stanislaus’ ownership of its property. Afterward, Archbishop Robert Carlson vowed to appeal the decision “all the way to the Supreme Court if necessary.”

Carlson declined to be interviewed.

Kathleen Pesha, the archdiocese’s executive director of communications and planning, said in an email that “the lawyers retained by the Archdiocese of St. Louis are handling this matter completely.”

The modern battle between the church and the archdiocese went on for a decade, and the wider tumult is more than a half century old.

The legal battle for St. Stanislaus revolved around a 19th-century agreement with then-Archbishop Peter Kenrick that allowed the parish to govern its own finances. Its bylaws stated that a lay board would control the church’s property and assets while the archbishop would appoint the board and pastor.

Much of Hettenbach’s opinion centered on changes to the church’s bylaws in 2001 and 2004 that eventually allowed the board to eliminate the authority of the archbishop over those church decisions.

The archdiocese sued the St. Stanislaus Parish Corp. in 2008 to regain control of the church’s assets and property from the church’s lay board.

Hettenbach found that none of the language in the changed bylaws conflicted with the board’s purpose in the original articles of agreement.

“The Archbishop may own the souls of wayward St. Stanislaus parishioners, but the St. Stanislaus Parish Corporation owns its own property,” the judge wrote in his decision.

At the time, Carlson said the court had ignored the right of the Catholic Church to determine its own internal legal principles “and has substituted his own analysis of Church law.”

Despite the turn of events, Bozek said the congregation would not be celebrating, in deference to Ash Wednesday, “but the happy news has made our fasting a very rewarding experience.”

News
Catholic groups from Mexico, Central America and US ask bishops for support in helping migrants
Follow us on Facebook!
Submit your photos to RNS