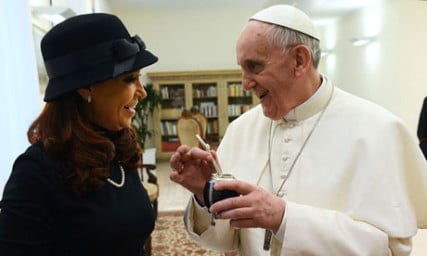 When Argentina debated legalizing same-sex marriage, the cardinal who would become Pope Francis proposed to his brother bishops that the church publicly endorse same-sex civil unions in an attempt to reserve marriage for one man and one woman. What then Cardinal Bergoglio put on the table was a compromise to offer protections to same-sex couples, which he apparently told confidants he believed were needed, while keeping a traditional definition of marriage on the books. His peers balked, and he suffered his only defeat during his time as head of the Argentine bishops conference, according to an article from the New York Times.

This new detail is but the latest in a string of episodes that is delighting Catholics across the political and ecclesial spectrum (am I the only one to raise an eyebrow at the hourly NPR updates on Francis’s every move?). Francis brings a pastoral sensibility to the papacy, something the more reserved and professorial Benedict XVI wasn’t quite able to accomplish. As pastor to the world’s Catholics, and a moral leader to many others, might Francis bring his pragmatic views on LGBT issues to the global stage? He is poised, if he so desires, to make huge advances for the church in how it treats its gay and lesbian members, all without engaging in the divisive doctrinal battles that would accompany an adjustment of church teaching on sexuality.

First, a simple shift in emphasis. Yes, canon law condemns homosexual acts, but it also calls for unmitigated respect for all people, gays and lesbians included. Yet too often we hear words of condemnation. Imagine Pope Francis preaching, with the power of his office, that gay men and women in the West and, perhaps more importantly, in places like Russia and Uganda, were to be not only tolerated, but loved, and that any laws placing hardship on these individuals was indeed unjust.

Next, Pope Francis could include more lay people from diverse backgrounds in his curia, the Vatican bureaucracy that runs the church and advises the pope on important issues. That Francis seems more attuned to the needs of Catholics living their lives in the real world is because he has lived among them. It’s well known now that the growing acceptance of LGBT people is due in part to people actually knowing someone who is gay or lesbian: as more people come out, families learn to love and accept. If Francis continued to rely on the insight lay people, especially women, he might appreciate the struggles gay and lesbian people face and become something of an advocate on their behalf.

Finally, Pope Francis might encourage local bishops to drop their opposition to civil same-sex marriage laws, provided that accommodations are made so that clergy can opt out, and instead focus on efforts to strengthen marriage and families. Francis is the first pope to hail from a country where same-sex marriage is legal. He saw firsthand that society didn’t crumble. Widening the circle will only strengthen marriage.

Pope Francis has shown the world that he is a man of deep humility, with evident holiness, and, above all, operating with a touching pastoral sensibility. No one expects him to usher in an era of liberalism on issues of sexuality, and he said some hurtful things during the marriage debate in Argentina. But Pope Francis seems capable of changing the tone the church employs in these emotional conversations. He is enjoying a rare moment when the Catholic Church is the recipient of much positive press and general good will, results of his staggeringly simple but profound choices during the first days of his papacy. He has talked movingly about his love for the poor, the disabled, and the exploited. How he chooses to respond to the needs of LGBT people will solidify his reputation as a pastor who stands in solidarity with those whom society—and the church—has marginalized.