(RNS) When New York Cardinal Timothy Dolan told national news programs on Easter Sunday that Catholic leaders need to do a better job of showing that their opposition to gay marriage is not “an attack on gay people,” the nation’s top Catholic bishop seemed to be signaling an important shift in tone, if not policies, that acknowledges two new realities. 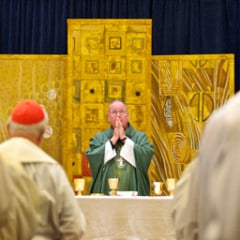 Archbishop Timothy Dolan of New York, president of the U.S. Conference of Catholic Bishops, celebrates Mass for other bishops at their summer meeting in Bellevue, Wash. (2011) RNS photo by Stephen Brashear.

One is the election of a new pope, Francis, who in less than a month has demonstrated a clear preference for engagement and inclusion (washing the feet of women and Muslim inmates at a Rome youth prison, for example) rather than the confrontation and political purism that often found favor under his predecessor, Benedict XVI.

The other is the ongoing shift in favor of same-sex marriage in the court of public opinion and — if recent arguments on Proposition 8 and the Defense of Marriage Act are any guide — perhaps soon in the U.S. Supreme Court.

Dolan himself has always been viewed as a more pastoral figure than many hard-line American prelates. As president of the U.S. Conference of Catholic Bishops, he’s tried — whenever possible — to steer the hierarchy on a politically realistic course, even when he’s eagerly taken on the White House when needed.

Christopher Hale, co-founder of the Millennial blog for young Catholics and an adviser for President Obama’s re-election campaign, said he’s had constructive exchanges with Dolan, and said Dolan’s office had responded positively to Hale’s March 26 Washington Post column that urged the very kind of pastoral shift on gays that Dolan seemed to adopt.

Hale also cited a Religion News Service column by Michael O’Loughlin calling for a shift in emphasis that he said Dolan’s office also appreciated. “I know he listens,” Hale said of Dolan. “I know he has his finger to the wind on this issue” of the church’s attitude towards gays and lesbians.

Other leaders apparently do as well. Cardinal Donald Wuerl of Washington, and his predecessor, Cardinal Theodore McCarrick, were also on Sunday morning news shows addressing the issue of gay rights and stressing that the church needed to be welcoming. As McCarrick put it, the church could be open to civil unions as an alternative to gay marriage.

Interestingly, it’s the same tact Francis tried to take in Argentina, voicing support among Argentine bishops for civil unions against a national bid to allow gay marriage. He ultimately lost both battles.

Church officials insist that the Catholic bishops have always taken a “hate the sin, love the sinner” approach, and that the positive comments by Dolan and other churchmen are nothing new.

“A disagreement on the definition of marriage is a serious disagreement. It is not, however, separation from the love of God,” Sister Mary Ann Walsh, a spokesperson for the USCCB, wrote in a blog post.

Yet that’s not the message many bishops had been sending. During the 2012 presidential campaign, a number of bishops said that those who support civil marriage for gays should be barred from Communion, and Dolan and other bishops cast the battle over gay marriage, and against Obama, in almost apocalyptic terms.

Other church leaders used especially harsh language to describe gays and lesbians, and some barred children from attending Catholic schools because their parents are gay. Many also equated support for civil marriage for gays with support for abortion, an action that is grounds for automatic excommunication.

As Dolan himself conceded on Easter, though, the bishops “try our darnedest to make sure we’re not an anti-anybody,” but up to now “we haven’t been too good at that.”

While gay rights activists in the church welcomed the change of tone as “nothing short of an Easter miracle,” in the words of Francis DeBernardo of New Ways Ministry, church leaders also stress that they aren’t softening their opposition to same-sex marriage.

At most, it appears that some leaders could be open to favoring civil unions or some alternative to gay marriage — an option that may not even be on the table anymore. Another strategy: shifting the focus from blistering opposition to gays and lesbians to ensuring that religious freedom and conscience rights are respected in future gay rights laws.

That itself could be significant, though it’s not clear whether that will be enough to alter the dynamic that has built up in recent years. To be sure, the hierarchy will also face strong calls from its right flank to take a more vocal stand against gay rights.

“Why aren’t their (Catholic) bishops appearing on the tube with David Gregory and Piers Morgan to defend the institution of marriage as a union of one man and one woman?” Michael Reagan wrote in a March 28 column at the conservative news site, Townhall.com.

“Like the bank executives that are too chicken to stand up to the federal bullies in Washington, and like the energy company bosses in California who won’t stand up to the Green Socialists in Sacramento, the churches cower in fear.”