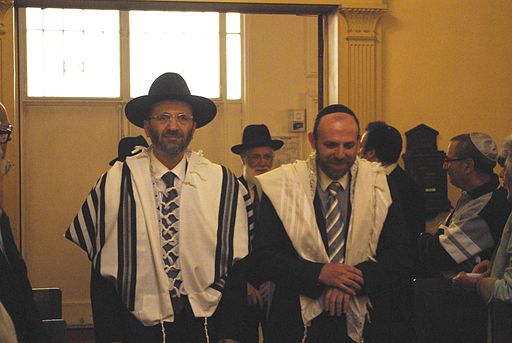 Rabbi Gilles Bernheim (left) offered his apologies for "borrowing" the work of others and lying about his academic credentials, ending a leadership crisis that has rocked the country's 600,000-strong Jewish community, the largest in Europe. Bernheim is pictured here with Rabbi Michael Azoulay. Photo courtesy Olevy via Wikimedia Commons (http://bit.ly/17SKTMR)
April 22, 2013
Elizabeth Bryant

PARIS (RNS) Amid a finance scandal that touched the heart of France's Socialist government, a quieter drama played out this month as the country's top rabbi resigned his post after admitting to plagiarism.

Rabbi Gilles Bernheim offered his apologies for "borrowing" the work of others and lying about his academic credentials, ending a leadership crisis that has rocked the country's 600,000-strong Jewish community, the largest in Europe. Rabbi Gilles Bernheim (left) offered his apologies for "borrowing" the work of others and lying about his academic credentials, ending a leadership crisis that has rocked the country's 600,000-strong Jewish community, the largest in Europe. Bernheim is pictured here with Rabbi Michael Azoulay. Photo courtesy Olevy via Wikimedia Commons (http://bit.ly/17SKTMR)

Now, as the search begins for a new grand rabbi, questions are mounting about which direction the religious leadership will take -- notably whether it will continue Bernheim's move toward a more "modern" and perhaps more inclusive French Judaism, or return to a more inward-looking faith.

"Bernheim's personality attracted a certain consensus among intellectuals — even some non-practicing or believing Jews — because he advocated the need for Judaism to be open to the current issues facing society," said Martine Cohen, a specialist on Judaism at GRSL, a Paris-based research center on religion and secularism.

So far, no clear candidate or path forward has emerged, and elections for a new grand rabbi are not expected for months. It is also unclear whether the 60-year-old Bernheim can or will return to his post. For now, two senior rabbis are filling in.

Some critics are calling for a strong leader to shake up what they describe as a lethargic religious power structure  —  notably the Central Consistory, the chief religious authority composed of hundreds of synagogues in France and its overseas territories.

"Could the consistory be changed to also include Reform or Conservative Jews?" asks Cohen, describing more progressive branches of Judaism that are far more popular in the U.S. than in France. "That is not likely. But perhaps it could find a grand rabbi who is open to exchanges, without being afraid to be criticized as too liberal or too lax."

Born to a family of Ashkenazi Jews who traditionally led French Judaism, Bernheim won a hard-fought campaign for chief rabbi in 2008. His predecessor, Tunisian-born Joseph Sitruk, reflected the newer face of the faith, following the influx of tens of thousands of Sephardic Jews from North Africa a half-century ago.

While both men are Orthodox, observers say Bernheim nudged the community away from Sitruk's more "traditional" approach, reaching out to women, civil society and leaders from other religions.

"He's a rabbi who has done enormous things for the community," said Nathalie Cohen-Beizermann, who holds senior posts in several Jewish organizations. "He's really advanced the status of Jewish women, in terms of religious divorce, in terms of violence toward women, and other projects that haven't yet been realized."

With Bernheim sidelined, "I'm afraid everything will grind to a halt," she added. "I'm persuaded that the next rabbi won't carry on his initiatives." 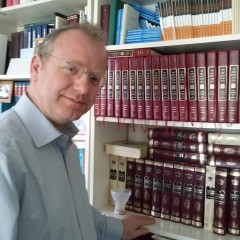 Conservative Rabbi Yeshaya Dalsace, a critic of Bernheim and of France's Central Consistory which he says is slow to respond to the needs of French Jews. Photo courtesy Lisa Bryant.

Bernheim also reached out to gay Jews, according to Conservative Rabbi Yeshaya Dalsace, who leads a synagogue in eastern Paris. After Bernheim signed a 2011 declaration against homophobia, many were surprised, Dalsace said, when the grand rabbi came out strongly against the government's plan to legalize gay marriage. He published a lengthy essay that was praised by the Vatican — and which also included parts that may have been plagiarized.

Dalsace criticizes Bernheim for speaking out about a political topic ― "Judaism here has always remained neutral on these questions" ― but not for building bridges.

"Rabbis here are not at all trained to receive homosexuals and to understand their problems," Dalsace said. "But the Grand Rabbi was open."

Dalsace is also fiercely critical of the larger institutional framework of French Judaism. Many synagogues are far more orthodox than the Jews who attend them, he said, and the Central Consistory is slow to respond to practical questions about interfaith marriages and divorce.

"To really change things you'd need a grand rabbi and administrators with a vision," he said. "But these are people who haven't really thought about the future of Judaism. I don't think the next (rabbi) will do anything, change anything."

Others downplay the divisions within the community and doubts about its future.

"There are differences in behavior, which are absolutely known and common," said Richard Prasquier, president of the Representative Council of French Jewish Institutions, an umbrella body that does not include the consistory. "But what we have in common is the large, large, large majority of French Jewry who have very strong feelings about Israel."

Orthodox Rabbi Mendel Azimov of Paris also believes France's Jewish community is more unified and vibrant than critics claim, and argues that congregations expect their synagogues to be traditional.

"In France, people know that you need to have the Orthodox look in a temple," he said. "If they go, they like to go to the right place."

Still, Azimov agreed that French Judaism should be inclusive.

"A chief rabbi should represent all types of Jews," he said. "He has to be open-minded. But at the same time, he has to keep to Jewish law."