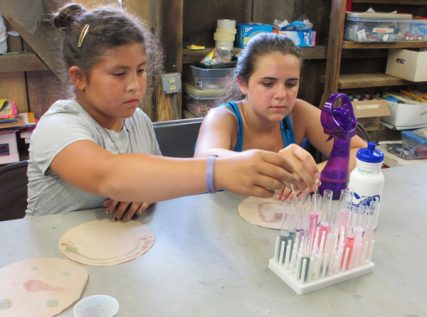 UPPER MARLBORO, Md. (RNS) Beneath the shade of a pavilion, a group of children discuss the difference between atheism and agnosticism.

Most campers participating in this woodsy Socrates Cafe identify as atheists — one was raised Mormon, another said she would feel comfortable changing her views if she found reason to believe in God.

And then, the voice of a teenage boy: “I feel as if I’m too young to decide,” he said, adding that he’s still exploring his options, evaluating the evidence.

That is the answer counselors at Camp Quest Chesapeake love to hear.

In 2012, more than 28,000 churches and missions hosted LifeWay Vacation Bible School, with some 2.7 million campers and adults enrolled in the Southern Baptist Convention’s summer program.

But for the growing number of people who don’t identify with a faith — 51 million Americans are religiously unaffiliated — Camp Quest fills a void.

Here, kids paint coffee filters with mystery liquids to see how they react to different pH levels, or run to the “coolzebo,” a tent outfitted with mist to offset the nearly 100-degree temperatures.

Sarah Menon started Camp Quest Chesapeake three years ago after serving as a Camp Quest counselor in other parts of the country.

“For me, it’s always been a place where I can try things, push my limits and grow as a person,” said Menon, Chesapeake’s assistant camp director. She said the number of secular families in the Washington area created a good market of interested people. 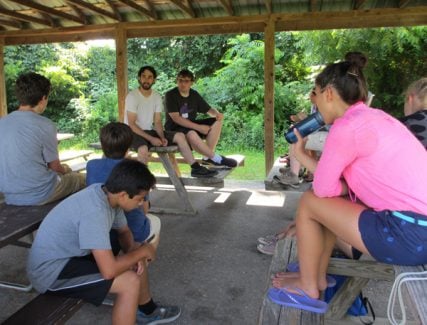 The first Camp Quest, held in northern Kentucky in 1996, served about 20 campers. This summer, Chesapeake brought 34 staffers and 74 campers to this community south of Washington for a weeklong residential camp.

Approximately 850 campers between the ages of 8 and 17 will attend a total of 17 weeklong Camp Quest sessions nationwide. Early registration was $500 for the first camper and $475 for each additional camper from the same family.

August Brunsman, executive director for the Secular Student Alliance, said he was astounded by the growth of Camp Quest, which will open a New England camp next summer.

“Look at our numbers,” Brunsman said. “It’s really easy to be optimistic about the future of secularism in the United States.”

Camp Inquiry, a Center for Inquiry initiative that targets a similar audience, opened in 2006. Located in Holland, N.Y., it hosts about 50 kids for its weeklong residential session, which includes visitors such as physicist Leonard Tramiel.

Karen Strachan, camp director, said the No. 1 rule the humanist camp espouses is respect — for ideas, people and places.

Both camps have reached full capacity the last few years.

“It’s just a place where you can be supported, and I think that’s really what Camp Quest gives to us — a place to be supported even when we don’t conform to the regular societal norm of religion,” said Marshall Lynn, a 17-year-old camper from Chapel Hill, N.C.

While Lynn said many of his friends share his beliefs — he identifies as agnostic and Unitarian Universalist — not all of the campers feel their beliefs are accepted at home.

Madisen Judge, another camper from North Carolina, said it’s difficult to be “out” at school as an atheist. For her, Camp Quest is a “security blanket.” 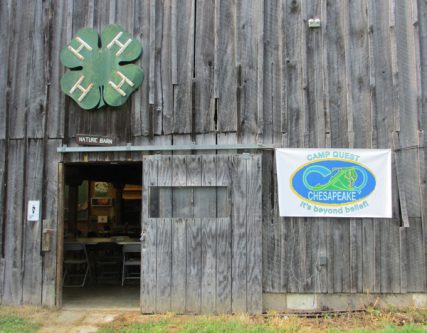 “I know every summer I can go somewhere where everyone’s totally nerdy and awesome like me, and I can just talk to anyone here,” Judge said. “Not like back home. And I don’t have to feel guarded about anything I say.”

Though relatively young, Camp Quest has at least one tradition: Chessie, the Chesapeake’s version of Nessie, the Loch Ness Monster.

All Camp Quests have magical, invisible creatures. The point of the creatures is not to mock religion, but to prepare campers for conversations where they might argue the minority position.

Counselor Tim Jessup, a 25-year-old analytical chemist from Australia, said he wants the campers to be open to questioning.

“I love that in staff meeting we really sat back and thought, might we be brainwashing these kids? How can we stop doing that?” Jessup said.

But many campers have already made up their minds.

“I don’t believe that a person could rise up and be dead and go back to the sky,” said 8-year-old Alexis Gilmore of Virginia. “I don’t think that could happen. Like, nobody’s done that before.”

But for now, Alexis is more interested in hurling pies at counselors’ faces. As long as someone’s nice, she added, “I don’t care if they’re atheist or not atheist.”