ROCKVILLE, Md. (RNS)  One year after a gunman opened fire in a Sikh temple in Oak Creek, Wis., killing six worshippers, Sikhs say they are hopeful about the future and even more determined to be better understood. 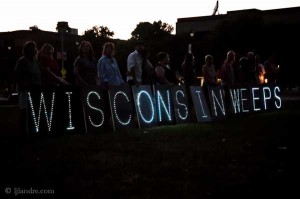 “The legacy of Oak Creek is not one of bloodshed,” said Valarie Kaur, founding director of the interfaith group Groundswell, a project of Auburn Seminary in N.Y.

“(It’s of) how a community rose to bring people together to heal and to organize for lasting social change,” she told the PBS television program “Religion & Ethics NewsWeekly.”

Sikhs first came to the U.S. 100 years ago, and they now number about half a million people. Many say they continue to face discrimination and misunderstanding. Sikh men are often mistaken for Muslims because of their turbans and beards. Following the Sept. 11, 2011 attacks, Sikhs have often been wrongly targeted.

An activist and a filmmaker, Kaur made a film about Oak Creek and was on site when the temple or gurdwara, reopened.

She said her first reaction to news of the mass shooting was despair. Then her phone started to ring.

“People from all different colors and faiths were reaching out to me personally to tell me that they were with us,” she said. “There was an outpouring of love and support that the Sikh community had never experienced before.”

Soon after the massacre on Aug. 5, 2012, Oak Creek Sikhs gathered to pray for each of the victims. They then named the gunman, Wade Michael Page, who fatally shot himself in the parking lot, and prayed for him, too.

In the weeks that followed, numerous interfaith vigils and special events were held in solidarity with the community. It was a source of encouragement for Sikhs, but also an opportunity to educate people about their religion. Sikh leaders say a new sense of identity began building in the community. Attendees sign a banner during the prayer vigil for the victims of the Oak Creek Sikh temple shooting on Wednesday evening, August 8, in Lafayette Park in view of the White House. RNS photo by Chris Lisee

“A lot of Sikhs have come out stronger because they felt this is the time my community needs me,” said Rajwant Singh, chairman of the Sikh Council on Religion and Education.

One year later, Sikhs can point to solid accomplishments. An interfaith campaign led by the Sikh Coalition and other groups successfully pushed the U.S. government to begin tracking hate crimes against Sikhs and other religious minorities.

Now the community is urging the military to change its policies banning service members from wearing turbans or uncut hair.

At Camp Gurmat, a summer camp in Maryland for Sikh-American kids, young campers such as Jagjot Kaur, 15, say they take pride in being a Sikh.

Others, like 15-year-old Harnoor Singh, try to combat bullying at school and counter the kids who call him Osama (after Osama bin Laden).

“If you don’t tell them right there that, ‘No, I’m actually not a Muslim, I’m a Sikh. This is what we believe in. This is who we are. And we are in no way affiliated with any terrorist group,’ that ignorance keeps spreading and eventually, you have every Sikh kid made fun of,” he said.

Many Sikhs say the Oak Creek tragedy drew them closer to their faith, and especially to the teaching that they must maintain a spirit of “chardi kala,” (CHAR’-dee KAH’-lah), or optimism and hope.

“Even though we still face profiling and bullying and racial slurs and continued hate-violence, despite all of this, I still have deep hope, because I look to the resilience and the courage embodied in our young people,” said Kaur.  “I know that this generation, like generations before it, will carry on the banner of chardi kala, the Sikh spirit, and the American spirit for years to come.”

(A version of this story was first broadcast on the PBS television program “Religion & Ethics NewsWeekly” (www.pbs.org/religion.))