(RNS) Eva Piper considered herself a shallow Christian until the accident that revitalized her faith and turned her Baptist pastor husband, Don Piper, into the best-selling author of “90 Minutes in Heaven.” 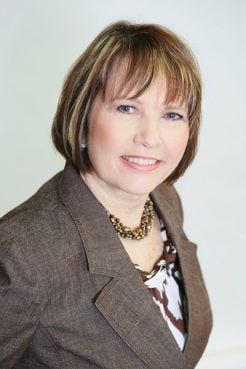 Eva Piper considered herself a shallow Christian, that is, before the accident that revitalized her faith and turned her Baptist pastor husband, Don Piper, into the best-selling author of “90 Minutes in Heaven.” Photo courtesy Roslan & Campion PR

“It wasn’t until Don’s accident that I really opened myself up to a really honest relationship with the Lord,” said Eva Piper, who says she’s embarrassed to recall her superficial faith.

Eva Piper writes about life after her husband’s alleged visit to heaven in “A Walk Through the Dark,” released on July 30. Her book comes nine years after the publication of her husband’s book, which spent more than five years on The New York Times’ best-seller list.

While the survivors’ tales of visiting the Pearly Gates have been a boon for publishers, they’ve also had a more direct impact on spouses and parents. For the family members, life — and faith — changes nearly as much as it did for the men they nearly lost.

Don Piper was hit by a semi-truck while driving home, and paramedics pronounced him dead at the scene. But, 90 minutes later, he said he was prayed back to life by a fellow pastor.

Eva Piper’s book, which is more of a practical guide for caregivers, recalls her frustration with her husband’s disappointment at being brought back to earth and long nights spent beside hospital beds asking God “Why?”

The niche genre of “to-heaven-and-back” books have hit bookshelves with surprising regularity — and success — in recent years. The popular book “Heaven Is for Real” is being adapted into a movie, coming out in 2014.

Todd and Sonja Burpo, the parents whose 4-year-old son Colton is the subject of “Heaven Is for Real,” have their own book out, “Heaven Changes Everything,” about the impact that their son’s near-death experience had on their lives. The original book has sold more than 7.5 million copies after 22 printings. 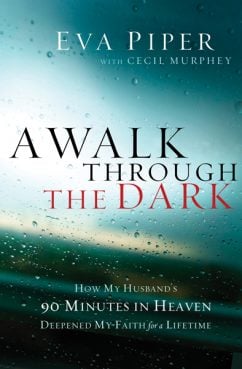 Eva Piper tells her perspective of life after her husband, Don’s alleged visit to heaven in “A Walk Through the Dark,” released Tuesday (July 30). Photo courtesy Roslan & Campion PR

Writer Paula Black has recounted her husband Dale’s trip to heaven following a plane crash he survived at age 19. She intersperses her narrative with questions she asked her husband, ones she thought a reader would ask.

“We haven’t felt like it was the right time to do anything with it, but we probably will at some point,” Paula Black said of the as-yet-unpublished book.

“That’s because it’s impacted me so much.”

Her husband wasn’t initially interested in being “one of those people” writing about something that can’t be proven. But eventually, she said, it had such an impact on her that he finally agreed to include it in his 2010 book, “Flight to Heaven.”

“It has completely transformed my faith,” said Paula Black, who didn’t hear about her husband’s trip to heaven until 40 years after the fact.

She said Dale Black’s experience allowed her to grasp the concept of “God is love,” which took on a new reality and depth after he told her about heaven. Raised Christian, Paula Black said talking with her husband about his experience brought substance to her faith, and enriched Scripture.

“It changed my understanding of who God is,” she said. “I had a saving relationship through Jesus, but it brought it so much alive.”

Her husband originally planned to write a book about surviving a “non-survivable crash,” but when Paula Black found out he’d been to heaven, she said that had to be in his book. “It has defined you,” she told him. “Heaven changed you.”

Both wives said that their husbands’ accounts made heaven more real for them. The same is true for Annette Wiese, whose husband Bill Wiese penned “23 Minutes in Hell” in 2006.  She said she had never given much thought to hell before the book.

“I never realized how important the decision of faith is to that degree and impact,” she said. She believed her husband’s vision right away, “because I knew his character.”

Despite the positive approaches and renewed faiths of these wives, many critics have worked to dispel firsthand afterlife accounts.

Esquire magazine recently reported on Eben Alexander (author of “Proof of Heaven”) as a man looking to reinvent himself in the wake of a rocky neurosurgery career. Oliver Sacks, a noted neurologist, recently dissected the scientific explanation for out-of-body and near-death experiences that lead to religious epiphanies in The Atlantic.

“While it is understandable that one might attribute value, ground beliefs, or construct narratives from them, hallucinations cannot provide evidence for the existence of any metaphysical beings or places,” Sacks wrote. “They provide evidence only of the brain’s power to create them.”

Eva Piper said she’s received a scattering of negative emails and notes, “but far less than I imagined.” Most people, she said, “really, really want to know about heaven. They want to know that there’s a better place than where we’re living now.”