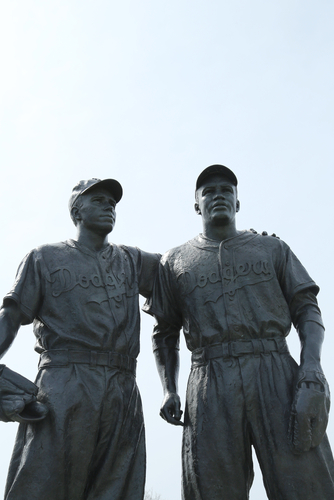 Statue of Pee Wee Reese putting his arm around Jackie Robinson, depicting the moment in 1947 when Reese signaled to a hostile crowd that Robinson, the first black player in major league baseball, was one of the team. The statue, outside a Coney Island minor league field, was defaced this week with a swastika and racial and anti-Semitic slurs.
August 8, 2013
Lauren Markoe 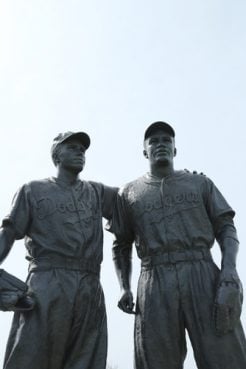 Statue of Pee Wee Reese putting his arm around Jackie Robinson, depicting the moment in 1947 when Reese signaled to a hostile crowd that Robinson, the first black player in major league baseball, was one of the team. The statue, outside a Coney Island minor league field, was defaced this week with a swastika and racial and anti-Semitic slurs.

In a story that has struck a nerve with readers, our own David Gibson taps into a strong current of frustration with Pope Francis among traditional Catholics, who find unsettling the pope's relative disinterest in fighting gay marriage and abortion, and wonder about his distaste for the trappings of the papacy. Gibson quotes conservative Catholic blogger Katrina Fernandez:

How can I love a Pope who doesn’t even want to be Pope?

Responding to such concerns, Boston Cardinal Sean O'Malley is assuring that the pope is merely protecting the unborn in a different way. O'Malley said this week:

The Holy Father is showing us very clearly that our struggle is not just a political battle or a legal problem, but that we must evangelize and humanize the culture, then the world will be safe for the unborn, the elderly and the unproductive.

Catholic News Service takes a look at the variety of stuff - from hats to bishops' rings -- hurled lovingly at the popemobile. Apparently, in Rio, four "Jeep-fuls" of gifts were thrown.

Sister Simone Campbell has tapped our own David Gibson to help her write her memoir. In April, HarperOne will publish "A Nun on the Bus," writes Michelle Boorstein of the Washington Post. Also, my buddy Dave told me, so I'm feeling very much an insider.

Secretary of State John Kerry yesterday tapped Wesley Theological Seminary's Shaun Casey as the first ever head of the state department's new office: The Office of Faith-Based Community Initiatives, not to be confused with the White House's Office of Faith-based and Neighborhood Partnerships. The first order of business is for the two offices to have a meeting on whether to capitalize the "b" in "Faith-based." Not. Here, read my story. I explain it in an adult manner.

Over at Religion Dispatches, Austin Dacey is none too impressed with this State Dept. project.

Many would argue that one of the greatest moments in baseball history was in 1947, when Brooklyn Dodger Pee Wee Reese put his arm around Jackie Robinson, the first black player in Major League ball. It happened in Cincinnati, on a field particularly hostile to Robinson. The story is told well in a book I enjoyed: Richard Eig's Opening Day: The Story of Jackie Robinson's First Season.

The reason I'm bringing this up today: A statue depicting that moment, outside a minor league field on Coney Island, was defaced this week with a racial slur, a swastika and anti-Semitic language, The Forward reports.

Two men are on trial in California this week because they read the Bible aloud -- loudly -- at the DMV.

Our friend Bob Smietana writes about a new reality show on Pentecostal snake handlers, called "Snake Salvation," based on a series of stories he wrote for the Tennessean.  You can watch it on the National Geographic Channel starting on Sept. 10. Why did it take so long to give snake handlers a reality show?

Smietana reminds us of why snake handlers handle snakes: a little-known passage from the Gospel of Mark.

And these signs shall follow them that believe; In my name shall they cast out devils; they shall speak with new tongues; They shall take up serpents; and if they drink any deadly thing, it shall not hurt them; they shall lay hands on the sick, and they shall recover.

The military is set to offer benefits to the spouses of gay service members but may reverse earlier plans to cover partners of unmarried gay soldiers and sailors.

A group of American Episcopalians scheduled to fly out of Nairobi Monday are safe despite the massive fire that engulfed the city's airport yesterday.

So you've heard about that new study that asks people if they would like to live until 120? Corrie Mitchell has broken down the results by religion, and finds that black Protestants and Hispanic Catholics are the most likely to want to live as long as Moses.

A Hebrew public school is opening in Washington, D.C. this week -- joining the ranks of about a dozen such schools around the nation. Its founders and staff are bending over backward to make sure in no way gives the appearance of being a Jewish school. Here's the story I wrote after visiting the school and interviewing its executive director, who is known in his home parish as the Rev. Jason Lody, and, as you might have guessed, is not Jewish.

A judge has upheld the murder charges against the Pennsylvania Christian couple in the death of their baby, who they tried to heal by faith. The judge noted that his decision might have been different had another child of the couple not died under "strikingly similar circumstances."

The list of plaintiffs in the sex abuse lawsuit filed against Yeshiva University is growing fast.

There are more than three dozen Jewish members of Congress. The only Republican one, House Majority Leader Eric Cantor, will lead 26 GOP members to Israel next week on a trip funded by AIPAC's educational affiliate.

Just because this is interesting: In the Washington Post OnFaith column today, Catholic theologian Jana Bennett responds to a recent Time magazine column in which Carolina Miranda argues: "Child-free adults are not selfish."

This is the last day for our very appreciated summer intern, Corrie Mitchell, who soon returns to journalism graduate school at NYU. We thank her for her professionalism, good humor and a slew of sharply-written stories -- from a profile of an atheist summer camp to a look at religious freedom in the military.

And thank you, if you read the Religion News Roundup . If you don't subscribe, please sign up below. It's free, and we won't spam you.