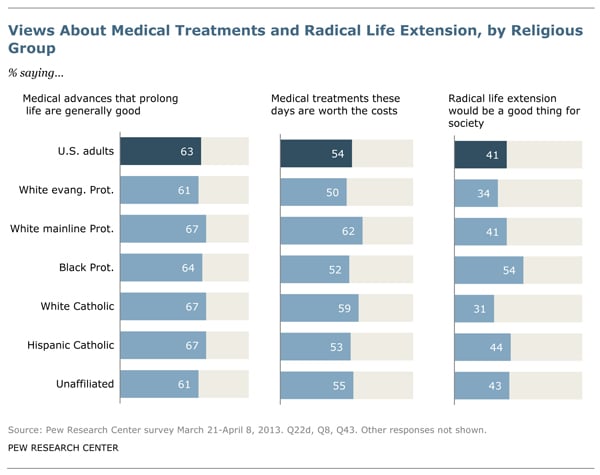 WASHINGTON (RNS) Noah’s grandfather Methuselah lived to the ripe old age of 969 and Moses reached 120, but most Americans would be happy to make it into their 90s, according to a new study.

Black Protestants and Hispanic Catholics are the most likely religious groups to say “radical life extension” — living to age 120 or more — would be good for society, according to a new Pew Research Center study, “Living to 120 and Beyond,” released Tuesday (Aug. 6).

The speculative “Living to 120 and Beyond” survey comes against the backdrop of U.S. Census Bureau projections that suggest by 2050, one in five Americans will be 65 or older, and more than 400,000 will be 100 or older.

Researchers found that four in 10 Americans, including 54 percent of black Protestants and 44 percent of Hispanic Catholics, say radical life extension would be “good for society.” Among religious groups, white Catholics showed the least support, at 31 percent.

The findings dovetail with previous studies that showed correlations between race and a desire to prolong life, including research suggesting black and Hispanic cancer patients were more likely than whites to seek aggressive end-of-life care and consider religion very important. 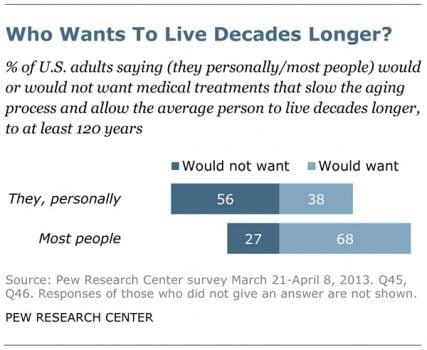 Who Wants to Live Decades Longer graphic – Reprinted with permission of the Pew Research Center, “Living to 120 and Beyond: Americans’ Views on Aging, Medical Advances and Radical Life Extension,” © 2013

Included with the Pew study was a compilation of religious leaders’ views about radical life extension, though no religious group in the United States has released an official statement regarding life-extending treatments.

The Rev. Charles Brown, a Payne Theological Seminary ethics professor and former Baptist pastor, told researchers: “I think we would embrace it because we welcome the blessings of a longer life so that we can make more of a contribution to society.”

Asked why blacks might be more in favor of life-extending treatments than others, Brown said, “We have gone from a sense of impossibility in the 20th century to one of possibility in the 21st, and I think we want as much chance as we can to participate in these new possibilities.”

Researchers quoted retired Pope Benedict XVI from 2010 to help explain white Catholics’ low approval rating of life-prolonging treatments: “Humanity would become extraordinarily old, (and) there would be no more room for youth. Capacity for innovation would die, and endless life would be no paradise.”

The frequency of a person’s worship attendance had little bearing on views of radical life extension. However, people who believe in life after death were more likely (43 percent) to say treatments that extend life would be a good thing than those who don’t believe in an afterlife (37 percent).

When it comes to personal desire for life extension, white evangelicals were least likely to want treatments (28 percent). Similarly low numbers of white Catholics (35 percent) and white mainline Protestants (37 percent) said they would want treatments to extend “life by decades.”

Black Protestants were split, at 47 percent, on whether they would want such treatments. Hispanic Catholics were similarly divided, with 46 percent wanting the treatments and 47 percent not wanting them.

The Pew survey was based on phone interviews conducted from March 21-April 8 among 2,012 U.S. adults and had an overall margin of error plus or minus 2.9 percentage points.