Who better to discuss religious freedom than the man tasked with promoting and defending it for the United Nations? 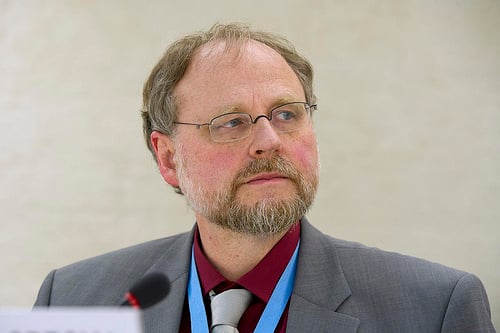 I caught up with Dr. Heiner Bielefeldt, U.N. special rapporteur on freedom of religion or belief, on the eve of his first official visit to Jordan last week. Speaking from the University of Erlangen-Nürnberg in Germany where he’s also a human rights professor, Bielefeldt discussed the fundamentals of religious freedom, how it fits together with other rights, some of the worst offenders around the world and the state of religious liberty in the Middle East.

The conversation started with a simple but loaded question: What is religious freedom? Bielefeldt acknowledged that defining it can be a tricky and often political endeavor — governments, scholars, people of faith and those of none sometimes tailor its definitions to suit their own interests.

He sees religious freedom first and foremost as a human right that protects human beings rather than one that protects particular belief systems:

“Religious freedom is as universal as any other human right and as liberal as freedom of expression. It protects a broad range of human freedoms like the search for meaning, the freedom to leave or change communities, to adopt a new faith, to spread one’s beliefs and to establish educational institutions. Like every other right to freedom, it’s about the right to equality.”

But religious liberty often comes into conflict with other rights, like when it’s summoned up to suppress free speech or to oppress women and sexual minorities. Bielefeldt said these examples are “problematic invocations” rather than legitimate uses of religious freedom.

Beyond such “subversion”, Bielefeldt identified three major obstacles to religious freedom around the world today:

“One of the biggest obstacles is hatred, collective manifestations of hatred caused by aggravating societal circumstances. Another big problem is that, increasingly, people think freedom of religion or belief might be superfluous or not a human right at all. Another big issue is the situation of religious minorities worldwide. Some minorities are harassed, stigmatized and treated as though they do not belong to the nation.”

In determining the worst state offenders of religious freedom, Bielefeldt thinks it wise to distinguish systematic state discrimination from society-based hostilities, citing China as an example of the former and Nigeria the latter:

“In China, it seems the general population doesn’t care so much [about religion]. It’s really restrictive government policies that threaten religious freedom. We see that with the Falun Gong in Tibet, Protestants and Catholics, the non-recognition of churches. Freedom of belief is facilitated by state administration. Unless the state registers a group, it is illegal. That goes against the spirit of human rights. Here it’s not the society really, but rather the state apparatus exercising oppression.

Bielefeldt said the Middle East, and Egypt specifically, are home to both systems of oppression and a host of other complicating factors:

“What we’re seeing now throughout the region is an enormous politicization of religion, especially of Islam. It’s a huge and complicated conflict that cannot simply be spelled out as Muslims vs. Christians. That would be too easy. In Egypt, there are Muslims and Christians on both sides of the political debate.

“Christians are now an easy target group for people to vent their frustrations. It’s about the identity of the country, about creating a new Egypt. Religion is a big part of that, but it’s not the only thing. One shouldn’t leave out unemployment, the desperate situation of youth, and disenchantment with the West and Western development strategies that have failed. It’s a complicated picture. Religion is a big part of it, but it’s not the key to understanding absolutely everything.”

On the international scale and particularly at the United Nations, Bielefeldt said the state and reputation of religious freedom have changed significantly in the past decade or so, notably around the discussion of religious defamation. Starting in the late 1990s, the Organisation of Islamic Cooperation, a group of 57 states that bills itself as the “collective voice of the Muslim world,” pushed for U.N. resolutions to prohibit such defamation.

Bielefeldt said these resolutions “cast a shadow” on religious freedom:

Red lines between religious liberty and freedom of expression surfaced amid these defamation debates when illustrations of the Prophet Muhammad, published in Danish newspaper Jyllands-Posten, resulted in violent protests around the world. These demonstrations in 2005 and 2006 were led by some Muslims who deemed the depictions blasphemous and offensive. Bielefeldt said the fact that global media organizations reprinted the cartoons amid threats of violence “made it clear that there is no such right as the right to be free from criticism.”

A U.N. Human Rights Council resolution in 2011 “put aside the discussion on religious defamation,” according to Bielefeldt, by considering and protecting both free speech and religious freedom.

Bielefeldt is currently finishing a report on gender relations and religious freedom, in part to further emphasize his assertion that religious freedom should not be viewed as a right in isolation:

“In this report, I’m speaking out against fragmentation, the idea that human rights should focus on gender or religion. Some people think it’s an alternative, an either/or of anti-discrimination. I don’t share this view. I believe all human rights are interrelated in a positive sense.”

Bielefeldt is scheduled to issue preliminary findings from his current mission to Jordan on Sept. 10, with a full report slated for 2014. 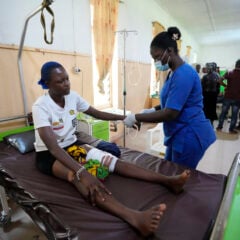