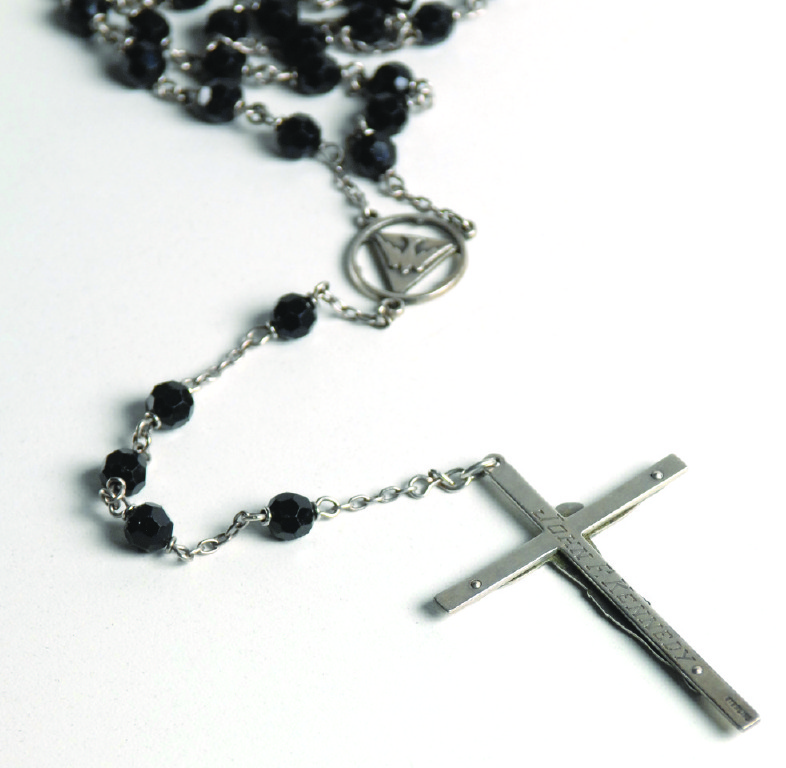 The reverse side of the crucifix on John F. Kennedy's Rosary, which will be up for auction this month, shortly before the 50th anniversary of his assassination.
October 11, 2013
David Gibson

The reverse side of the crucifix of John F. Kennedy's Rosary, which will be up for auction this month, shortly before the 50th anniversary of his assassination.

They're coming up for auction later this month, just ahead of the 50th anniversary of Kennedy's assassination in Dallas.

The black onyx beads, and a sterling silver crucifix with Kennedy's name engraved on it, were given by the president to his friend and special assistant, David Powers.

From the letter of provenance from Powers' son:

"Many consider my father to have been President Kennedy’s best friend and confidant. They campaigned together from 1946 to 1963, and traveled the world together on presidential visits. During their travels, they frequently attended mass and would always make 3 wishes at each new Church per Roman Catholic tradition."

"Kennedy would often relate that his wishes pertained to winning key states in the next election. The Rosary Beads and Silver Cross engraved ‘John F. Kennedy’ were gifted to my father by JFK and my father cherished them. My father was in the fateful motorcade in Dallas, right behind President Kennedy’s vehicle. I can imagine that reflecting with these rosary beads gave my father comfort in the years after the President’s death."

So I'm a waaaay post-Vatican II Catholic and the "three wishes" tradition is unfamiliar to me. But Kennedy wishing to win key electoral states rings true, from what we know of him.

More details from RR Auction of New Hampshire, which will handle the live bidding in Boston on Oct. 24:

Though one would not get his or her own rosary engraved, it was common for upper-class Catholics to do so when giving it as a gift; with Jackie’s known penchant for personalizing meaningful pieces that she gave her husband, and with her undeniable eye for the finest modern styles, it is likely that this was a gift to Kennedy from his wife. 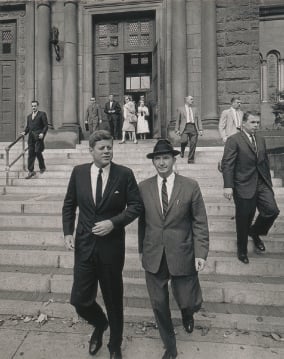 President Kennedy leaving the Cathedral of St. Matthew the Apostle in Washington, DC, with his friend and assistant, David Powers, on May 31, 1962. Kennedy gave Powers the Rosary that will be auctioned this month

Trying to balance family life with the pressures of political life, it is understandable that this rosary should show such wear, with the sterling heavily rubbed and the onyx beads slightly chipped.

“This is by far one of the most remarkable, personal pieces of President Kennedy’s that has ever come to auction,” Bobby Livingston, VP at RR Auction, says in a press release. “Holding incredible significance in its signs of daily use and its representation of the faith that carried him through life.”

So is bidding on these beads ghoulish or akin to buying a relic? I mean, JFK was no saint, but we hope for his soul as much as our own. Then again, the jokes this could prompt about the effficacy, or lack thereof, of a traditional prayer may raise a warning flag.

Then again, a portion of the proceeds of the sale will be donated to the David Powers Foundation, a non-profit helping The Boys and Girls Club and Military Families.

September 21, 2020
Related Posts
By Alejandra Molina
In Oregon, churches and anti-fascists unite to provide mutual aid to fire evacuees and others in need
By Amy Klein
What good is faith when your fertility treatments aren't working?
By Alejandra Molina
Who is Junipero Serra and why are California protesters toppling statues of this saint?
By David Crary
Amid pandemic, scores of US Catholic schools face closure
By Alejandra Molina
Four young people of different faiths move into a home together, then a pandemic happens