Malala Yousafzai is the toast of the day.    There was a strong campaign to have her receive the Nobel Peace Prize this year, she has been featured on Jon Stewart, and had a private audience with President Obama.  The White House tabbed this meeting to mark their “photo of the day.” Malala meeting at the White House with President Obama and family.

“President Barack Obama, First Lady Michelle Obama, and their daughter Malia meet with Malala Yousafzai, the young Pakistani schoolgirl who was shot in the head by the Taliban a year ago, in the Oval Office, Oct. 11, 2013. (Official White House Photo by Pete Souza)”

At the same time, there are also many who are writing pieces critical of her, or concerned about the way in which she can be appropriated by the West.   A New York Times article asked the question many are asking:  “Is Malala Yousafzai a heroine or Western stooge?”

In light of these competing projects, we need some careful analysis.

Let us begin by admitting that the very anxiety over what Malala is doing and should or should not be doing  smacks of a patriarchal nature.   This is a bold and courageous young woman who has stood up to misogynist bullies, been the victim of an assassination plot by getting shot in the face, and again risen above that to continue with her calling to promote the cause of girls’ education.  No amount of analysis or concern—even righteous concern—should take away her agency, her will, and her resistance.   To negate her agency, even by would be allies, is yet another attempt to negate her humanity.  I write my own words mindful of the above.

Here are five points to help us keep a healthy perspective on Malala the person and Malala the phenomenon.

It is all but impossible not to come away with a deep sense of awe of the grace, dignity, intelligence, and composure of this young woman who has been in the public spotlight since she was 11 years old.   And lest we forget:  she was shot in the face by the Taliban simply because she insisted on the right of girls to receive education.

If we have a few critiques, let us be clear that they are not of her, but rather of the way she might be used by Western powers to advance their colonial agendas.

Malala’s interview with Jon Stewart gave a beautiful indication of the strength of her conviction.    Her comments about how she wanted to respond to those who would come to kill her is a great testimony to her courage, and profound commitment to nonviolence in a way that is actually quite reminiscent of Martin Luther King’s teachings: I started thinking about that, and I used to think that the Talib would come, and he would just kill me. But then I said, ‘If he comes, what would you do Malala?’ then I would reply to myself, ‘Malala, just take a shoe and hit him.’  But then I said, ‘If you hit a Talib with your shoe, then there would be no difference between you and the Talib. You must not treat others with cruelty and that much harshly, you must fight others but through peace and through dialogue and through education.’ Then I said I will tell him how important education is and that ‘I even want education for your children as well.’ And I will tell him, ‘That’s what I want to tell you, now do what you want.’

2)    Malala is remarkable.  She is not, however, exceptional.

Malala is remarkable, but we must resist the urge to make her exceptional.  There is a long legacy to the exceptionalizing narrative when it comes to Muslims, and it works like this:   “The majority of folks ‘over there’ are either monsters or victims.   Every now and then, there is an isolated solitary hero that stands against that.   That hero supports ‘our’ values.”  That tendency to view the lone solitary hero(ine) of the Muslim masses, the need to have the solitary exceptional Muslim is part of the “good Muslim/bad Muslim” game.  And we are done playing these games.

Those of us who have spent years of our life living in and studying Muslim majority societies know that no one has a monopoly on goodness, truth, and beauty, or ugliness, evil, and cruelty.    These are human tendencies that percolate inside each and every single one of us.  And Muslim societies, like all societies, are filled with courageous people and communities who stand for what is just and beautiful.   Malala is a remarkable young woman, but she is neither an exception nor (in that sense) exceptional.   She is simply a beautiful personification of that courage and compassion.  But there are thousands of other courageous women and men in these societies who are going about living the poetry of their day-to-day lives, resisting evil, and striving for good.

3)    Malala’s inspiration is based on her own society.

It is well-known that Malala is struggling against the pathetic misogyny of the Taliban.  It should be well-known that the Taliban’s patriarchy actually violates the very teachings of the Prophet Muhammad, who stated unambiguously that the quest for knowledge was a responsibility for every man and every woman.    Malala is struggling against the patriarchal and misogynist tendencies of Muslim societies, that much is true.    But it also important to point out that her courage, her compassion, her conviction also arises out of the same society.   In short, it is her family, her community, and her faith that give rise her remarkable (though not exceptional) strength and beauty of character.

It is not often that I disagree with Jon Stewart.   He is quite possibly my favorite cultural critic, and my favorite comedian. That he can do both and weave them together is a testimony to his genius.

But I have to confess a profound discomfort with Stewart’s somewhat adorable comment to Malala “I want to adopt you.”  Yes, we understand the urge, and I don’t think Stewart’s comments were in any way malicious or intended as anything other than a spur of the moment adoration.   However, and this is an important point, Malala does not need to be adopted.  Nor is she available for adoption.   Her comments came right after she talked about how it has been the love and adoration of her own father that has given her wings to accomplish what she has.   She already has a father, she has a family.  And that family is as much a story of Pakistan, a story of Muslim societies, as the stories of the Taliban.

Malala is already rooted in a community, even as she is struggling to reform that community.    One can only adopt someone who is an orphan, without family, without communtiy.   None of these are true for Malala.   The extent to which she will be able to transform her own society will remain linked to the extent to which she remains grounded in her own community (while perhaps networking with international voices of resistance, human rights, etc.)

Malala reported that she had the following comments to President Obama about the American policy of drones:

“I thanked President Obama for the United States’ work in supporting education in Pakistan and Afghanistan and for Syrian refugees. I also expressed my concerns that drone attacks are fueling terrorism. Innocent victims are killed in these acts, and they lead to resentment among the Pakistani people. If we refocus efforts on education it will make a big impact.”

Words like authenticity are overused.   Yet if one is going to be a genuine Muslim reformer, and not one manufactured by or promoted by Western powers, it is vital to have and maintain a holistic sense of justice in which one speaks simultaneously against both abuses of Muslim extremists and Western colonial powers.    As for Malala, it means simultaneously to speak against the misogynist policies of the Taliban AND the violence inflicted on the people of Pakistan and Afghanistan by American drones.   It takes a bold person to speak that type of truth to power, especially when the power is the charismatic power of the Office of the President of the United States.

Yes, the Taliban are vile, misogynist, and violent group that has practiced gender apartheid in Afghanistan and has killed thousands of people who disagree with their bigoted ideology.

Here are the numbers from the U.K.-based Bureau of Investigative Journalism about the cost of drone attacks in Malala’s own Pakistan:

These are the hundreds of civilian casualties that we as Americans have killed in Pakistan alone.  To these, we have to add the dead in Afghanistan, in Yemen, in Somalia, in Iraq, the dead from sanctions in Iran, and elsewhere. 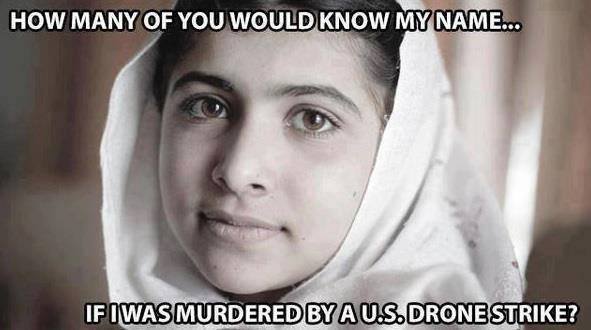 Would we know Malala Yousafzai if she was one of the hundreds of children killed by American drones?

In short, all of us, including the millions of people inspired by the example of Malala, have to move forward by insisting on a holistic sense of justice where we speak simultaneously against injustice here and injustice there, connecting the sanctity of life here to sanctity of life there.

The way for Malala is the same way for all of us:  to stand against brutality anywhere and everywhere, whether it is state-sponsored violence or terrorism violence.    A better future for all of us depends on this stance for a holistic sense of justice.