WASHINGTON (RNS) Who are the mainline Protestants today? Vintage Protestants? The VPCC — Vanishing Progressive Christian Church? The Legacy Church? Half a century ago, the denominations under the mainline umbrella dominated the American faith landscape. Now, after decades of declining numbers, only about one in five U.S. adults identifies with a mainline denomination such as United Methodists, the Episcopal Church, the Evangelical Lutheran Church in America, Presbyterian Church (USA) and American Baptists. Could replacing the “mainline” name help stem the slide? The challenge came from scholar and Presbyterian pastor Carol Howard Merritt. Writing in the venerable Christian Century magazine, she called for a new brand that conveys her view of the mainline’s rising diversity and social justice leadership. “The image of an all-white, elitist church is not going to fly for generations to come,” said Merritt, an author and speaker who lives in Chattanooga, Tenn. “’Mainline’ was a good historic marker but the future needs to reflect who we are now.” Tradition holds that the term “mainline” was born in the tony suburbs just outside Philadelphia, along the Pennsylvania Railroad Main Line, that defined the mostly white, mostly affluent churches in the area. Today, it could refer to Hillary Clinton, who once gave talks on Methodist religious principles, or to President Obama, who worships often at St. John’s Episcopal Church across from the White House.

Religion News Service took up the challenge, inviting votes and comments in an informal survey. More than 200 people voted, many posting comments that ranged from theological to historical, serious to snarky:

Most folks — a plurality, or 46 percent — preferred their own picks. Fans of the mainline highlighted historical faith and social gospel activism:

Church members attend a concent at the Episcopal Church of the Epiphany in downtown Washington, D.C., on Tuesday (Oct. 15). RNS photo by Kevin Eckstrom

Critics, however, skewered the mainline as a theological washout:

Deb Geelsdottir suggested refocusing the conversation on “Jesus first, last, and always” with the name “Red Letter Christian Church,” which draws on a Bible publishing practice that highlights Jesus’ words in red. Martha Carlson has another twist. “Since the evangelicals are now claiming majority, we should start calling them Mainline! They could then bear the weight of being ‘established,’ ‘establishment,’ or at least all being tarred by the same brush when it comes to popular opinion that all the members of a group think alike.”  Mainline scholar Diana Butler Bass, an Episcopalian, offered her own critique on Twitter: “We’ll change ours if ‘evangelicals’ change theirs.” John Leech offered “Legacy Denominations” because, he wrote, they are “like legacy airlines, carrying a lot of baggage from the past … But wait! I still have lots of miles to redeem!” Merritt ultimately came up with her own first choice : “Social Justice Christian.” To her, it conveys “the exciting and vibrant thought that has come out of our tradition in the last hundred years or so (to) … proclaim the good news that leads us to liberation and salvation.” KE/MG END GROSSMAN 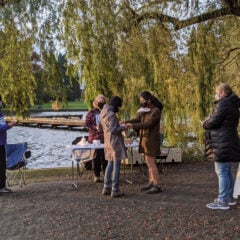