[tweetable]“It sounds to me as though secularism could be the new terrorism.”[/tweetable]

That remark by Father Aethelwine Richards of the Antiochian Orthodox Archdiocese of Europe pretty much sums up the sentiments faith leaders and human rights defenders shared at a conference in Brussels on Wednesday. 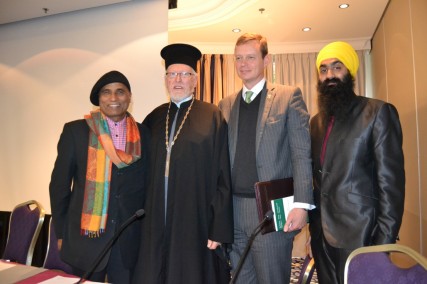 The event was originally scheduled to take place at the European Parliament but was recently moved to a hotel across the street. Godfrey Bloom, a member of Britain’s right-wing UK Independence Party and a member of European Parliament, said that several of his colleagues at the European Union encouraged the move because they disapproved of the conference’s organizers and attendees.

“We have intolerance on our own doorstep. The hypocrisy of that place!” Godfrey said of the E.U. in his welcome remarks.

Opening speaker and event organizer Eric Roux arrived several hours late for reasons closely tied to the conference’s focus. On Wednesday, France’s highest court upheld a conviction of “organized fraud” against the Church of Scientology, of which Roux is a minister and spokesperson.

The government of France classified Scientology as a cult in 2000 and has kept a close watch on its activities since the 1970s. Roux heavily criticized France’s anti-sect policies and warned the audience that such policies are being “exported” to the E.U. level.

Most panelists had harsh words for France, which has long followed the principle of laïcité, or church-state separation.

Bashy Quraishy of the European Muslim Initiative for Social Cohesion called France’s policies towards religion “secularism gone mad.” He referenced a 2004 law in France that banned the wearing of conspicuous religious symbols in public schools.

Jasvir Singh of United Sikhs International was expelled from school under this law for refusing to remove his turban. He said that France’s policies towards religion are less about security, as the government often claims, and more about instilling and promoting uniformity.

“We are supposed to be living in a tolerant human rights era. Instead, we live in a dictatorship of relativism, the worst form of religious persecution. Secular intolerance forces us to abandon our values, to be part of this festival of diversity. It is tantamount to apostasy.”

Hoping to move the conversation beyond France, I asked the panelists to name other countries in Europe where religious minorities are systematically discriminated against.

Quraishy flagged Denmark, Germany and Russia. Singh cited Italy, Spain and Belgium. Audience members mentioned the Netherlands and Austria. But all panelists agreed that France’s “harsh secularism” is the most worrisome.

After several hours of detailed legal and political analysis, Hans Noot of the Gerard Noodt Foundation for Freedom of Religion or Belief asked the audience to focus on the human element of this human right.

“Freedom of thought and expression doesn’t belong in courts unless society has failed,” Noot said. “We need to debate in the streets and on television, not just in the courts. It is a social debate.”

He ended with a borderline Lennonist hypothetical (John the Beatle, not Vladimir the Soviet): “What if our Euros don’t go to churches or groups anymore but sponsor projects that enhance religious freedom?”

Quraishy suggested that small and large religious groups should support each other against state discrimination and reach out to media to improve religious literacy.

“We kiss cheeks, but we don’t move forward,” Quraishy said of the many groups promoting dialogue rather than action to address religious freedom in Europe.

Let’s open the debate to you, the readers. How do you think individuals and groups should “move forward” on religious freedom in Europe and around the world? Chime in with a comment below.