(RNS) Last month, after being sure to get his caffeine fix at Starbucks, Southern Baptist leader Richard Land went where few evangelicals had dared to go before: the campus of Brigham Young University, the intellectual heart of Mormonism.

After lecturing on “family, faith, freedom and America,” Land attended a BYU football game with Mormon leaders and joined them to hear James Taylor sing with the Mormon Tabernacle Choir.

Is there a new detente — perhaps more practical than theological — between evangelicals and Mormons?

For more than a decade, Mormon and evangelical scholars have discussed their differences and similarities, and even written books together. But leaders of the two faiths appear to have reached a new juncture, with some on both sides seeing benefits in more public engagement.

“At the very least, the two communities, evangelicals and Mormons, have been … each other’s worst enemies,” said Richard Mouw, the former president of Fuller Theological Seminary and a longtime proponent of evangelical-Mormon dialogue.

“There’s a significant part of the evangelical movement that is now having healthy and friendly conversations, and it’s gone from a group of two dozen scholars talking to each other to church leaders meeting each other, going to see each other.”

John Taylor, director of interfaith relations for the Church of Jesus Christ of Latter-day Saints, said there is a growing sense that Mormons and non-Mormons can agree in some areas — from humanitarian aid, where Mormons have also joined with Catholics — to the desire to retain their younger members.

The recent Utah meetings, which came at the invitation of Mormon church leaders in Salt Lake City, have centered on faith, family and religious freedom. Mohler — who was careful not to paper over doctrinal distinctions in his BYU speech — addressed joint concerns about the intersection of those issues.

“That is why I and my evangelical brothers and sisters are so glad to have Mormon neighbors,” Mohler said in his talk on Oct 21. “We stand together for the natural family, for natural marriage, for the integrity of sexuality within marriage alone.”

In a statement, the Assemblies of God said “no restrictions were placed on Dr. Wood’s lecture” when he addressed some 400 BYU students on Sept. 16. He “shared freely” about his Pentecostal faith and being brought up in a missionary family.

Land, who considers Mormonism to be a “fourth Abrahamic faith” — and thus distinct from Christianity — said there has been “gradual increased understanding on both sides.”

He accepted the invitation to BYU because Mormons and evangelicals, with shared opposition to the growing national acceptance of same-sex marriage, need to face together what they both view as increasing religious hostility.

“Those who oppose us are not going to make any distinctions,” said Land, the new president of Southern Evangelical Seminary in North Carolina. “They’re hostile to people of faith, period.”

The outreach has gone both ways. In September, Taylor joined two members of the LDS church’s Quorum of the Twelve Apostles at the Washington installation of Russell Moore, who succeeded Land as head of the Southern Baptist Convention’s Ethics & Religious Liberty Commission.

“It’s clear where we disagree, but we’re standing together in the public square for religious liberty,” said Moore, who has recently spoken with Mormon officials about military chaplains’ religious rights. 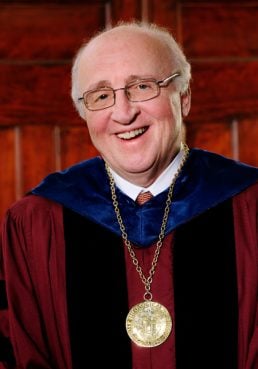 Bob Millet, a BYU religion professor who suggested the evangelical visitors to LDS officials, said the rapprochement helps Mormons, “a sample of the population that’s not well-understood and highly misunderstood.”

As Mormons continue to work toward greater acceptance and visibility — from Mitt Romney’s White House bid to a category of questions on “Jeopardy” — they are more likely to have tangible benefits from this engagement, said Stephen Webb, author of the new book “Mormon Christianity: What Other Christians Can Learn from the Latter-day Saints.”

“It’s not just the fact that evangelicals are being more curious about Mormons and being more willing to listen to them and learn from them, but it’s also a matter of the Mormon leadership itself wanting to be part of the American Christian mainstream,” he said.

Gregory Johnson, co-founder of Standing Together, a Utah group of evangelical pastors, has given dozens of presentations with BYU’s Millet called “A Mormon and an Evangelical in Conversation.” He dubbed the recent get-togethers “the year of the evangelical at BYU.”

Some scholars credit colleagues such as Johnson, Millet and Mouw with the thaw in relations, which still remain tense in some circles. Mouw, for instance, gets hate mail  — “a lot of angry stuff” — from pastors and groups that don’t agree with his friendships with Mormons.

The recent evangelical appearances in Utah have sparked online debates, with some welcoming them and others warning they hurt traditional Christianity. A moderator for the unofficial LDS.net who calls himself “prisonchaplain” concluded the meetings were more civil than groundbreaking.

“As far as ‘fruit’ goes, these events sure beat the cold theological wars of the past,’’ he said.

And there’s more to come: Christian apologist Ravi Zacharias, who spoke at the Mormon Tabernacle in 2004, will be at BYU in January, followed by a second appearance by Mohler the following month.